Retiree just needed to ‘give back’ 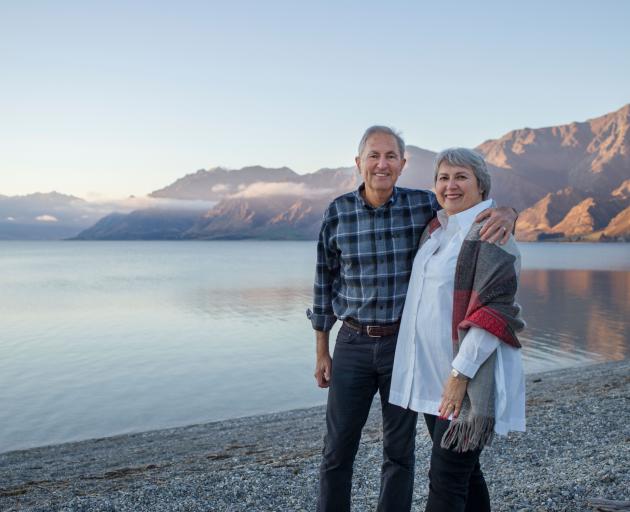 Ian Ball and April Mackenzie are happily settled at Lake Hawea. PHOTO: RACHAEL MCKENNA/NZ HOUSE AND GARDEN
When April Mackenzie returned to New Zealand after years working in big corporate roles overseas, her intention was to fully retire. But it hasn’t quite worked out like that, as business editor Sally Rae reports.

Giving back is a big motivator for April Mackenzie.

Whether that’s to New Zealand as a whole, or to her local community, she is grateful for the opportunities the country provided her, and those she experienced during years spent working overseas.

Four and a-half years ago, Ms Mackenzie and her husband, Ian Ball, returned to New Zealand, settling into retirement at Lake Hawea, an area chosen for its proximity to the mountains - Dr Ball is a keen snowboarder - and the outdoors.

It was a change of pace for the former corporate couple who had previously been based in London and New York; Dr Ball had served as chief executive of the world’s top accountancy body, the International Federation of Accountants, while Ms Mackenzie had a suite of international roles.

She relished overseeing the building process of a new house on their lakefront property and became involved with the Hawea Community Association, and was named 2019 Hawea Volunteer of the Year.

In December last year, she stepped out of retirement and back into corporate life as chief executive of the External Reporting Board, the independent Crown entity responsible for accounting and auditing and assurance standards in New Zealand.

"You know how some things have got your name on it," she mused this week.

"It just feels like giving back ... I learnt a lot while I was away and had lots of great experiences. I’m keen to develop my team of staff and have the chance to share my learnings with them ... to share that and develop them and influence what happens in New Zealand."

Growing up in Auckland, Ms Mackenzie recalled, at a very young age, wanting to be a mathematics teacher but her carpenter father said, "No, be an accountant." "I said, ‘What’s that?’ He said, ‘Don’t worry about it, just be one’."

She completed a master’s degree in commerce at the University of Auckland and taught corporate law and accounting at Manukau Polytechnic, before moving into an accounting firm.

After a stint working in the United Kingdom, she returned to Wellington for a job at the New Zealand Society of Accountants (now Chartered Accountants Australia and New Zealand) where she became divisional director of policy.

In 2002, her husband’s new role at the International Federation of Accountants took the couple to New York; it took her a while to warm to the city but she secured employment at an international accounting network where she set up its international financial reporting standards and public policy capability.

The couple were happily settled by the time they left about 12 years later.

"By then, you’d learnt how to order your coffee ... and how the system works," she said.

With Dr Ball stepping aside from his IFAC role, it gave them the freedom "to be anywhere" and they settled on London, where she was interim chief executive for the International Valuation Standards Council. But they both knew they would one day "come home".

"Overseas opportunities were huge and incredible and we thrived on them. But New Zealand’s New Zealand," she said.

During their time in New York, they bought a holiday home - "a little cottage" - at Lake Hawea, sight unseen, and then a patch of land on which they were to build their home.

Supposedly fully retired by the time they moved back, Ms Mackenzie enjoyed the building process, working with the building team to solve any issues or challenges, and she also became involved with the Hawea Community Association.

Community involvement was something that had been lacking in their previous lives and it was the first time the couple had lived in a small community. They found it to be extremely welcoming and they had made some very good friends in the area.

It was a very diverse range of people who chose to live at Lake Hawea, as she described it as a unique spot with its own challenges, including how it sat within the Queenstown Lakes District Council.

Despite her international corporate experience, Ms Mackenzie found her community association work "some of the hardest stuff I’ve ever had to do", saying the council, she believed, felt it knew better as to what was right for the community, than its residents did.

There was the controversial special housing area, a 480-lot subdivision approved by the Government and the QLDC under the 2013 Housing Accords and Special Housing Areas Act designed to streamline new housing developments.

Earmarked for a 34ha site in Cemetery Rd, it drew considerable opposition during the planning process from local residents concerned at its location outside the urban growth boundary.

Then there was the 16m Spark cellphone tower proposed for the town centre which was originally granted consent but, following an appeal lodged in the Environment Court by the association, Spark surrendered its consent and found an alternative site out of town.

"There’s something wrong with the system or process that a small community felt so disenfranchised and still feels it," she said.

Acknowledging it had been "a very strange year", Ms Mackenzie said her team had risen to the challenge and the organisation "hardly missed a beat" during Covid-19. Her predecessor had set up the organisation very capably to work remotely.

XRB had produced additional material to make it more evident to the public about what was going to happen to financial and audit reporting this year.

Using the mantra "transparency shapes society", it was about encouraging entities and directors to "shine a light" on how they had managed those Covid-19 related risks, and how they had demonstrated agility and pivoted in such challenging times.

"It’s not like people don’t know we’ve had Covid-19 and been in lockdown. To somehow pretend your organisation hasn’t been significantly impacted isn’t going to help anybody," she said.

XRB had been very focused on getting the message out about making sure that trust and confidence in reporting was maintained.

There was still a high level of uncertainty and markets were changing constantly; directors charged with governance - whether a NZX-listed company or a charity - needed to look at how they were going to manage and mitigate that uncertainty and look to the future, so an assessment could be made "based on the whole picture".

Financial statements were no longer just about historical cost numbers, there were many more estimates in them than there used to be.

"It’s about disclosing the uncertainty," she said.

There had been a real shift in society; while financial statements had a critical role to play, they were no longer the "be all and end all" in reporting by an entity.

No matter whether it was a charity or one of the largest corporates in New Zealand, society and investors were demanding a lot more information about their impact, and how they added value - "not just, how do you produce a return?".

XRB saw the demand for environmental, social and governance reporting growing in importance with climate-related financial disclosure probably the issue to be tackled first "because it’s large and looming".

It was a very exciting time to be involved in the sector; New Zealand had to find the right balance between being a standards taker - which was important because large entities in New Zealand and the Government needed to function in that international market - and developing domestic standards that were fit for purpose in New Zealand.

"We want to get the balance right between economic growth, environmental care and all of the things I guess New Zealanders stand for. It’s not all about the dollars."

Like many Kiwis, Ms Mackenzie was hard-working, determined, down-to-earth and with a "can-do" attitude, adopting the "just pitch in and solve the problem approach".

The couple had no regrets about making the move from big city life to small rural hamlet, the only down side being the distance from family. "Ian and I still pinch ourselves and say ‘How did we end up here?’ How fortunate are we."