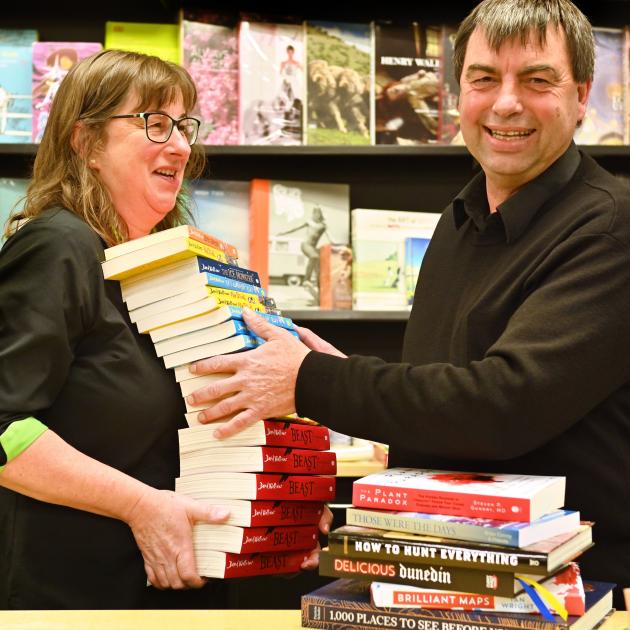 Golden Centre Paper Plus owner John Brenssell and his wife Jacqui reflect on an 11th hour surge in demand for books and games, before a planned multi-week national lockdown to fight Covid-19. PHOTO: CHRISTINE O’CONNOR
It was the best of times, it was the most uncertain of times.

As the fight to contain Covid-19 continues, Golden Centre Paper Plus owner John Brenssell could be forgiven for thinking something like this, as his bookshop, including a New Zealand Post outlet, faced a mandatory lockdown after two of its busiest trading days of the year.

Mr Brenssell said the shop had been "just about flat-out" on Tuesday.

The higher-than-usual demand had surged within an hour of Prime Minister Jacinda Ardern’s announcement on Monday afternoon of an imminent nationwide lockdown.

Rubik’s cubes had sold out, and there had been a strong demand for combined sets of various board games, including chess; some Sudoko books survived the rush.

There was also stronger buyer demand for a wide range of books, including the five-novel series Seven Sisters by Lucinda Riley, an Irish-born author of popular historical fiction.

In a Tuesday evening email to the Otago Daily Times, Mr Brenssell said he had appreciated inquiries from the newspaper for an initial story about an 11th-hour upsurge in demand, in Dunedin and Otago.

He described the situation as being a real threat to business across the country.

"So many good people are going to get hurt from this and not just from the virus," he said.

He was concerned for all businesses whose futures were in question.

He hoped to retain his nine full-time and nine part-time staff, and was applying for a Government business subsidy to help counter the uncertainties ahead.

"You still have to think of everybody around you."

Covid-19 had come on top of other increasing business challenges, including higher costs and growing pressure from technology and internet-related competitors.

Some Dunedin firms were already going out of business, and some tenants were approaching landlords, seeking short-term rent reductions to help businesses survive.

Mr Brenssell came from a West Otago farming background, attended Blue Mountain College in Tapanui, and had spent 20 years farming, including as a high country manager.

That work had taught him the importance of collaboration and common sense throughout seasonal cycles, in good times as well as bad, he said.

In the long term, it was in the interests of landlords to retain good, reliable tenants, even if that meant sharing a bit of the short-term pain by reducing the rent load.

"If you’re a farmer and you see grass, you use it

... You look after your neighbours, and it works both ways."

Asked if he felt cautiously optimistic about the future, he said "I sort of feel neutral about it", given the high level of uncertainty, but was keen to continue, and was working and planning hard to achieve that, and to retain staff.

The Covid-19 situation would not have a quick or an easy ending, he said.

The lockdown was an immediate step "but we’ve still got to find a solution".

He was unsure if the picture would look any brighter after New Zealand had emerged from the global pandemic.

"But the sun is going to come up tomorrow," he said.