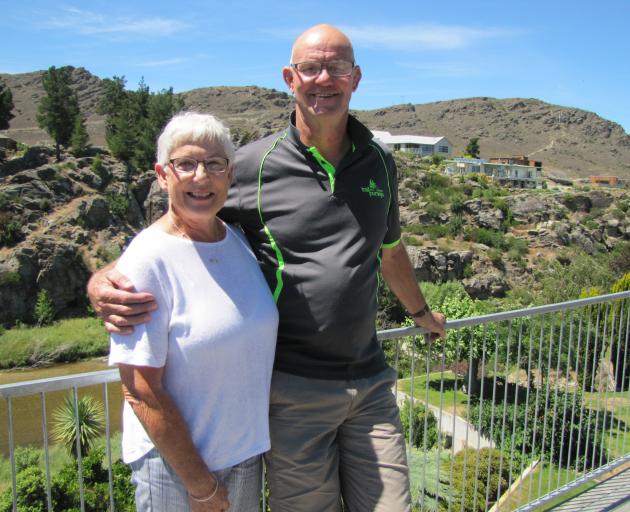 Alexandra couple Neville and Barbara Grubb look forward to semi-retirement following the sale of the majority shareholding in their business, Trail Journeys, to international firm World Expeditions. Mr Grubb says he is confident the principled, sustainable company will take both the business and the Otago Central Rail Trail to new heights. Photo: Pam Jones
A business that has transported thousands of cyclists over the Otago Central Rail Trail has notched up another milestone in its own journey. Pam Jones talks to Neville and Barbara Grubb about the beginnings of Trail Journeys and where the business will travel to next.

In the early days of the Otago Central Rail Trail it was not only the businesses and operators along the trail that were working things out from scratch, one of the biggest operators on the trail says.

''Those very first cyclists, they were the real pioneers of the trail,'' Trail Journeys co-founder Neville Grubb said. ''They were just great. They didn't mind what was there and they didn't mind where they stayed. All they wanted was somewhere to rest their head at the end of the day.''

The old pub accommodation and limited menus those first cyclists encountered have given way to a sophisticated range of options and businesses along the trail and an international reputation. Now, the estimated 12,000 cyclists who travel the 152km trail each year can sample boutique accommodation and award-winning cuisine if they choose.

Mr Grubb believes it amounts to ''the best trail in New Zealand for sure'', with the highest quality infrastructure, activities, services and operators.

''We set the benchmark and we've maintained it.''

Now the firm that many associate with the trail, occupying the landmark former railways goods shed at the Clyde end of the trail, is entering a new era, following the sale of its majority shareholding.

Trail Journeys has just sold 51% of its shares to Australia-based World Expeditions, owned by Nick Kostas and managed by Sue Badyari.

Mr Grubb was previously the majority shareholder. Shayne and Camille O'Connor were additional shareholders and Hugh McIntyre a minor shareholder.

Fifty-one percent of the group's total shares have been sold, and in two years the remainder of the shares will also be bought by World Expeditions. Mr Grubb will stay on as a consultant to Trail Journeys during those two years.

The sale price and Trail Journeys' turnover figures are not being released publicly, but Mr Grubb says the move signals a new era for the business he believes will reap significant benefits for the Otago Central Rail Trail.

The change came from Mr Grubb ''looking at succession'' and wanting to retire. The O'Connors, his daughter and son-in-law, were focusing on other business interests, rather than wanting to reinvest in Trail Journeys and so Mr Grubb started thinking about other options.

World Expeditions was a sustainable and ethical business with an ethos that ''tied in quite nicely with us [Trail Journeys]'', and the synergies between the two companies were similar, Mr Grubb said.

''They're into the environment and they're into looking after people. They're very astute, and it's [World Expeditions] not all about the money. That's what really impressed us about them.''

World Expeditions, established more than 40 years ago, describes itself as ''leaders in responsible adventure travel''. Its website says it offers ''unique adventure holidays on the paths less travelled'' and ''big adventures with a small footprint''.

Those ''adventures'' offer ventures into all seven continents, including countries such as Nepal, Botswana, Mexico, Jordan, Iceland, Oman, the sub-Antarctic islands and the Canadian Arctic.

The company also has a charitable arm, its World Expeditions Foundation raising donations for education oriented projects in underprivileged communities across the globe.

''Their ability through their marketing is going to bring a lot of extra people through our company into Central. You can imagine having that sort of grunt behind Trail Journeys. It should see us [Central Otago and Trail Journeys] well into the future.''

This would be positive for the entire trail network, bringing flow-on benefits to other trail companies and the wider Central Otago economy, Mr Grubb said.

The sale and development was one of which to be proud, considering the humble beginnings of Trail Journeys, he said.

In the 1980s, Mr Grubb owned a business in Alexandra selling mowers, chainsaws and bicycles, and fellow Alexandra man Ritchie Bailey operated a bike hire business from the shop.

Later the pair started a kayak business, called ''Kayak & Outdoor'', situated upstairs from the chainsaws and mower business. They then started ''hiring a few bikes'' through that business. Meanwhile, the downstairs business eventually became almost entirely a bike shop.

The pair also founded the Goldrush multisport event, in 1997.

But when the Otago Central Rail Trail opened in 2000, the hiring side of the business took off.

Mr Grubb sold the bike shop in 2000, to concentrate on the kayak and hire business in a container behind the shop.

In 2003, the pair renamed the business ''Trail Journeys'', and the following year they relocated to the Clyde end of the rail trail. Mr Bailey sold his part of the business to Mr Grubb in 2008.

Trail Journeys is now almost synonymous with the rail trail, although it has been joined by other bike hire businesses along the trail.

The sophistication of those businesses was a far cry from the early days, when tourism in Central Otago was ''pretty much non-existent'', Mr Grubb said. The rail trail ''changed all that'', and he praised those who established the trail for their vision and tenacity, when many were sceptical of the idea at the time.

''I guess what the rail trail did, it made us [Central Otago] a destination for tourists, and in doing that it created a tourism industry that's not just the rail trail, but other things to do in Central Otago. The rail trail really was the catalyst for people to come here - for them to not just go to Queenstown, and maybe catch up with Central at some stage, but to only come to Central Otago.''

Mr Grubb said he was proud of the evolution of Trail Journeys, from the early days when operators were ''as green as grass'' and sometimes flying ''by the seat of our pants'', to a company marketing in an international environment.

He hoped the involvement of World Expeditions would increase numbers annually to that previous record and said indications already were of extra visitors this summer.

Mr Grubb and his wife Barbara still cycle many trails themselves, both in New Zealand and overseas.

He paid tribute to his wife, who had been an ''integral'' part of the business all along.

Mrs Grubb said she was proud to have seen the business go ''from strength to strength''.

There was some ''sadness'' about the coming end of their involvement with Trail Journeys, but they had ''no regrets or concerns'' and were looking forward to enjoying their retirement.