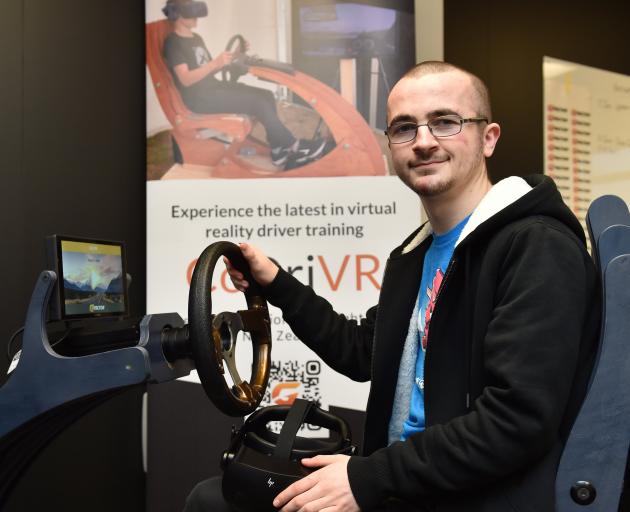 Now in its 13th year, the programme is launching for the 2022 season, inviting businesses to access grants and recruitment support while tapping into the city’s pool of student and graduate interns.

Since its inception, the programme has placed 450 interns, creating 266 jobs, 135 of which were new positions.

Mr Davidson was studying towards a degree in information technology at Otago Polytechnic when he was offered an internship at Gfactor Technologies.

The company was founded by Rhys Gardner who, with his team, has been developing a high-tech driving simulator to create a virtual reality driving experience.

The educational driving simulation game CoDriVR created a three-dimensional experience of driving on "actual" local roads, with the traffic and distractions encountered there.

When he was studying, Mr Davidson’s dream was to get into game development. He worked on some gaming projects in his last year and also did some additional work in artificial intelligence and data science, in which he was also interested.

At Gfactor, he was offered a data science role and, at the moment, he was more of a game developer, so he had ended up exactly where he wanted to be, he said.

Mr Davidson said he would definitely recommend other students applied for an internship, both for the work experience and the potential for a full-time job.

He was thrilled to be offered a full-time job at the end of his internship, although it "wasn’t set in stone".

The transition from studying to having a role that would affect a business was quite different, but the work environment at Gfactor was welcoming, friendly and reassuring. It helped him build his confidence for a real job.

Dunedin born and bred, Mr Davidson was "stoked" he did not have to shift away from the city for work and he intended staying at Gfactor, watching the business grow, helping it, and seeing where it ended up.

It was a "really cool feeling" seeing a project take shape, the changes in the pipeline and all the opportunities. "I think what we’re doing here is really cool and important," he said.

Through getting CoDriVR into schools, it was having an impact and keeping people safe, he said.

Mr Gardner said JobDUN was a good pathway, allowing businesses to see future talent at early stages "and let them get stuck in".

Gfactor had also hired interns before him.

It was focused on CoDriVR which was being used in three secondary schools in Mid and South Canterbury.

Another nine schools would be added in the next months. The team was building content to roll out more widely.

There were six at the business and, as soon as it secured funding, it would hopefully double or triple staff, Mr Gardner said.

So far, Gfactor had been fortunate to attract "amazing people". He believed that "just doing stuff that matters" was an attraction to apply for a job, or to ask whether there were opportunities.

"In Dunedin we’re fortunate to have a pipeline of incredibly able students looking for opportunities to apply their knowledge.

"JobDUN is effectively building the capacity of the city’s workforce and fostering the longer-term outcomes of nurturing and retaining talent in Dunedin, which gives us a competitive advantage," he said.

The programme was facilitated by the Dunedin City Council’s Enterprise Dunedin in collaboration with the University of Otago, Otago Polytechnic and Firebrand. Feedback reported from businesses showed a 95% satisfaction rate.

A diverse range of businesses signed up for JobDUN including technology companies, niche manufacturing, creative industries and food businesses.