By Riley Kennedy
0 Comments
Emily Stewart is bananas about bananas.

The 21-year-old loves the fruit so much she came up with a business idea called Zilla Nice Cream, making ice cream from bananas past their use-by dates which would otherwise go to waste.

The semester-long programme was run by Startup Dunedin with the University of Otago’s School of Business and Otago Polytechnic to encourage tertiary students to pitch business ideas.

As well as being the overall winner, Miss Stewart won United Machinists best physical product, along with best pitch and the people’s choice award. 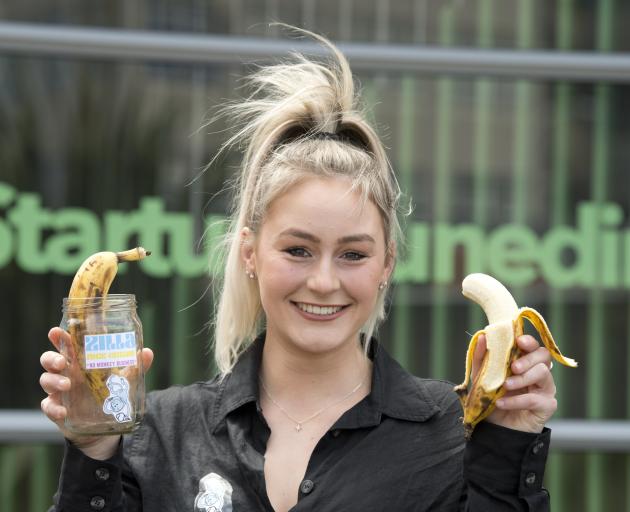 Emily Stewart, of Dunedin, with bananas destined for her ice cream. PHOTO: GERARD O’BRIEN
The bananas, sourced as leftovers from supermarkets, were frozen and then blended to the same consistency as normal ice cream. Flavours, including peanut butter and raspberry white chocolate, were then added.

She spied the opportunity to create the business after she realised ice cream made from a base of bananas was not sold commercially in New Zealand.

Using second-grade bananas helped cut down on the "massive amounts of waste" coming out of the supermarkets, Miss Stewart said.

There was more than 100,000tonnes of food waste each year in New Zealand which cost consumers about $1billion.

"I’d love to help the food wastage crisis because it is getting out of hand," she said.

Miss Stewart admitted studying two degrees and three majors did not leave her much time to work on her business.

"When it is something I’m passionate about like this, you find the time without having to make the time," she said.

Miss Stewart would now seek ways she could launch the business commercially. Steps had to be worked through such as product testing and determining shelf life.

"I’m excited to see where it goes," she said.