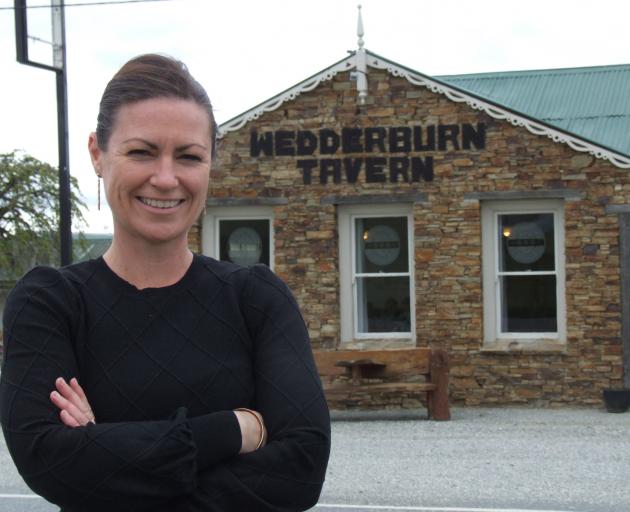 Wedderburn Tavern's new owner Angela Stockdale has finally realised her dream of owning a pub. PHOTO: SALLY RAE
When Angela Stockdale turned 21, a family friend gave her a $100 note and told her to put it towards her first pub.

She might not still have the cash — ‘‘I spent it, I was 21,’’ she said laughing — but she has finally achieved her long-time ambition of owning such an establishment.

Earlier this month, Ms Stockdale officially took over as owner of the schist-clad Wedderburn Tavern, the historic Maniototo pub whose history dates back to 1885. It realised a dream that began when she was 18.

It might seem an unusual purchase for a woman with a background in banking and finance, particularly buying such a business during a global pandemic, but the first-time publican could not be happier.

Born in Invercargill, she grew up on farms in Popotunoa, Mid Canterbury and Waihaorunga, near Waimate. During her last year at secondary school, she worked at the Royal Tavern in Waimate and at other hotels in the Waimate area during holidays and, at university, she also worked at the Captain Cook Tavern in Dunedin.

After completing a commerce degree, in management, Ms Stockdale headed to London, where she worked as an on-site accountant for the Olympic development construction site and White City Mall.

Returning to New Zealand, she later worked as a travel agent and joined BNZ in 2012, working as a business banker. She also completed her master of entrepreneurship while at BNZ.

Her latest role was as a financial adviser for Finance New Zealand, a role which she was able to ‘‘work from anywhere’’ but Central Otago was a drawcard. A keen equestrienne, she loved hunting in the area and the Wedderburn Tavern was a base for the Central Otago Hunt Club.

Ms Stockdale was unfazed about the impact of Covid-19 on hospitality businesses, saying people were ‘‘itching to get out’’ when ‘‘we come out the other side’’.

In the meantime, record numbers of cyclists were using the Otago Central Rail Trail as the rise of e-bikes had brought in different generations, as well as making it easier for families. Until international tourists returned, there were still plenty of domestic visitors to the area.

Living in a small community did not bother her, as she had grown up in reasonably remote areas and, the great thing about such communities was they were ‘‘really supportive because everybody has to help everybody’’.

Telling the stories of the tavern was something that Ms Stockdale believed was important and, for her, it was about discovering those stories and the rich history of the tavern.

Already, she had learned it was, in days gone by, ‘‘the pub you went to when you got thrown out of all the other pubs in the district’’.

Ms Stockdale had extensive plans for the property, including both indoors and outdoors refurbishment, including creating a grassed area behind the tavern alongside a purpose-built curling pond which last froze over in 2013.

She reckoned there was ‘‘way too much to do’’ to get bored in the rural countryside.