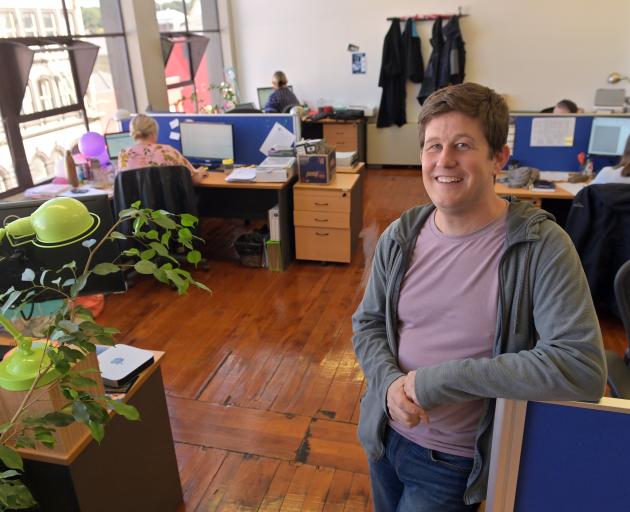 Jason Lindsey at Petridish. PHOTO: LINDA ROBERTSON
"There's a bit of humour in the fact that we definitely don’t want to be a company named Petridish that has an outbreak."

A cleaning regime, contact tracing and rules concerning gatherings are all in place at Jason Lindsey’s co-working offices, Petridish, as the organisation takes the toll of Covid-19 and its impact.

That included the departure of cafe and bar Ombrellitos from the ground floor of the Stafford St building and the cancelling of about $28,000 worth of events — within about three days of lockdown.

"We spent about half a million bucks on that event space," Mr Lindsey said. "That’s where we’ve taken the most immediate hit."

Just a few weeks before lockdown, Mr Lindsey remembered commenting to partner and Petridish co-founder Kate Lindsey about how the events space was "chock-a-block booked".

But, after about seven of their tenants left in the early days of the Alert Level 4 lockdown, they slowly started to come back.

"Of those seven ... four of them have already come back and two of them were closing their businesses so they won’t be back necessarily any time soon."

And the Lindseys will fill the space Ombrellitos left.

"Kate and I being ... probably a very fine line between brave and stupid, we’ve decided to open a cafe ourselves, which will open in July."

While some have been touting the benefits of working from home during the lockdown, Mr Lindsey does not believe it is a viable long-term option for most.

"I’m in a whole building full of people who have worked from home before and there’s a reason why they’re here.

"A lot of people, whether they’ve realised it in the short term or not, will realise working from home has some advantages, but for a lot of people there’s way too many negatives that outweigh those advantages."

The biggest negative was the isolation people felt at home, he said.

Petridish had a boost in new membership and inquiries in the last week.

Over at one of Dunedin’s other shared working offices, Innov8HQ, founder Heidi Renata described the Covid-19 impact as "a shock to the system".

"The forced pause clearly has thrown us all.

"For us co-working is naturally curated to the shift in the workforce — having that ability to be flexible with working and [the] working environment."

With the changes to the way people have been working in lockdown and Alert Level 3 she was confident co-working spaces were a "viable solution to the new normal".

They had some businesses that had "lost trade for now," she said.

There were "Aroha packages" to help those at the co-working space who had been hit hardest , including a travel agent.

"Clearly they’ve really struggled through it so we’re supporting them through the next 12 months.

"We’ve got single-owner enterprises as well — they’ll have businesses as a ‘side-hustle’ for lack of a better phrase and then they’ll have jobs external to that as well. There’s redundancies coming through so for us ... [our] focus is to take care of them."

Innov8HQ had online booking systems already — so contact tracing was not a problem and their spacious offices meant social distancing was easy to manage, Ms Renata said.