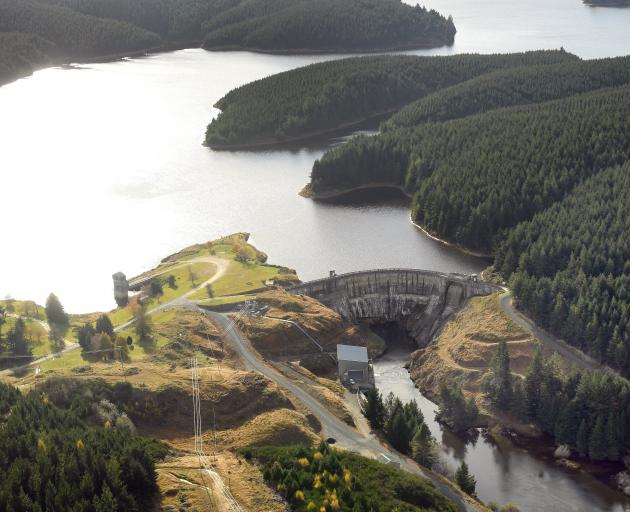 Waipori Dam, Otago, one of Trustpower's 44 hydro-electric facilities. Trustpower recently lowered the number two lake level by 2.1m as a precautionary measure in case of an earthquake.PHOTO: STEPHEN JAQUIERY
Electricity generator and retailer Trustpower has had operating earnings cut by 17% to $107million for the first half of its financial year on the back of plant outages and lower inflows.

Generation volumes were down by 177 gigawatt hours (GWh), or 15%, on the corresponding period last year, which the country's fifth largest electricity generator said was due to the "variable nature of hydro power generation".

Wholesale prices were materially above the comparative period last year and remain above long-run averages, the company said.

The company, which has invested in a "bundle strategy" across its retail and generation and divisions, said it had also topped 100,000 telco customers last month in its retail offering, total retail utility accounts reaching 406,000 - up 7000 on the same time last year.

It said customers across two or more products rose almost 9% to 111,000, helping lift retail revenues to above $500million.

Trustpower chief executive Vince Hawksworth said the result was affected heavily by reduced generation volumes and costs associated with a three-month unplanned outage at Canterbury's Highbank Power Station, which he described as the "worst single machine point of failure" across the generation fleet.

The outage represented a 43GWh loss during the period, about 2% of the company's overall output across its 44 hydro power stations, which includes the Waipori Power scheme, a network of four power stations 50km southwest of Dunedin.

He said asset enhancements continued to be a key strategic priority for Trustpower to help fill the expected long-term New Zealand energy gap, with a generation enhancement programme over the next five years.

He said while the retail environment remained competitive despite prolonged heightened wholesale electricity pricing, "our strategy continues to resonate with customers, and new offerings will continue the positive trajectory."

Mr Hawksworth said the focus and investment in customer-centric service offerings is paying dividends, with more than 72% of all customer contacts handled via digital channels this year, and about 80,000 customers now utilising new functionality on the Trustpower smartphone app.

The company was maintaining its guidance of earnings in the $200million-$215million range for the full financial year.

Well bully for them, their prices are too high anyway.