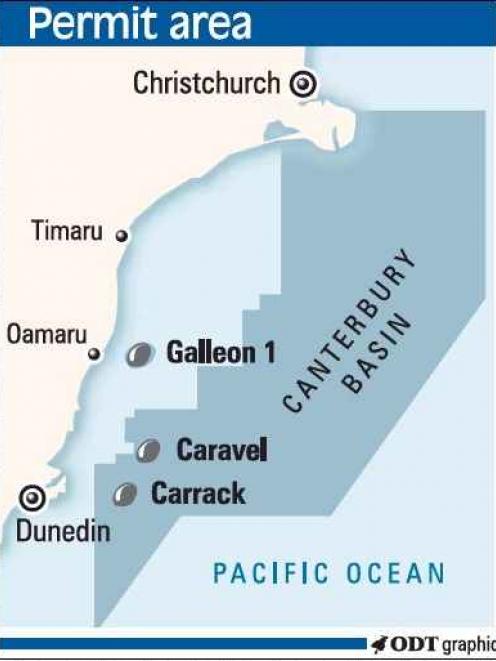 United States-based giant Anadarko Petroleum Corporation is to contribute $US30 million ($NZ43.1 million) towards exploration of oil and gas prospects about 65km off the coast of Dunedin - with the possibility of a deep-water oil rig arriving next year.

Origin completed a hydrographic seismic survey of the Carrack and Caravel prospects in 2009, covering about 300sq km within the southern point of the Canterbury Basin.

Anadarko had since paid for specialist processing of the seismic survey material, Origin's executive general manager for geo-science and exploration new ventures Dr Rob Willink said in a statement yesterday.

"The joint venture [through New Zealand subsidiaries of Origin and Anadarko] will now move forward to secure a suitable rig for the drilling of an exploration well, most likely in 2011," Dr Willink said.

The prospects might hold more than 500 million barrels of oil (and gas) equivalents, he said.

He said a one-hole deep-water drilling programme was likely to cost between $US75 million and $US100 million, with costs beyond Anadarko's $US30 million contribution shared among the joint-venture partners.

Anadarko Petroleum Corporation, listed on the New York stock exchange with a market capitalisation of $US36 billion, is one of the largest independent oil and natural gas exploration and production companies in the world.

It is the largest independent deep-water producer in the Gulf of Mexico, and has production or exploration activities under way in Alaska, Algeria, Brazil, China, Indonesia, Mozambique and West Africa, having last year reported record sales of 220 million barrels of oil (and gas equivalents).

The Ocean Patriot rig capped and abandoned a test well 21km off the North Otago coast when it was deemed to be commercially unviable.

The adjacent Galleon oil and gas prospect was drilled in 1985 by BP Shell Todd, but capped because it was economically unviable.

Mr Pfahlert said the deep-water test-drilling rig used for the Origin programme could potentially be co-contracted by permit holders in the Great South Basin.

Both consortiums have gathered seismic data since gaining the permits in July 2007.

Exxon has until October to decide to test drill, or drop its permit, while OMV has until January next year to make its decision.

Dr Willink said Origin was keen to share rig mobilisation and demobilisation costs with other operators wanting to drill in the vicinity.

Crown Minerals has spent about $7 million gathering southern seismic data and is expected to spend another $3 million in the region this year.