Year of highs and lows for distillery

Saskia and Andrew outside their distillery in what used to be the old Morrisons Garage. PHOTO: SUPPLIED
After a busy first year in business, Geraldine’s Humdinger gin distillery has more changes ahead.

The self-confessed “risk adverse” couple went through lockdowns, the birth of their first child, along with one-in-100 year flooding while developing two award-winning gins.

They had lots of things in motion when Covid-19 hit, Mr Lewis said.

“We already had our still being custom built, we had a lease agreement in place and I’d done lots of the design so we backed ourselves with our skills and took calculated risks which have got us to where we are.”

Now that they had proven their product, they had purchased a 30-year-old German copper still with four times the capacity of their existing still, he said.

He acknowledged that they were taking some risks.

“But we’re just not being silly with any of the risks or decisions we’re making.

“While other more risk-tolerant people would go big right away.” 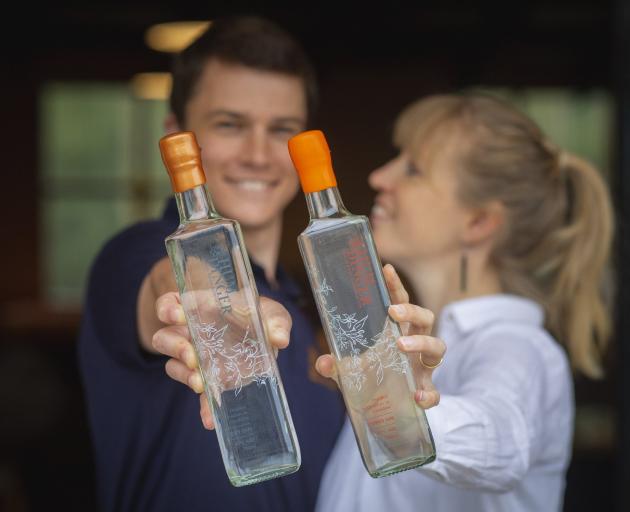 Andrew and Saskia Lewis with their previous bottle, a new one will be unveiled shortly but the product will still be the same. PHOTO: SUPPLIED
The distillery backs on to the Waihi River, in what used to be the old Morrison’s Garage.

The flooding at the end of May was a close call for the premises, Mr Lewis said.

“We were very fortunate that the flooding only cost us sweat and a couple of days’ downtime.”

The night prior to the flooding they sandbagged the front of the distillery as they did not want damage from a big downpour overwhelming the stormwater system, he said.

But in the morning Civil Defence rang and said the rear of the distillery was at risk from the river.

“We were lucky that Saskia’s parents were staying, so we all rushed down to the distillery and loaded all of the vehicles with our stock.”

They loaded everything that would take a long time to replace, such as the botanicals the pair had specially imported from the UK, “and anything else that would fit”.

“We can’t really move the still much so we had to lift that up on to pallets and hoped for the best. Luckily no harm was done, so when the river subsided we put everything back.”

Now, they had a sticker press about to arrive, and were planning to change their bottles and trying to fit a huge new “press” into the premises.

“Both gins medalled at all three competitions with the order entered IWSC, London, New Zealand which shows we are continuously improving,” Mr Lewis said.

“We have some really good feedback to incorporate into a new gin we’re currently playing with.”