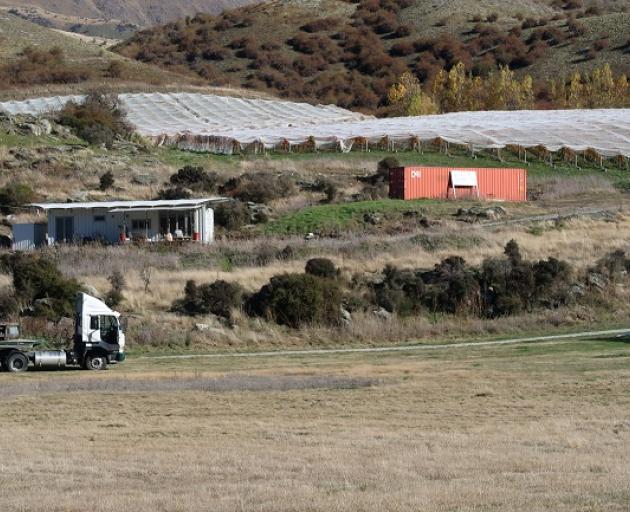 Gareth Noble has had the structures, highly visible from the highway, on his Wentworth Estate land for 18 months.

Under the subdivision’s covenants and the council’s district plan, containers are only allowed if they’re ancillary to a building project.

To date, the only apparent building activity’s been a recently-laid floor slab which a house is due to be built on.

Wentworth Estate owner Terry Stevens says he and nine other neighbours started to take court action against Noble last November, but their lawyer advised them to instead ask the council to enforce its own planning rules against temporary buildings.

He believes that’s because other council staff were helping out a colleague.

"In other words, they’re holding his hand and working very closely with him."

Stevens says the containers wouldn’t be such a big deal if they were tucked away, "but this a major eyesore for the whole subdivision".

Near neighbour Kim Carpenter says he’d been told council wanted to enforce its planning rules, "and they haven’t, and whether that has to do with Gareth being an employee or not, it certainly looks poor".

Asked for comment, Noble says: "This is a private matter.

"I will not be making any comment at this time."

But council boss Mike Theelen is adamant his staff member’s not been treated any differently than any member of the public.

"The approach we’ve taken here, and that’s the approach that we take 99 per cent of the time, is we endeavour to solve those sorts of illegalities, if that’s the right word, by trying to encourage people to get themselves into compliance, and clearly this is what’s happened with Gareth."

Asked about the wording, Theelen says "adding all that at the beginning of his application is unnecessary".

What about the eyesore of all that white net behind the containers?