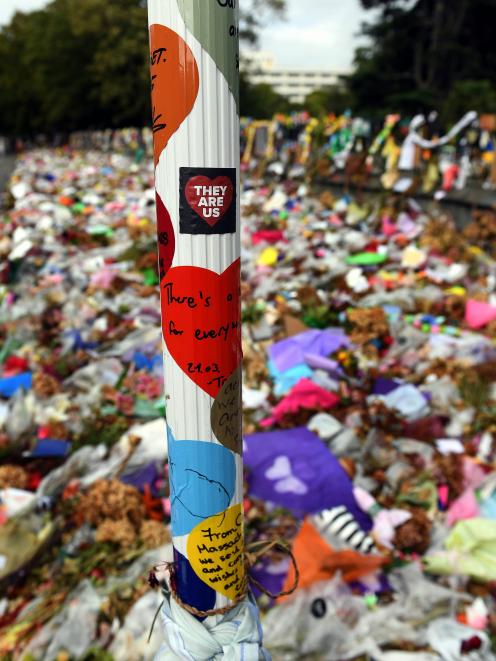 We have been tip-toeing around a strange, unsettling event that challenges our identity as a nation. It's not about rugby. It is more fundamental than that.

This is actually a compliment to our media who have agreed to the compact. Their voluntary restraint is actually an affirmation about who we are as a society.

Earlier this year an intruder killed many of our people and wounded many others. He wanted to spread a nasty message, a message of hate and intolerance. He lacked any real understanding about what has created successful societies throughout history.

Traditional media are under huge commercial pressure to attract public attention, regardless of ethics these days. But allowing someone to falsely cry ''fire'' in a crowded cinema would be gross.

This sad unsettling event may actually help define us as a society. What makes our country unique? It's not the All Blacks, despite their proud tradition. It must be tolerance and acceptance of difference. We are a very young society. The impact of immigration in recent decades has been huge.

We were one of the last landmasses on this planet to be permanently settled by humans. We are a nation of migrants. We must respect the Maori as the Tangata Whenua. Recent migrants are part of this process.

This state of flux demands us to confront what we mean by ''national identity''. All of us should know our own national history, because it is an interesting and relevant story. But most importantly, it is crucial to understanding ourselves.

Arguably, the most successful young nation in the past few centuries has been the United States. It has been an amazing historical experiment, warts and all. It's a far from a perfect story. But it shows what can be achieved by a nation that embraced migrants, diversity and eventually freedom. It feeds creativity, enterprise and prosperity. But it also creates tensions.

Those who deny this reality have a big problem. Those who believe in the concept of racial purity lack any credible historical evidence to support their arguments. Diversity and openness can create strength and innovation and enterprise. Economic history teaches this over and over. Countries that adopted the opposite have declined and decayed. Spain under the Hapsbergs, China and Japan from the 15th century and North Korea in the modern era. Isolation and rigidity of thinking invites stagnation and retardation.

Those who suggest their race or religion or creed is inherently superior lack any appreciation of history or Darwinian evolution. If there was such a superior human genetic type, evolution would suggest a convergence rather than the obvious diversity among humans.

Migrants are an easy target in difficult times. They are usually younger, sometimes better educated and often more motivated than many locals. This can fuel resentment.

I am proud of how our media has maintained their compact to ignore this guy and his deluded vicious message. They have not provided a further platform for him.

He was not one of us. His message is not about who we are as a nation. But his grotesque crime could be used to help define us as a nation.

New Zealand was first settled in the 12th Century.

"Arguably, the most successful young nation in the past few centuries has been the United States. It has been an amazing historical experiment, warts and all. It's a far from a perfect story. But it shows what can be achieved by a nation that embraced migrants, diversity and eventually freedom. It feeds creativity, enterprise and prosperity. But it also creates tensions."
This is true up to a point and that point is clear to see if you travel the US now days. As we all know, there is a major push to make America the great culture it once was.
While there is no sustainable argument regarding racial diversity, there most definitely is regarding cultural diversity.
Trust is what holds societies together and it is that trust, which is lost when divergent cultures exist in the same space.
We are much better served when immigrants assimilate into the established culture of the country they have adopted, presumably because they see it as being such a big improvement from where they have come from, that they are willing to bear the major disruption of leaving the culture they were raised in, ultimately, for the benefit of their children.

Interesting read. As a recent immigrant I have a different perspective. New Zealand is a Racist Country. A very racist country. Many of you reading my comment thought to yourself: “If you don’t like it here then go home”. Admit it, you know it’s true! Like most immigrants, I hear that a lot especially if I engage in political debate that’s unpopular. The fact that many New Zealanders say things like that and even more think things like that don’t support the argument that Kiwis embrace tolerance, openness, and diversity. It's rubbish! Migrants are an easy target in difficult times? Mate, we are easy targets all the time! Try being a highly educated emigrant looking for a job in a country that embraces nepotism. Most advertised jobs are already filled internally or slated for a New Zealander. Yes New Zealand embraces migrants but only to fill the jobs Kiwis don' do. How many non-white migrants are executives in Fonterra? Or work in senior positions in government? The big problem is people like Mr Lyons want to feel good about themselves by writing dribble like this. Mr Lyons thinks because he throws a “crumb” to a migrant that he is virtuous and embraces diversity. Wrong mate!

An interesting view point and one I've heard several of liberal political types expound.
"New Zealand is a Racist Country" What do you mean. Is it our government systems. Is it aimed at the population at large. Is it all other 'races' within the country that discriminate against your 'race'. Are you finding it harder living in our society than the one you left or are your expectations of what you would get, just by being here, not being meet.
"go home... I hear that a lot.... in political debate that’s unpopular.... don’t support the argument that Kiwis embrace tolerance, openness, and diversity" So when in political debate with 'kiwis', when you find you're agreements are not readily accepted and THAT proves that they are intolerant, close-minded and against diversity of race. Could there be no other reason.
"a country that embraces nepotism... jobs are already filled internally... " I agree. This is a problem. Many positions are only advertised for the sake of appearances, often filled in the name of diversity of gender and race, rather than ability. These are liberal policies, you then go on to promote.
Education does not equal ability, neither does gender or race.

I think your comments validate the points the previous writer is trying to make. For example, you state: "Are you finding it harder living in our society than the one you left". This woman is a member of "our society" yet you intentionally use verbiage excluding her. You use the phrase "Our Society" several times in your rebuttal intentionally excluding this women as a member of the New Zealand society as a whole. Why? I don't know you so I wont accuse you of racism but it makes me wonder. Like she said these are not words individuals who embrace tolerance, openness, and diversity use because you are intentionally excluding her. Again, you validate the writers comments by arguing that ""go home... I hear that a lot" isn't racist. Under what conditions would that be acceptable? In most peoples book, anybody who makes a statement like that unequivocally proves that they are intolerant, close-minded and against diversity of race. These are racist arguments. You are correct with your closing statement: "Education does not equal ability, neither does gender or race". Unfortunately, I think the point the writer was trying to make was education negates racism, a point obviously missed.

Why do you use the phrase "our society"? I thought when I emigrated here I became a member of "our society". Your comments clearly show that I am excluded. Why do Kiwis exclude migrants? What do I need to do for entry into "our society". Why do you use the phrase "Are you finding it harder living in our society"? I never said I was having difficulties living here. I work hard and have a good job. But in a racist country like New Zealand, a migrant can go only so far. Ever wonder why so many migrants go into business for themselves? Why they stay in their own communities? Is it racist to automatically stereotype migrants as having difficulties living here? I guess the real point I'm trying to make is this: Who gets to decide what is racist? And what is the criteria? Mr Lyons wrote a glowing article about how great race relations are in New Zealand. I assume Mr. Lyons is a member of "our society" and espouses their perception of life in New Zealand. Thats not the same view migrants living outside of "our society" hold! I say again, New Zealand is a Racist Country. A very racist country!

Not sure about all that. Diversity means divide. Atomize. Separate. A country divided is more easily conquered. Economically conquered. We are largely a Christian nation. Some might not like that, and be trying to change that, but there it is. There was an idea, worth looking at, that all people are created equal, with divine potential. Diversity is sometimes a good hedge for your investment portfolio if percents and rates of returns are what makes you tick. The pursuit of mammon is the root of all evil.