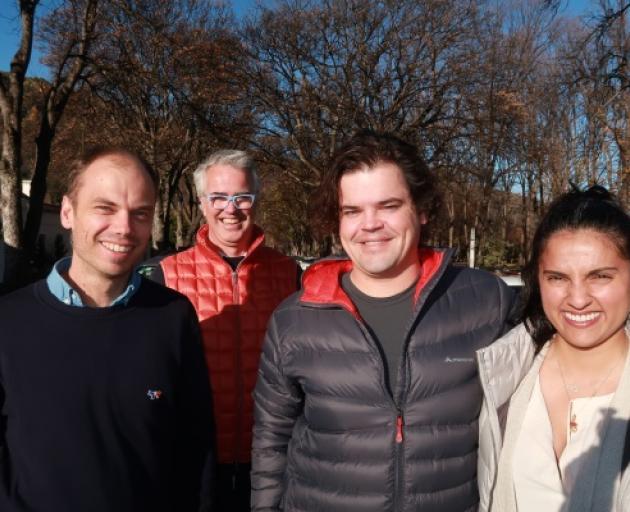 Cutting-edge entrepreneurs: From left, GuestHQ's Richard McLeod and 'presence' tech experts Simon Small, John Stockdale and Priya Samra in Arrowtown this week.
The same week the government’s introduced a Covid-19 digital diary, “world-first” contact tracing technology is about to be rolled out in Arrowtown.

Three Queenstown software entrepreneurs are behind tech startup ‘presence’, which detects when someone’s close to any premises, and issues a notification onto their phone.

For hospo venues, presense then passes the notification onto a venue check-in service like GuestHQ.

GuestHQ, developed by local hospo operators Richard McLeod and James Arnott, has already been used for more than 750,000 check-ins in New Zealand, and is gaining global recognition.

Contact tracing apps are being developed worldwide to trace people’s movements in the event they, or someone they’ve been with, tests positive for Covid-19.

Arrowtown’s being used as a technology proving town for both presense and GuestHQ.

“We want Arrowtown to be leading the nation and ideally leading the world in technology that’s accessible.

“We’re trying to build the iPod of contact tracing.

“IPod was not a new technology when it came out.

“But, in the same way, we’re taking the best of all these worlds and trying to make it seamless and transparent for people as they go about their business.

“Even the ones that are government-mandated are not seamless, and they’re not very efficient.”

Samra says: “Everywhere around the world we have scoured for a solution that would enable seamless guest registration as well as public safety information, and there was just nothing out there, so we thought, ‘why not build it ourselves?'”

Small adds: “We think Arrowtown is a great place to pilot this work with GuestHQ and presense.

“If we can get a high concentration of people and establishments using the same technology solution pushed to their mobile phones, it will mean locals and visitors will be better placed to get through this phase.”

“Our goal would be for presense and GuestHQ to connect with government technology solutions.”

"Those who would give up essential liberty to purchase a little temporary safety, deserve neither liberty nor safety." Ben F

Who wants a Stasi app in their pocket?