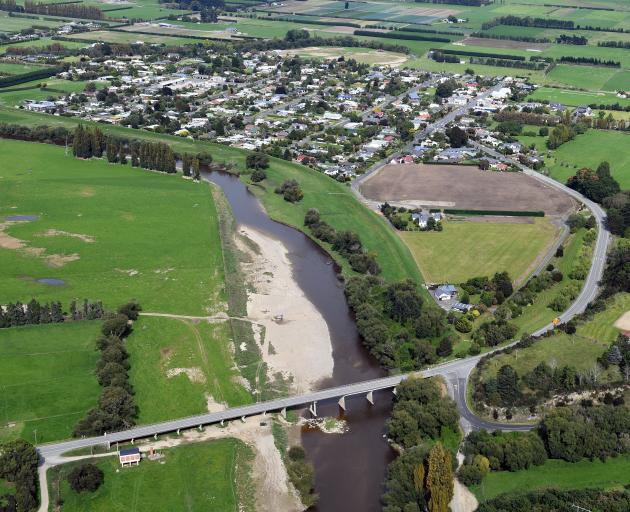 Outram from the air. Photo: Stephen Jaquiery
Traffic in an Outram street has the potential to become like a "washing machine".

At the latest Mosgiel-Taieri Community Board meeting Outram resident Sue Broad shared her concerns about the heavy traffic flow in Formby St.

The street, which runs between Huntly Rd and Holyhead St, was used by large trucks as a shortcut through the township, and was the entry and exit point to a new subdivision, Maungatua View, she said.

Outram School was also at the corner of Formby and Beaumaris Sts.

The "biggest problem" was the heavy through-traffic using the street as a shortcut from Huntly Rd to State Highway 87.

On the day of the meeting she counted six trucks, including a truck with a "huge load of gravel" and two cattle trucks, going through.

"Now, as I understand it, this is a local road and I think that heavy through-traffic is totally inappropriate in this area."

She thought Hoylake St was a more suitable road for the trucks.

"I think we need to move quite fast on this issue ... because it will not be long before there are multiple families living in Maungatua View and they will all need safe access to the school."

Later, Mrs Broad said the combination of traffic could create a "washing machine effect" outside the school.

Board deputy chairman Dean McAlwee said Mrs Broad was on the right track and changes to the school zone were expected "shortly".

"All your concerns are in the pipeline," Mr McAlwee said.

In response to questions by The Star, Dunedin City Council transport strategy manager Nick Sargent said the council was working on a project to make schools in Outram and Mosgiel safer.

Council staff were working with the community board and schools, Mr Sargent said.

"Trials are likely to be implemented this coming summer and the community will have the opportunity to provide feedback before work is made permanent."

Don't forget about the roundabout for the trucks to drive over because it's not big enough for them to turn around it ...

... and please, don't forget about the bollards and pretty colours painted on the road ...