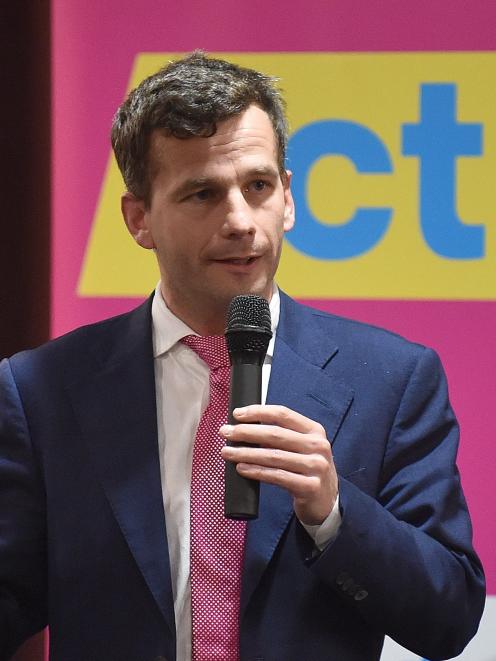 Act New Zealand leader David Seymour. PHOTO: GREGOR RICHARDSON
While last weekend’s election might have been a triumph for Labour and a success for the Greens, Act was also buoyed by its remarkable comeback.

Act seemed destined to disappear not so long ago. It only won the Epsom seat for the past nine years, and that required cups of tea and help from National.

Its rating was only about a miserly 1% even early this year. Compare that to its tally, subject to special votes, of 7.6% (10 MPs) this election. Three years ago that was just 0.5%.

Younger voters will not remember Act’s earlier glory days. Act (the Association of Consumers and Taxpayers) was founded in 1993 by Roger Douglas and Derek Quigley, and became a political party the following year. It won seven list MP places in the 1996 election and nine in the next two.

Act then lost its way and was down to two MPs in 2005, recovering to a respectable five in 2008, where it supported the National government along with United Future and the Maori Party.

John Banks was its only MP from 2011 to 2014, followed by David Seymour for the past six years.

Under Rodney Hide, it made a name as the perk-buster, but it then become hardline on law and order and some social issues. It drifted from its libertarian outlook.

The irrepressible Mr Seymour this year has danced through politics with a sure step. His advocacy of the End of Life Choice Act and his success guiding the law through Parliament was skilled. On the Covid Epidemic Response Committee, he made a name for asking pertinent questions. He stood alone against the tightened gun laws following last year’s mosque murders, and he spoke up for free speech.

Mr Seymour is likeable and unencumbered by the complexities of National or the demands of actually having to govern. But, while it has been less difficult to articulate clearer policies and ideology and he does not have to appeal to a broad church, he still had to make the play and grasp the headlines.

His band in Parliament has to follow the same path. They will scrutinise spending, attack encroachments on individual rights and argue for choice and smaller government.

Both United Future and New Zealand First have suffered when a large group of inexperienced MPs came to Wellington. But while Act’s line-up looks reasonable on paper, Parliament is a cruel and testing place where weaknesses are exposed. Act will be vulnerable if and when any believers in wacky theories spout forth.

National’s ongoing problem was that, even with 40-plus percent of the vote, it lacked allies in Parliament to form a government. Ironically, this time, it has a significant party to its right. But the combined share is dismal.

Some suggest Act is the party of the disgruntled, that its backing will collapse nearly as fast as it soared. It might well have swiped support from New Zealand First and the far Right, but a primary furrow seems to have been from former National voters, especially farmers.

Notable are the big tallies for Act in the southern country booths.

National’s house was in such disarray that Act provided an alternative. Surely, many of those votes will flow back if National can do a half-decent job.

Act largely abandoned its courting of conservative populism, and it has moved from its one-time blatant climate-change denial. Instead, all Act MPs will need to be clear on their basic classic liberal messages about individual rights, economic freedoms and smaller government if it is to maintain a core in Parliament after 2023.

They must act up as a vigorous opposition party in the House with those principles in their sights. But acting up with diversions and divisions will consign Act once again to near oblivion.

"Overwhelming turn out, we see".