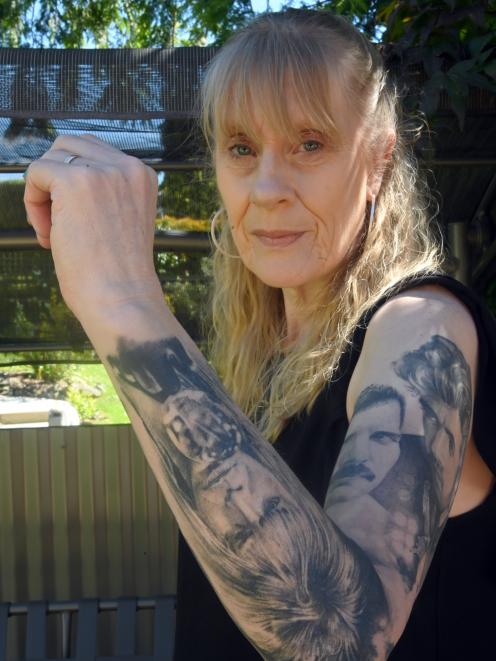 The Fairfield 55-year-old was 51 when she got her first tattoo — an image of British pop star George Michael, on her left arm.

"It was just after he died. I’ve always wanted a tattoo of him, but I was always scared to get it done because I was worried about other people taking the mickey."

When he died, she realised he was now "a legend" and she no longer cared about what other people thought.

She simply told herself, "you gotta have faith", and then got the tattoo done by Veronica Brett at Agency Tattoo.

A year later, she was knocking on the artist’s door again, ready for her next project.

This time she memorialised two of her other favourite singers, Freddie Mercury and David Bowie.

"I’ve been a fan of all three of them for as long as I can remember — since I was a teenager.

"All three were quite extreme, extrovert characters. I admire that."

She said the tattoos attracted a lot of positive attention because they were so recognisable and detailed.

But they were not everybody’s cup of tea.

"I had a guy touch my arm once and he said it was like a cemetery because they’re all dead."

No matter what others thought, the main thing was she has no regrets.

"I never ever thought I would get a tattoo, and then when I got one, I thought, ‘Yeah, I can do this’, and then I just kept going."

Just before Christmas last year, she had an image of her red golden retriever dog Magic, a K9 medical detection dog, tattooed on her right arm.

And she had plans to tattoo images of her three other dogs on her arm.

"They’ve been good friends to me."

Asked if she had plans to have more tattoos done after the dogs, she said, "I don’t know. I’ve got two legs. Who knows".

Well done. Next we need an influx of Aucklanders. January is a dull lacuna. Lacuna!