There is one new community case of Covid-19 in New Zealand today, but the individual is already in the Auckland quarantine facility.

The new case, referred to as Case O, is a household contact of Cases I, J, K and L and has been in quarantine since February 23 as a precaution.

The Ministry of Health believes this means they have been in quarantine for their entire infectious period and there are no new locations of interest or wider risk to the community.

Prime Minister Jacinda Ardern is still urging people to stay home and for anyone with symptoms to immediately get tested.

Ardern and Director-General of Health Dr Ashley Bloomfield held a media conference after the country's alert levels went up this morning.

Speaking this afternoon, Dr Bloomfield said he was confident level 3 was appropriate at this point in time, as long as everyone did what is required at level 3, such as having as little human contact as possible.

Ardern urged people to stay home, and anyone with symptoms to get tested straight away.

"Covid kills people. We must never lose sight of the reasons we take these measures - it is to save our people's lives and our livelihoods."

The prime minister said the number of exposure events was a reason Auckland moved to alert level 3.

She said regular check-ins are being done to make sure those who have been asked to stay at home, are staying at home. She said police will get involved if people are breaching the rules of self-isolating.

Close contacts are in daily telephone contact, and if they can not be contacted, door-to-door visits may be considered.

Ardern asked employers to make sure those who need to be isolating do not come to work. Financial help is available. The wage subsidy is available nationwide through this period.

"Despite our best efforts to date, recent cases have gone to work when they shouldn't have," Ardern said.

Auckland moved back to level 3 this morning, while the rest of the country moved to level 2 following two new Covid-19 community cases that could not be directly linked to earlier cases. 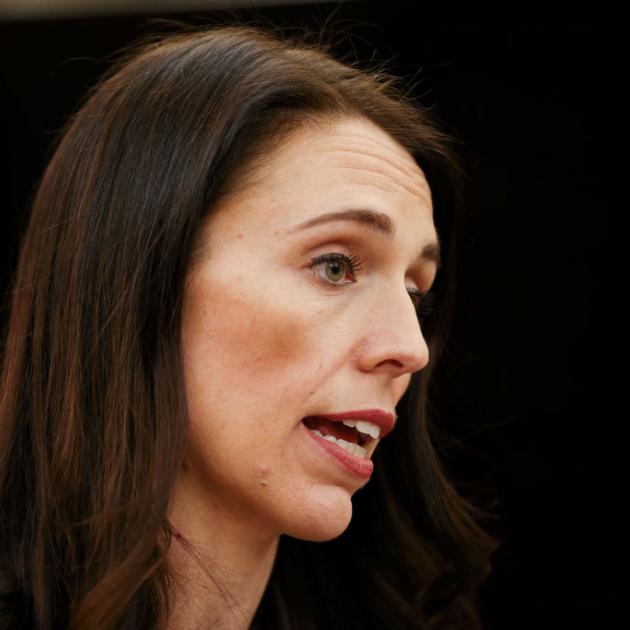 Ardern made the announcement at a briefing at 9pm last night, saying that the alert level changes would come in from 6am today and would be in place for seven days.

This morning the government confirmed genomic sequencing showed the latest community case of Covid-19 in Auckland is linked to the South Auckland cluster.

Bloomfield said the new community case from yesterday was the UK variant.

Contact tracers have identified a link between the two families from the Auckland suburb of Papatoetoe.

All information to data suggests that all the confirmed cases are from one cluster.

This was a positive update, Bloomfield said, as it means there is still only one cluster.

He said there is a "strong" focus on seeing if there are any new cases at Manukau Institute of Technology.

He said at the "very least" people who were there should be at home in isolation.

Bloomfield said the Ministry of Health made a mistake "when working at pace" in terms of the dates around the Manukau Institute of Technology visits.

The correct times have now been updated, he said.

Ardern said this afternoon that New Zealanders will not beat Covid-19 by turning on each other. She said New Zealanders had enjoyed more freedoms than any other country in the OECD.

The prime minister asked that anyone who has symptoms to get tested straight away.
She also said people must stay home after their until they have been given the "all clear".

Others were told to say home.

"If you can work from home, please do."

She said New Zealand has beaten Covid before and "we can do it again". 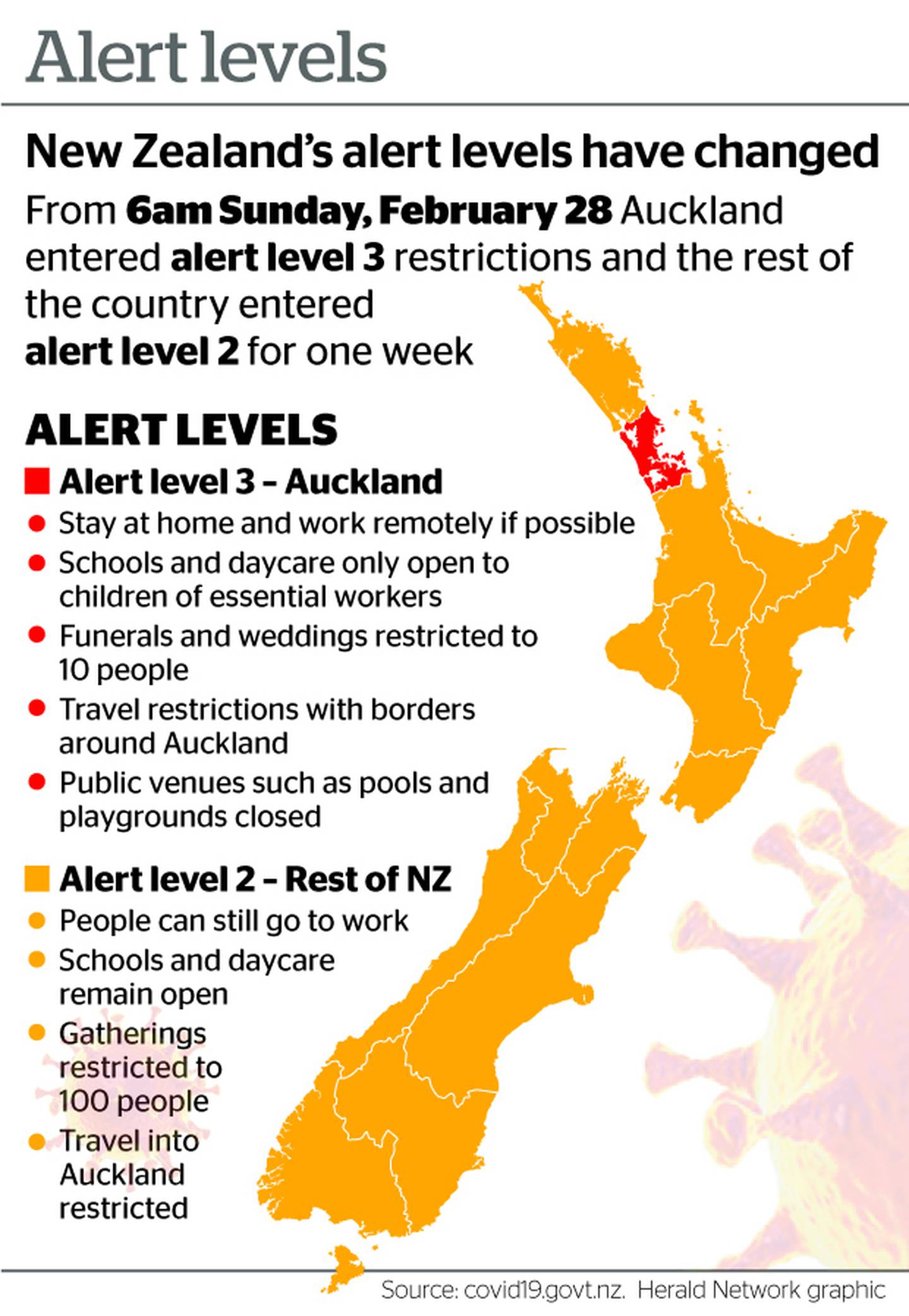 Graphic: NZ Herald
Ardern said there was a possible person-to-person link with the new cases.

"This is good news," she said as it meant a direct picture could be made about how they got the virus.

But she said the potential exposure event over the week was a concern.

Asked if she would consider moving Auckland out of alert level 3 if there continued to be no new cases, Ardern said the UK variant had a "longer tail" that meant there might be more positive tests to come.

Ardern said the advice Cabinet received from the Ministry of Health was for a seven-day lockdown, but all the information was being reviewed on a daily basis.

Bloomfield said officials were seeing "unpredictability" with this variant.

Ardern said she was advised about the case at 3pm yesterday, but had "very little detail" necessary to make a decision. That came around 6pm.

She said it would have been tough to shut events halfway through.

Big events were staged last night across the country, including the Joseph Parker vs Junior Fa fight in Auckland and a Six60 concert in Hamilton.

Ardern acknowledged the "frustration" of Aucklanders, but said "turning on each other" would not help, referring to the community case who broke isolation rules.

"We are nearly there. In the meantime let's stick together," she said. "We've done it before, we can do it again."

She said a "number of events" had been affected by the new alert levels, she was "devastated for the fans", but Covid meant the events had to be cancelled.

But one thing everyone can do is to make sure accurate information is being shared.

She also said the Government won't amplify that message.

And if that message is still being shared, the Government will provide experts to help provide correct information.

How will Govt enforce level 3 rules?

Ardern said she is keeping an eye out for rule-breakers.

The Government is doing check-ins on people who are isolating, the Prime Minister said.

She said if officials have concerns that people are not isolating, they will work with Police to ensure they do stay at home.

On the check-ins, she said the "vast majority" of people have been complying.

But a handful of people haven't been and that has had "dire consequences".

The last time check-ins were deployed by police was during the August outbreak.

Ardern said so far, 75 percent of people who have got Covid vaccines are from South Auckland. These are people who work at the border.

That means, according to Ardern, South Auckland is being vaccinated.

She confirmed that when the general vaccination roll out starts, "South Auckland will be first".

She said it makes sense the vaccination programme to start there, as it's higher risk.

Ardern reminded businesses about the wage subsidy and the short-term absence payment.

She called on managers to talk to their staff and make sure they are not meant to be isolating.

If they have, she said, they need to stay home.

Ardern said staying home will keep everyone safe, and help ensure New Zealand can move back down alert levels.

On the IRD phone lines and website, Ardern said they will be restored on Monday.

The outage was pre-scheduled.

She said it won't change the timeframe on the subsidy scheme.

Jeez. Some people do not understand reality. Stop reading false news and even if you don't want to believe the Govt, listen to the experts

Maybe, but the worst thing IMO would be to kill an innocent person because of your own ignorance. It's not about you!

Our Prime Mistress is making her career based on COVID fear. If the government had acted fast and decisively at the beginning of this we would have kept it out but they didn't. If they had put in effective border controls immediately it would have not been a problem, but they didn't. Now that they have let it in, they seem hell bent on making as much political milage out it as they can. A good government approach would balance the economic, social, entrepreneurial, treatment, research, education, and clinical aspects of the problem. Although hardly anyone has died from the disease in NZ: many of us have lost businesses, houses, our savings, or our last years on the planet with our grandchildren. But I shouldn't complain. These are small costs to advance the career prospects of a lightweight politician.

Some people are a danger to themselves and the majority of NZ.
If you don't like what is happening here, you are welcome to leave. Try the UK or USA. I'm sure there will be plenty of idiots over there who will welcome your insightful views

Why is she now going on about the virus killing people? We know that - oh that's right, scare tactics.

If the Government/Jacinda really want to stop the spread, the easiest way is to not give Aucklanders hours of notice of a lockdown. Lock it down with immediate effect and stop punishing the rest of the country. Lockdown should mean lockdown. No one in and definitely no one out - especially when it's one of the very contagious variants. But do that, then there's no opportunity for Jacinda to play the empathy card to the blinkered believers in this country and those around the rest of the world.