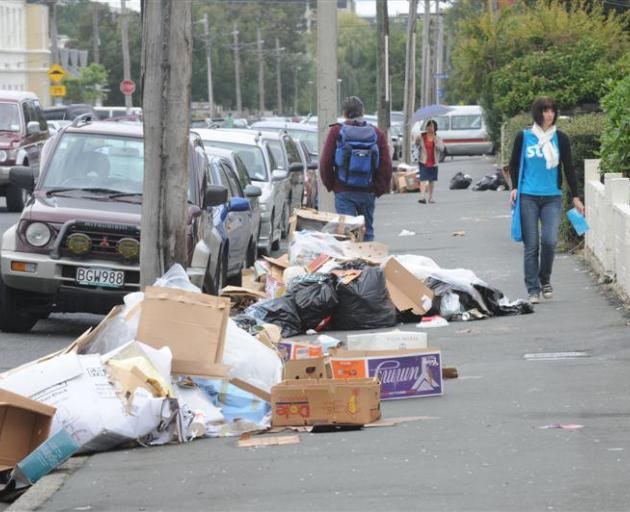 Changes to the Code of Student Conduct, if accepted, would allow the university's proctor to impose a daily fine on students in flats littered with rubbish. Photo by Stephen Jaquiery.
University of Otago wants the ability to fine students who have let the rubbish at their flats get out of control.

It is among a raft of changes proposed to the university's Code of Student Conduct.

But the student community is not happy and led by the Otago University Students' Association it is pushing back.

The changes to the Code of Student Conduct, if accepted, would allow the university's proctor to impose a daily fine on students in flats littered with rubbish to a degree it had "an adverse effect on the visual amenity of that place or property".

But the association's president Michaela Waite-Harvey said that was not the full story.

"These recommendations have been put forward through the vice-chancellor. That committee just exists to get perspective, that perspective isn't particularly taken into account and just because we sit on that committee doesn't mean we have endorsed it or we have created these," she said.

The recommendation marked a departure in how the university dealt with students, and put them squarely and inappropriately in students' homes, she said.

"This is an issue between tenants and landlords, tenants and property managers. The DCC [Dunedin City Council] themselves, if they can't even have the power to issue notices on private property how can the university think that it should have the right to do that."

The Code of Student Conduct stated its intent was to promote the safety and well-being of the university community.

But Waite-Harvey questioned how fining students for mess at their own flats had any relevance to that.

The association was also concerned the policy was vague.

It did not address what would happen in the case of mixed flats of students and workers, nor whether all students in all areas of Dunedin were subject to it.

Waite-Harvey suspected it would lead to the most notorious student haunts - such as Castle and Hyde streets - being targeted.

Students spoken to by RNZ were almost unanimous in their opposition and did not believe the university had any right to make judgements - and issue monetary penalties - in their homes.

In a statement, the university's proctor Dave Scott said it would only be used as a last resort.

"The vast majority of our students do the right thing when it comes to rubbish. For those who do not, the process is firstly one of engagement and education where we work closely with students to seek the desired outcomes," he said.

"Barriers to keeping up to date with rubbish expectations have been removed where able. For example, the university has two trailers which students are free to use, they come with brooms and shovels. The trailer can be taken to a local transfer station (where we encourage recycling) and can be emptied for free.

University of Otago Registrar Chris Stoddart said the policy set a minimum standard of sanitation for students' health and enjoyment.

"A proposed new provision to allow the proctor to issue a Notice to Clear Rubbish, where a student residence has a significant rubbish issue, is not about policing students for throwing the occasional piece of litter as has sometimes been portrayed. This is about situations where gross failures to deal with rubbish appropriately negatively affect others in the community."

At present, the proctor has the ability to issue a maximum fine of $500 under the code of conduct.

The University Council will consider the proposal later this year.

Ridiculous. When will the University learn that it is not their role to intervene in the private lives of Dunedin residents, (students or not). By most legal accounts these students are adults.
If the council were seeking this type of authority, to address the issue relating to any resident, then perhaps starting the debate would be feasible, however this is a ludicrous over-reach by the University.
These are private properties where a contract exists between tenant and landlord, and a relationship exists between landlord and the DCC. The University simply has no authority, role or interest here whatsoever.
There is a compelling argument to suggest that when The University took on the misguided task of closing down student pubs, and students started partying and drinking unsupervised, at home instead, this rubbish problem became a lot worse. It's time the powers that be at that institution pulled their heads in and ate some humble pie!

Really? Since when were footpaths private property? If I had a branch from a tree impeding foot traffic on the public walkway outside my house, I would get a notice from the council with a certain number of days to have it removed.
The filth and rubbish spewing from these properties effects neighbouring properties, residents and those simply trying to get from A to B. This has been going on far too long. There are legal remedies, and good on the university for finally saying enough, and looking for a resolution.

LePeche When will Dunedin learn that the control lies with the owners of the property and THEY should be prosecuted for not ensuring their rentals are free of weeks of vermin attracting trash! Same goes for crazy disturbing behaviour. Investor owners get away with murder and get rewarded handsomely.

Given the mess that parts of the student quarter get into, with broken glass and tipped over rubbish bins making the streets at times almost impassable, it's a bit rich of students and the OUSA to wonder why they are being "picked on" by the University proctor. As someone who frequently is asked to come into these areas to pick up often grossly intoxicated students, and risking expensive damage to my taxi either from punctures or materials hurled at our vehicles by said students, I find it extremely hard to have any sympathy for their position.

They've been allowed to get away with anti-social and borderline criminal behaviour for years, with the excuse of the "Dunedin Student Experience". Crack down on them, and crack down hard!

You're 'asked to'? Do you charge a fare?

Disgraceful nanny state from the university

Overstepping maybe, but disgraceful, no. It is time that people who leave filth on the street get pulled up for their anti-social behaviour. If the students in question don't want to be nannied, they need to stop behaving like entitled, arrogant, immature little brats.

If the university do not have the legal authority, then some arrangement should be made between the university and the DCC. Whereby a complaint can be forwarded to the DCC directly from University of Otago, and a Safety and Sanitation notice could then be issued, with x amount of days to remove the rubbish. Failure to do so resulting in a fine, and repeat offenders should see that fine increased.
Working in conjunction with the DCC seems to be the most logical path forward.

I've a friend who lives in that part of town, rats and mice are an all to common problem, as a result of the disgusting filth lingering around these flats. As is always the case, a small number of repeat offenders ruining it for everyone else.

To those whom it may concern: tidy up your room, you infants.

The above photograph is a blight on our landscape. Looks like it's time for the DCC to install CCTV cameras in the problem areas to catch and prosecute the offenders. It would be money well spent as opposed to installing a second weighbridge at the Green Island Landfill when it's going to be closed in 2023; how stupid is that!

Otago University Students' Association should consider the reputation of the university too. Students are part of it, not apart from it. Their professional standing wherever they go will be judged by how they behave at work and at home. Today I walked down Cargill St and took photos of a garden full of rubbish. A plague of rats upon you! Trashing our beautiful city. Take the rats with you - it's repulsive.