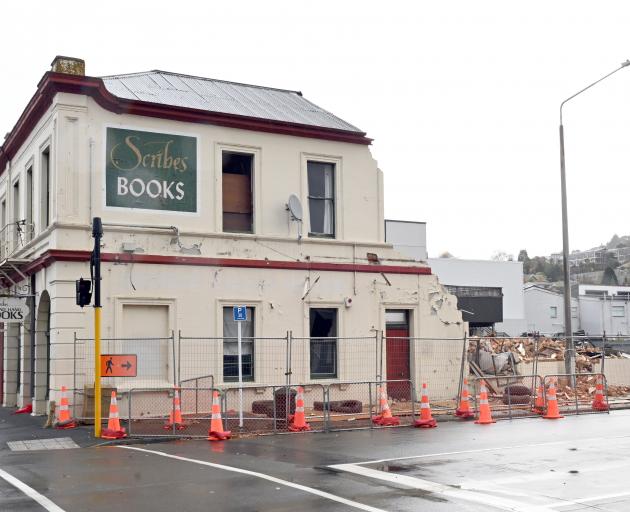 Demolition at the Scribes bookshop site in North Dunedin was halted last month. PHOTO: LINDA ROBERTSON
More  historic Dunedin buildings will go the same way as the Scribes bookstore, which is headed for demolition, a heritage trust fears.

The Southern Heritage Trust has warned a non-notified consent for demolition at the site sets a precedent, and that relaxing rules about housing intensification in Dunedin creates further risks for a city noted for its heritage.

Buildings with character, such as homesteads, could have their impact diminished by the addition of "cheap and ugly builds", the trust has suggested.

Trustee Ann Barsby said demolition applications such as the Scribes case, at the corner of Great King and St David Sts, should in future be publicly notified.

"The approach taken of a non-notified consent, where the public voice cannot be considered, sets a potential precedent for other character-contributing buildings now at risk also," Mrs Barsby said.

In a submission to the Dunedin City Council’s 10-year plan, trustees warned the council about proposed changes to its district plan that could make it easier for developers to pursue intensive housing projects.

The city’s character should not be subject to the vagaries of the housing market, the trustees said.

"Under this plan, our inner-city suburbs face the very real risk of being covered in cheap and ugly builds beholden to the success (or otherwise) of student demand, potentially ghettos of the future.

"And we will then lament what we have lost, for we will never get our character back."

Demolition at the Scribes site was halted last month when it was confirmed the developer needed building consents.

Applications for building consents had since been received by the council but were on hold pending more information, a council spokesman said yesterday.

He has said the 19th-century buildings turned out to be in poor shape and he had little choice but to proceed with demolition.

The design of the proposal was modified after comments from the council’s heritage adviser.

Mrs Barsby said the trust was not opposed to new developments.

However, replacement buildings being considered agreeable to streetscapes "should not be reason in itself to destroy character buildings with considerable history ..."

The trustees called for the council to carry out a cumulative effects assessment.

"If this proves that in fact the proposed approach will not cumulatively affect heritage amenity, then well and good," they said.

The trust argued the 10-year plan should have greater recognition of the city as the heritage capital of New Zealand.

"Dunedin relies on its built heritage as the number one point of difference to other cities in New Zealand."

I so agree with the Southern Heritage Trust. Dunedin is unique so please don't destroy this unique character.