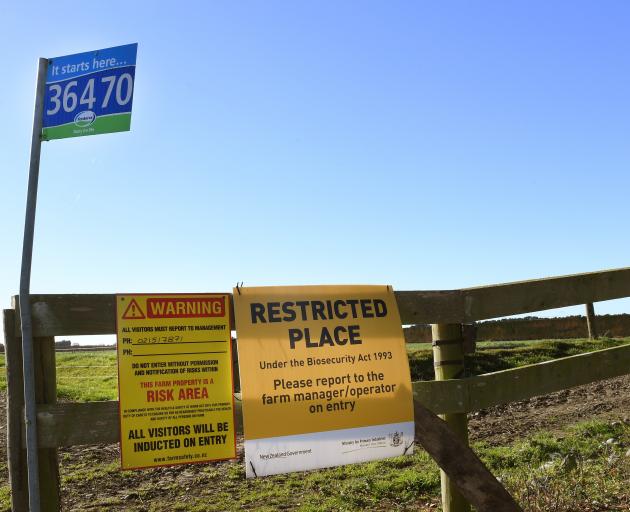 A farm in North Otago under watch.PHOTO: STEPHEN JAQUIERY
Albert Einstein once said, "I don’t need to know everything, I just need to know where to find it, when I need it."

In the case of the Ministry for Primary Industries’ response to the Mycoplasma bovis outbreak, it plundered on, ignoring those with the practical knowledge it desperately needed, and leaving a path of trauma in its wake.

A two-year University of Otago-led study has recently been completed on the psychosocial impact of the bacterial cattle disease on rural communities in the South.

Excerpts make harrowing reading, including the farmer interviewed who struggles to remember the birth of his fourth child in the midst of the outbreak, and the dominant theme of the "intrusive, inpractical and inhumane" nature of the MPI eradication programme.

Key findings included the "genuine, significant and lasting trauma" experienced by farmers, resulting from the management of the incursion, rather than the disease itself. For the veterinary profession, their knowledge was disregarded and they felt belittled, undervalued and unimportant.

The report spoke of a clash between a centrally driven and ill-prepared process disconnected from pragmatic farming solutions and farming culture itself, which privileges autonomous decision making and control.

There was a critical tension between farming being a 24-hour-a-day, seven-day-a-week life, and the 35-hour-per-week MPI bureaucracy. Farmers and vets struggled with MPI’s lack of preparedness in general, and poorly trained staff.

In its response, MPI acknowledged the eradication effort had been challenging for the farmers involved, saying "even when the process goes as intended and by the book", it was tough for those affected by movement restrictions and directions to cull their animals.

But, particularly in the earlier stages of the disease response, that book appeared be more of a hotch-potch of Post-it Notes, rather than a comprehensive — and practical — manual of how to manage such an incursion, with minimal stress on all involved, including farmers, rural professionals and animals.

It was understandable some mistakes, during what has been the country’s biggest biosecurity response, would be made, but the lessons from those should have been learnt a lot quicker.

And the sense of arrogance from MPI was unforgivable.

Heaven forbid if it had been the likes of foot-and-mouth disease; having MPI in charge would have likely seen New Zealand’s vital agricultural sector devastated.

Future biosecurity incursions are inevitable — and, as the study’s findings show, future management should focus on engaging with local experts, valuing farmer knowledge and developing partnerships between central decision-makers and affected local communities.

MPI does at least deserve some kudos; it appears to be well on track in its attempt to eradicate Mycoplasma bovis from New Zealand.

Allowing the disease to spread would have caused an estimated $1.3 billion in lost productivity in the cattle sectors in the first 10 years alone.

The ministry also says it would have left farmers trying to manage the disease at significant cost, and with major changes to the way cattle were farmed in New Zealand required to manage the risk.

That was why Government and industry were investing $870 million over 10 years to achieve eradication.

To date, more than 170,000 animals have been slaughtered and $206.4 million paid in compensation.

The disease is commonly found in cattle globally, including in Australia, and no other country has ever attempted to eradicate it. Instead they live with it.

The question is whether the cost of eradication in New Zealand — both tangible and non-tangible — has been worth it.

Let food be thy medicine and medicine be thy food. - Hippocrates
As of mid-2020, the World Organisation for Animal Health has identified 117 infections and transmissible illnesses affecting factory-farmed animals around the globe, resulting in hundreds of millions of animals being slaughtered. How many must die to control diseases, how many pandemics must the world face and how many ecosystems must collapse before we change the way we eat and farm?