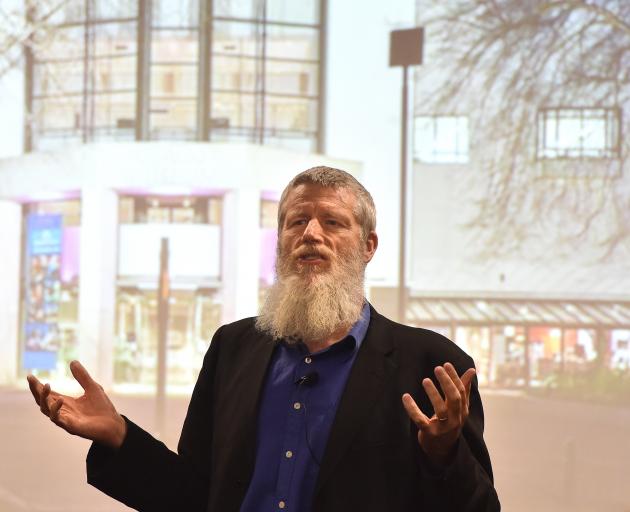 But success cannot be achieved without the Government and corporations removing barriers and enabling change.

It was one of the topics at the "Science Teller: Imagine a Sustainable Society" talk, which tackled the question of what it would take to live in a sustainable society.

Dr Carr said the commission concluded New Zealand needed to do more than the commitment it made in the Paris Agreement.

That was based on a range of factors, including how much the country contributed to the world’s emissions, its status as a richer country, and the fact that New Zealand had technology options available to it to create change.

"As a sovereign nation, it is your choice what you choose to do — but it not your choice whether you reduce emissions or not. You choose how — you don’t choose when."

But striking a balance between not moving too fast or too slow was tricky, he said.

"If we try to move too fast too soon, we could alienate communities and constituencies. If we wait too long, we will make it harder, more expensive and less likely to achieve our ambitions."

He believed New Zealand had the opportunity to achieve zero net emissions, but the impacts of agriculture was a major "challenge".

Half of the country’s greenhouse emissions come from biogenic methane emissions.

"We are truly extraordinary in that sense."

The commission acknowledged that the science to help manage those emissions did not exist "today", he said.

Dr Carr was later joined by a discussion panel, including Dunedin Mayor Aaron Hawkins and Ciara Foley, from School Strike for Climate Change.

They answered questions from pupils from schools across Otago, Southland and Canterbury.

If New Zealands emissions went to zero, the net benefit to the planet is so close to zero it will be imperceptible. Hammering farmers for their emissions is good in theory until we calculate NZ is the most efficient food producers in the world and NZ feeds 40 million people. So, if we stop, another country will step up and produce more emissions than NZ did. The greens wont tell you that though. This is 100% ideology over logic.

I wish it was as simple as that Pinckney. It is not about the difference NZ makes it about the difference the human race can make and NZ has already committed to playing it's part along with hundreds of other countries. Furthermore our farmers are not currently being "hammered" , in fact unlike most other industries they are being treated with kid gloves when it comes to GHG emissions. Neither should you believe the spin that we are "the most efficient food producers in the world" - it is simply not true especially when you take into account land use change and the huge number of livestock in NZ which is proven to have a higher environmental impact than plants grown for human consumption.
The fact is that the climate commission has compromised it's self by trying to find a middle ground between people like you who believe we should let somebody else sort the mess out and people like myself who believe we must make drastic changes immediately to reduce further loss of life from climate change. Good luck to the lawyers who are taking the commission and Shaw to court for not doing enough I say.

Shame feeding the world has polluted our rivers and poisoned our future and our children's health with nitrates and left heaps of the residents of this beautiful country unable to buy these products for their families to live healthily. But great news we are big producers. We should have matured enough as a nation to realise that what we do does matter for the present and future generations. Not take as much as we can now for the few to be extremely comfortable . Water is like the blood of the earth and poisoning it will do us no good what so ever.

"success cannot be achieved without the Government and corporations removing barriers and enabling change"
That is the crux of the matter !!!
Our cities are inefficient urban sprawls because of current and past urban planning laws that require mobility, causing traffic concentration and there for congestion.
This can not be changed in the short term as forcing change will drive up emissions, costs, community and economic disruption.
Emotive responses such as the push for more EV's on the roads are counterproductive if we don't first have renewable energy to power them.
Coal powered EV's are NOT good for the climate.
Having more or cheaper bus services will make little differences unless those services are powered by renewables first. Even then, our urban sprawl and low, aging population limits public transport practicality and viability.
Reducing farm production and increasing costs will only transfer production overseas resulting in lost income for the country with probable increased emissions.
The issues are complex because current regulation is constrictive in nature, not objectively focused on outcomes.
Freeing up the individual to innovate is the answer that works!