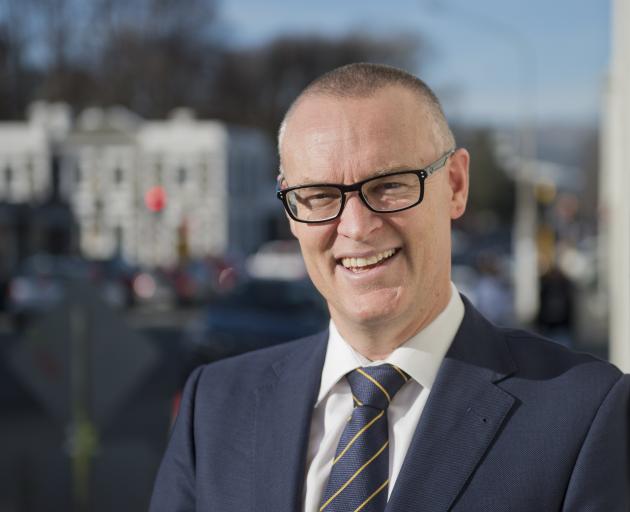 David Clark. Photo: ODT
Supermarket operators not behaving as they should need to analyse whether they have consumers' best interests at heart, Commerce and Consumer Affairs Minister David Clark says.

In a draft report released this morning, the Commerce Commission said the duopoly of Foodstuffs and Countdown was working against consumers and food producers, and stifling the chances of further bigger players coming into the market.

The Commission will next seek feedback from the public and the sector including a consultation conference from 21 to 24 September, with submissions closing Thursday 26 August.

Clark, speaking at a media briefing in Auckland this afternoon, said the draft report showed there were some problems in the sector and laid out some solutions.

It laid out a wide range of options, he said, including splitting up the supermarkets to expand the sector from a duopoly, or separating wholesale from retail.

"This is a really nice taster ... already we've got some really crunchy analysis and details that show the sector is not as competitive as it could be."

He said he was looking forward to reading through the 500-page report.

"We have one of the most concentrated grocery retail sectors in the western world, there's some OECD research which is pointed to in the report which sugegsts we have the sixth most expensive grocery sector in the OECD so there is a problem here."

He committed to the government taking action once the final report came through, saying that had not historically been the case.

"I think we all want a better deal."

He said anyone in the sector "not behaving as they should" must analyse whether they had consumers' best interests at heart.

"Some of the stories I've heard sound really unacceptable ... I would expect everybody in the sector is taking a good, hard look at themselves."

However, National Party commerce and consumer affairs spokesperson Todd McClay said the government had a role to play in the rising prices too and needed to act promptly.

"When they increase fuel taxes - which they have quite considerably - the freight company has to charge the veggie grower more to get the product to the supermarket which in turn puts the price up.

"I would, though, like to see the Commerce Commission be given more resource. They already have powers to do something about some of the challenges they've found around ... anti-competitive practices when it comes to new supermarkets wanting to get land."

He said while the inquiry was a good start and important, it probably told New Zealanders what they already knew.

"The government has responsibility for prices going up too, they should be doing something about that now not waiting years for a report from the regulator."

He pointed to rising rents and said hard-working New Zealanders were starting to feel like the working poor.

"New Zealand is a very expensive country and over the last three or four years those costs seem to have gone up."

He urged the government to be cautious and take the time to get the settings right.

"I think we can't rush to conclusions just yet ... there are many other reasons why prices are high.

"If there is a need for legislation I would ask the government to work with us and others because it's important we get it right. This isn't something that can be done or decided behind closed doors."

He said the government had effectively given a monopoly to the two large supermarket chains during the lockdown last year, when only they were allowed to open as essential services, and despite the commission's previous fuel study New Zealanders were continuing to pay more for fuel than they should be.

Reduced regulation must be the answer - ACT

"Before the government intervenes, it should ask how much of the problem is caused by its current interventions," he said.

"Foreign investment restrictions, employment law, it's not surprising that people find it hard to bring together captial assets and labour to provide a service for customers.

"It's very difficult to get foreign competitors who might actually have the skill, the capital and the know-how to compete in this market into New Zealand. It's just too hard - we push people away."

He said the government also had the "nuclear option" of unbundling wholesale and retail goods, but that would be highly damaging in the long term.

"I think the Warehouse Group submission really sets out the size of the mountain a would-be competitor has to climb ... there are so many barriers put in place by government."

The Commission's study was misguided and a waste of money, he said.

"There's clearly a problem, prices and profits are very high and suppliers report being treated wickedly, often, by the supermarket chains.

He said that under the previous National government, New Zealand had been the fourth-hardest country to send capital to.

Te Paati Māori co-leader Debbie Ngarewa-Packer said the study highlighted the desperation many whānau struggled with, and the government needed to be addressing the problem of making food - particularly, healthy food - affordable.

She said it was good to bring attention to the problem but solutions must be found.

The government needed to invest more into food sovereignty and get communities growing their own food more to disrupt the system, she said.

"To actually give focus to community and local solutions ... we see some massive food sovereignty going on at Parihaka, there's a lot of fabulous work going on.

"If we can give them the investment and the scale to be able to disrupt this food chain, we've then got not only local solutions but we've then got more competition to the food supply."

Supermarkets during lockdown had been able to manipulate food supply to suit their own needs, she said,

"There's two sides of this coin ... one, the impact that this monopolistic behaviour is having on whānau that can't not only access healthy kai but they can't afford healthy kai.

"The other part of it too is what it does to our own local economy where we've got supplies of food being paid off by large monopolistic behaving companies ... that have pretty much commanded what price that food is going to be charged at."

She said it was tough on growers and suppliers as well as consumers.

Clark said there had historically been a lack of action in the sector, and the study would allow people to have their say.

"It's a chance for people to tell their story ... obviously it's something Labour's passionate about," he said. "This is a government that has prioritised this report ... [the Commission] haven't had the funding before.

"That's why we've got the report back ... that actually for the first time in New Zealand's history paints a really concrete picture of what's going on."

Until the market studies had been done, there was not a thorough analysis of the market for the government to rely on in making its decisions, he said.

"Consumers of course already have the option of shopping around but waht this report shows is the whole market is not as competitive as it should be.

"Today is not actually about the final solutions ... they'll get that feedback and then they'll lay out the actions they think are the best.

"I certainly hope that everybody will be reading this report thoroughly including the duopoly in the supermarket sector."

He said that included all parties in Parliament.

Supermarket operators not behaving as they should need to analyse whether they have consumers' best interests at heart, Commerce and Consumer Affairs Minister David Clark says.

The only thing supermarket owners will analyse, is how much money they can make. Like the banks and power companies, they're probably making record profits even though I will concede that there are some shortages of imported products and shipping delays/costs have increased dramatically.

What better reason than to buy "Kiwi Made" ... yeah, I know it's a bitter pill to swallow, but now's the time you have to choose between Vegemite and Marmite.

As for loyalty schemes, well they're really just to draw you into the store, buy at premium prices, and make you feel good because you get 10c a litre off your fuel, or some other form of inducement ... to the supermarket owners, we're just fish swimming in a pool and they're trying every type of bait available to catch the customer and empty their wallets.

Exactly. Supermarkets are behaving precisely as they are expected to behave. Maximising profit is what businesses are expected to do. No amount of handwringing by the Minister is going to change that.

I really am NOT a fan of David Seymore or ACT, but I can't ignore his straightforward approach in this article. That same approach should be aimed at the building sector too. Food and Shelter....the basics are making a few very RICH at the expense of healthy food and healthy homes. Follow the money trail, it will lead to the problem with both FOOD and SHELTER. Until those basics are fair and affordable, our health, our housing and our social structure will continue to deteriorate.

"I think New Zealanders ... want to see a fair deal at the checkout, so we will act on the recommendations that we're given ... we will do whatever it takes to make sure New Zealanders get a fair deal at the checkout" this govt said that about the fuel study too and where has that gone?.... swept under the carpet like Kiwi build, 1 billion trees etc.....

Your comments reflect an infinite capacity to moan and whinge, I suspect you are a groundswell member. Always repeating the national party press releases without offering anything constructive to the debate.
So... what would you have the Govt do having identified a problem of retailers and suppliers ripping us off? Legislate? Govt interference? more compliance costs? more public servants to police the regulations? Or rely on on the industry to confess to their sins and adopt a self regulating code of ethical behaviour and self police it? Or heaven forbid actually grow a pair and adopt policies of true competition in the spirit of capitalism and free market economics and use the customers to police behaviour by allowing them to choose the best deal.
My preference is the egulatory path. human nature wont let the retailers do anything in a non compettitve market and there is no incentive to try.