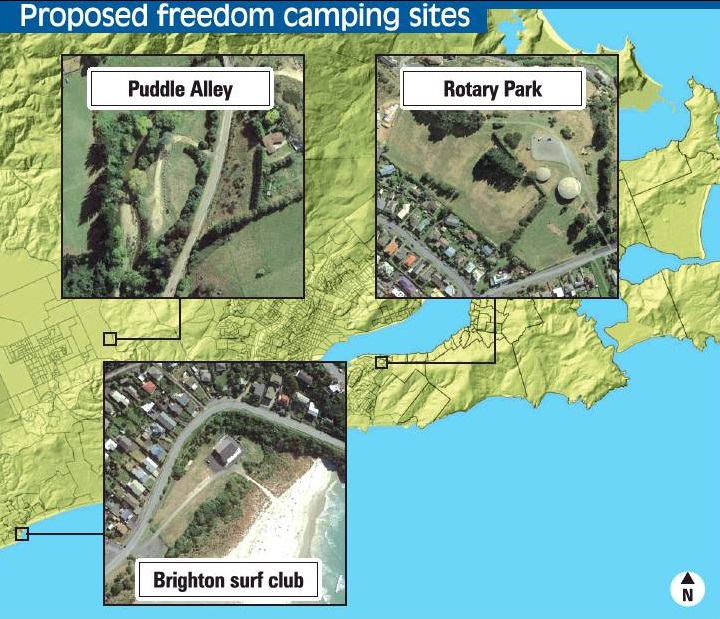 Three new freedom-camping sites are proposed for Dunedin, as the two already provided by the Dunedin City Council have reached capacity.

Sites at Rotary Park in Highcliff, a reserve at Puddle Alley near Invermay on the Taieri, and outside the Brighton Surf Lifesaving Club has been put forward as proposed in a report to a council meeting today.

The idea has already run into opposition from the Mosgiel-Taieri Community Board, which says the council should not spend money on non-self-contained freedom camping.

Sites at Ocean View, and in particular Warrington, have sparked complaints from some residents, while others have been supportive of the visitors.

The report said there was an increase of 37% in vehicles using the Warrington site during February and March this year, compared with the year before.

There were 157 vehicles there at Waitangi weekend.

Council recreation planning and facilities manager Jendi Paterson said yesterday the two sites provided for non-certified self-contained vehicles were at capacity during the busy season, from November to April.

``This has an impact on local communities and the infrastructure provided at those sites.''

Public feedback would be sought on the three new sites, and ``strict enforcement'' of the bylaw applied at Warrington.

Council staff had embarked on an education campaign directing campers to think about paid accommodation or camping grounds before considering the two sites.

An enforcement team had provided education on the sites' rules.

The local community at Warrington had reported high numbers of vehicles, muddy ground, noise and ``rogue defaecating'' in sand dunes.

At Ocean View there was excess rubbish, noise, defaecation in dunes and campers not obeying the 8.30am departure time.

The predominant freedom-camping issue the city continued to experience, the report said, was overcrowding at the two sites.

Staff had considered using inner-city parks, but it was decided that could cause congestion in mornings and evenings, and increase competition for local accommodation providers.

Instead, the three potential new sites had been identified.

Ms Paterson said staff were yet to engage at length with residents.

If the council decided to look at opening up further sites through a bylaw review, a full consultation process with the community would begin.

Saddle Hill Community Board chairman Scott Weatherall said when the council was looking at new sites, it made sense to consider Brighton, as the toilet block there had showers added for campers before the 2011 Rugby World Cup.

Mr Weatherall said he was not concerned about an influx of freedom campers into the seaside suburb, and thought the visual impact on nearby residents would be minimal if the site was managed well.

Mosgiel-Taieri Community Board chairwoman Sarah Nitis said her board did not support additional sites for non-self contained campers.

She said the board did not believe the economic benefits from campers - the report said 67% spent between $0 and $50 a day and 24% spent between $50 and $100 - was enough to support ratepayer spending on infrastructure.

``Why should ratepayer money support the non-self-contained freedom-camper movement that is hitting New Zealand?''

Other councils were moving away from such funding.

The board was also not convinced campers would use Puddle Alley, which was away from the coast.

The councils should not pay for extra sites for non self contained Vans. Theyncan use camping grounds, or become self contained. New rules needed for freedom camping.

Do we need to vote on this? A lot of Dunedin rate payers may just like a total ban on freedom camping.