Fuel prices have reached more than $2.50 for a litre of 91, adding to the financial struggles of many New Zealanders in the wake of Covid-19 restrictions.

The latest figures on fuel price app Gaspy show the national average cost of 91 octane petrol has reached $2.39 per litre.

Dozens of service stations around the country have set their price at $2.50 or more, which is believed to be in new territory.

In the Otago region, the cheapest 91 octane petrol available yesterday was $2.15 per litre at Gull Maheno, and the most expensive was $2.55 at Allied Glenorchy Motors.

The largest variances in price were in Oamaru (27 cents difference between top and bottom), Alexandra (19 cents) and Dunedin (17 cents). 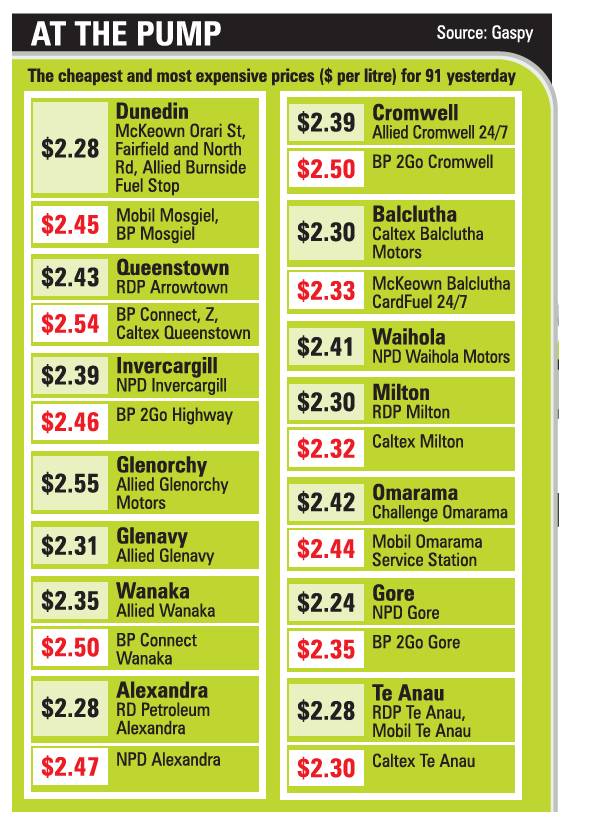 Both Motor Trade Association (MTA) energy and environment sector manager Ian Baggott and AA motoring affairs general manager Mike Noon the high prices were hurting a lot of residents who were not getting their full incomes because of the Covid-19 restrictions.

He said it was an issue affecting the entire globe.

‘‘It seems to come out of Opec (Organisation of the Petroleum Exporting Countries).

‘‘There hasn’t been the supply that was expected to be coming out of Opec, and of course all these countries around the world, the economic rebound coming out of Covid has been really strong.

‘‘So there’s a really high demand, not only just on petrol.’’

He said China’s business sector was being affected by a drop in coal supplies which meant electricity blackouts. There were also gas shortages.

‘‘Generally, there’s a real push on energy at the moment.’’

Mr Baggott said the value of the New Zealand dollar was also affecting the price of fuel.

‘‘Our dollar against the US dollar — it’s been volatile and it’s nowhere near what it used to be a few years ago.

‘‘Not only is the raw material increasing in price, but the money we are using to buy it has a little bit less value.’’

Mr Noon did not believe the situation would change soon.

He said there was a large variation in fuel prices in each city/region and it paid to shop around.

Don't worry the government had an inquiry and prices would drop 30c a litre remember!! also look how much is tax

And it is going to get better (isn't it?) ... with the Govt allowing the closing down of our only refinery in NZ.... Muppets.

These guys could not organise a p1ss up in a Brewery as they say!

$1.45 in Australia. Plus much cheaper regional housing, warmer weather, more jobs, better pay.. Everyone should move there :)