By Grant Miller
4 Comments
Forcing through water reforms is a cynical move by a Government that lost control amid a toxic debate, southern mayors say.

Councils had been primed to engage with their communities about the controversial reforms, but Local Government Minister Nanaia Mahuta confirmed yesterday they would no longer be allowed to opt out.

Some commentators decried what they described as asset theft by the Government, as council water systems will be taken over by four regional water services entities.

However, several mayors were uncomfortable with how ugly debate had become about reform of drinking water, wastewater and stormwater governance - including racial commentary - and they suggested the Government’s decision to press on was understandable.

It was generally accepted many councils would struggle to afford the infrastructure necessary in the coming decades, but estimated cost savings flowing from reform had been widely considered highly optimistic.

‘‘Councils bought into this reform process and the chance to have a dialogue with the community about it because it was supposed to be optional,’’ Mr Kircher said.

‘‘We were looking forward to having a proper discussion with our community — and that’s been taken away from us in a very unfair and cynical way.

‘‘We believe there is a case for change, because of the costs that are coming for water, but we’re far from convinced that the Government’s solution is the right one.’’

Dunedin Mayor Aaron Hawkins said assurances had been provided that councils would have a genuine choice.

However, elements of the debate became toxic and divisive and the most combative participants had harmed the process, he said.

‘‘Their approach to advocating for local democracy has cost us that very thing.’’ 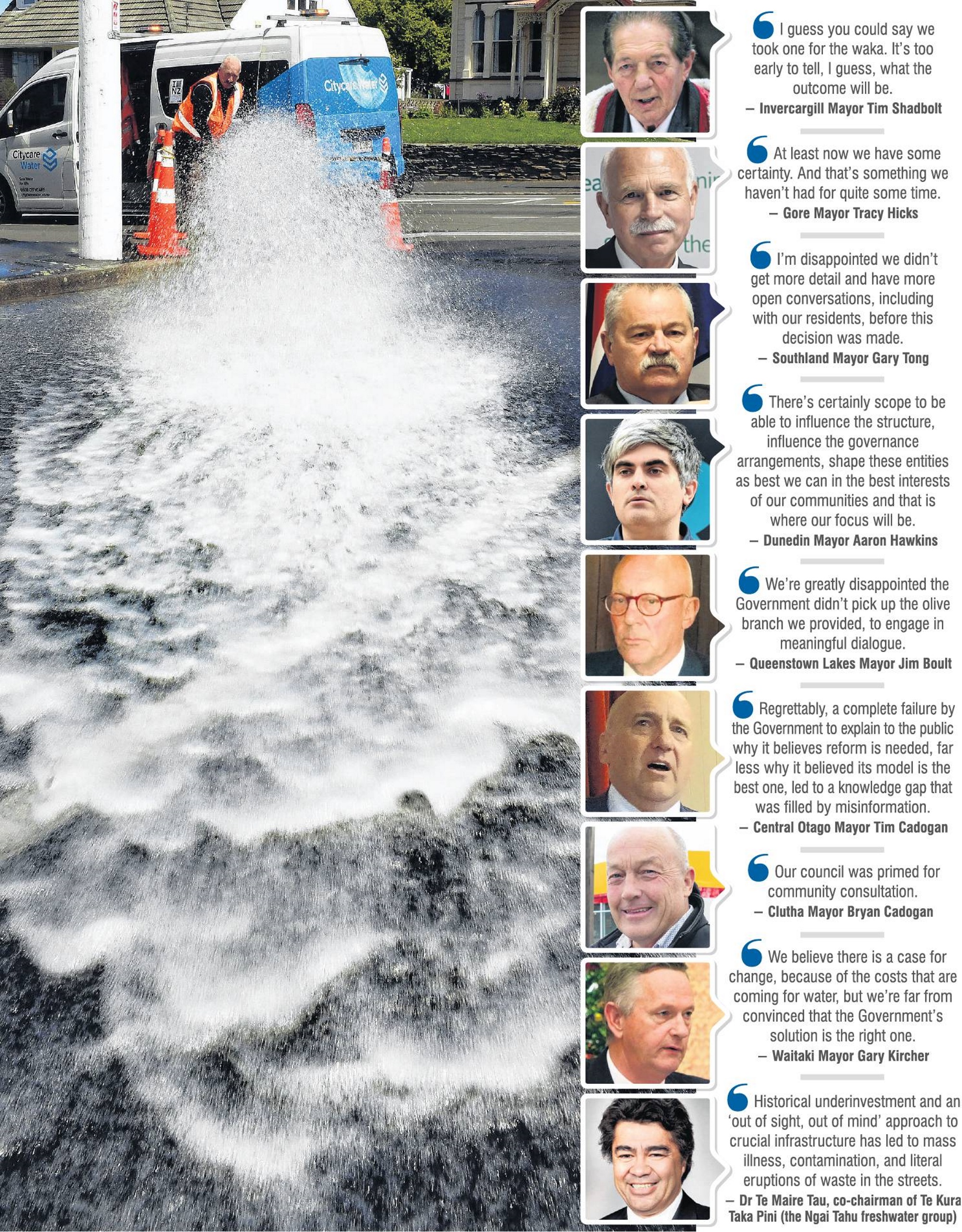 Clutha Mayor Bryan Cadogan said he could see why the Government chose to push on.

He was pleased the Government planned to allow some input from local government on the final shape of plans.

Central Otago Mayor Tim Cadogan said all the major political parties were clear the status quo could not continue.

‘‘Regrettably, a complete failure by the Government to explain to the public why it believes reform is needed, far less why it believed its model is the best one, led to a knowledge gap that was filled by misinformation.’’

The Central Otago mayor believed the Government had been pushed into ‘‘a choice between calling the whole thing off or forcing it through’’ and he was not surprised it pursued the latter.

‘‘There is still a lot of work that can be done to try to influence much-needed changes to the final outcome.’’

The regional entity would be steered by council and Ngai Tahu representatives at a high level, Dr Tau said.

‘‘This is our opportunity to get it right for our children and grandchildren.’’

Dunedin city councillor Lee Vandervis said the Government had ‘‘stigmatised themselves as tyrants, stealing our assets and our rights, and justifying their excesses with mass misinformation’’.

‘‘This is a theft of assets not seen since electricity reform, which was launched with the same rhetoric and then failed to deliver,’’ Cr O’Malley said.

Last thing I want is any of these boneheads getting involved in something requiring thought! Central government needs to work these issues. Far too complicated for these amatures.

This is not the time for councils to meekly roll over and have their bellies rubbed. They need to band together and force the government to reconsider and listen to the people. Take the matter to court. Do what they are paid to do - represent the local people.

Is it even a constitutionally sound reform? Why not take this matter to the court (justice is still supposed to be independent in this country isn't it?)

Cr O'Malley has referred to 'unicorn' systems before. He may mean mythical.