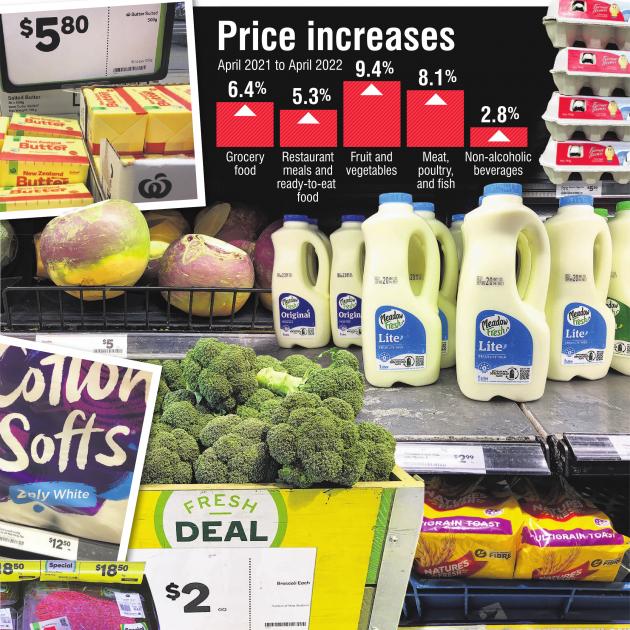 A montage of some of the food increasing in price over the past 12 months at a Dunedin supermarket.
A state-owned supermarket is a "pretty bad" idea and could drive food prices even higher, a University of Otago academic says.

New Zealand’s two supermarkets chains have come under intense scrutiny recently following the release of the Commerce Commission’s report into the sector, which found both companies were making excessive profits and controlled the market through a duopoly.

Consumer New Zealand has since started a petition asking the Government to set up a state-owned supermarket or ensure access to smaller chains and new entrants as an option to improve competition in the sector.

Grocery food was the largest contributor to the increase, influenced by hikes in the price of cheddar cheese, milk and eggs.

Prof Biggemann said he did not believe a state-owned supermarket was a feasible option to bring down food prices.

It would not have positive outcomes for consumers and would waste taxpayers’ money competing in a market it did not have experience in, he said.

"It’s not their role to do that either."

Some of the Commerce Commission’s recommendations were "rather naive", especially asking the supermarket chains to be more open to collaborating with smaller players in the market, he said.

Creating a state-owned supermarket would be inefficient because it would only increase demand.

The potential chain would have to compete with the existing duopoly for wholesale products and the extra demand would drive prices higher, he said.

It was very hard for a smaller chain, such as Night n’ Day, to set up in the market because some suppliers were not allowed to supply them.

That was where the Government should focus its attention instead of creating its own supermarket chain.

"It’s a pretty bad idea and I don’t think it solves the problem," Prof Biggemann said.

This week, Foodstuffs announced plans to cut the price of food by an average of 10% across 110 of its most-shopped grocery items.

Its rival, Countdown, said it would freeze current market prices on about 500 essential grocery items through winter.

How many more exercised academics will say what should not be done?

a seriously bad idea - look at our state owned energy company ? yah think we get discounts 'cause the state owns it? the media needs to stop politicising our food security and get on with the business of reporting fact rather than other peoples opinions. NZ has a formula and if the growers dont take control of their own business we will find ourselves eating cans of crap from unknown parts of the world.

Disagree with the academic. Neo-liberalism is a failure and examples exist that contradict this opinion piece. States are not energy companies any more than they are food companies, yet look at what Statoil has done for Norway.

Very bad idea for state to own supermarkets. But they need to smash the current system and go beyond the disappointingly weak Commerce Commission report. Break them up. Force the wholesale arm to sell to anyone and do not allow them to have exclusive contracts with producers. Force actual, real competition. Do what they did with Telecom and Chorus. Show some courage.