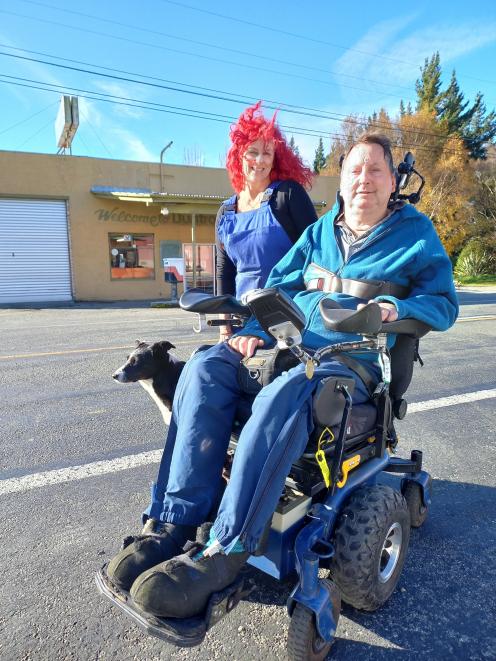 In the sleepy North Otago township of Duntroon lives a couple who have overcome massive obstacles to continue to operate a business in their much-loved community. Business editor Sally Rae reports.

There's a quote written in chalk on the blackboard outside the Duntroon Garage.

"Believe you can and you’re halfway there," it tells visitors to the rural business in heartland North Otago.

Inspirational quotes might be a dime a dozen but this one is no twee slogan — it is the perfect summation of the unassuming couple behind the business, for whom the term inspirational seems strangely inadequate.

Andy and Sonya Pickles have owned the garage — a hub in the Waitaki Valley township — since June 1, 1991, but it has been no easy ride.

Mr Pickles, a mechanic by trade, was left a tetraplegic after a motorcycle accident in 2004 when he slipped a gear and flipped over the handlebars during an off-road trail bike ride.

Yet five days a week, he makes the short commute from his home in Duntroon, in his electric wheelchair, to the garage which has provided an essential service to the community for decades.

But when the couple reopened this year after the Christmas break, that service was in jeopardy as they had no staff.

Lack of staff — like in many other sectors — was an industry-wide problem and it was particularly difficult to recruit in small, rural districts, Mr Pickles said.

The solution? Mrs Pickles (55), with her shock of pink hair and a smile as wide as the nearby Waitaki River, was now doing her mechanic’s apprenticeship.

"Crazy eh, at my stage. I could be retired by the time I’ve done it," she said, grinning.

It made sense, she reckoned, as the business would otherwise have had to close. She had thought she would give diving into the business a week and see what happened.

One week rolled into another week — she watched intently and asked to see some "basic stuff" as others helped out — and she decided it "didn’t seem that hard" so she thought she would take another step and embark on an apprenticeship.

With more art in her veins than oil — her proud husband described her as a very arty person — she worked in a photography shop before she married, and was a special needs teacher aide when Mr Pickles had his accident.

But she had also spent the past 30 years coming into the garage "off and on", particularly when staff were away, and filling in gaps where she could, so the industry was not entirely unfamiliar.

Rolling up her sleeves literally and donning her overalls was not a big deal. Faced with the dearth of staff, she thought "either step up or step out".

Mr Pickles described his wife as "very bloody-minded" — "she’s non-stop, she won’t give up" — and someone who did not like leaving things unfinished.

When told the phrase could probably apply to him as well, he said it was possibly in two different styles.

There was "no doubt" in his mind that she would make the grade as a mechanic, because of her determination and need for everything to be done right, he said.

Generally, an apprenticeship would take three or four years. Paperwork generally "slowed up the lads" but Mr Pickles expected his wife could "bowl it over" in a couple of years.

"Then I’ll be the boss," Mrs Pickles said, laughing.

As for her current boss?

"He’s very good, he’s very kind. I’d have been long gone if he was too tough."

Immaculately dressed in her overalls and sporting a black fingernail, the result of jamming it in the pliers while changing a tyre, she recalled how seeing a little yellow VW Beetle that she had fixed heading down the road had been particularly satisfying.

"It’s always nice when something goes at the end of the day," Mr Pickles said.

A North Otago boy, Mr Pickles did his apprenticeship in Kurow and then worked in Waimate for a year after getting married, before buying the garage.

The attraction? "It was for sale," he said succinctly.

"I wanted to work for myself," he said, adding they liked the rural environment.

Following his accident, friends came in and completed the work that needed doing and the business then closed for seven years until 2011, when the couple were approached by a mechanic who asked if he could work there.

A good tidy-up ensued and the doors reopened, much to the delight of the community. For Mr Pickles, his head was "already in the game" at that point — "I never left it" — and he had done a lot of work for people in the interim years.

Asked how she coped in the aftermath of her husband’s accident, Mrs Pickles said philosophically, "you box on". Even though they had lost a lot, it was about making the most of what they did have, she said.

And, for her husband, who had spent so much time at Burwood Hospital, there was always someone worse off there, he said.

"It’s not a good situation but what do you do? You’ve got to move forward," he said.

The Duntroon community had always been a great support to the couple.

"We wouldn’t have been able to do it without such a good community," Mrs Pickles said.

And that continued today — she acknowledged the patience of customers as they waited on her "to do things".

It was a 9 to 5 workday for the couple, who also had some other assistance at the garage, including Mrs Pickles’ father who was also their neighbour.

And, at the start of next month, one of their old apprentices, who they trained and who left three years ago, was returning.

It was traditionally a busy business; over the years there had never been enough parking spaces. At the moment, it was quiet, but the roads were also quiet — people were feeling the pinch with fuel prices, Mr Pickles said.

One thing in their favour was that when things were tight, people tended to fix things, and they were a repairer, not a seller.

And at a time when there had been a diminishing of country garages, Mr Pickles said they offered a skill set.

"We repair and look at things quite broadly and take on jobs that could be quite difficult," he said.

"And the community is really good to us," his wife added.

The distance from a larger centre — it was just that far away from Oamaru to be fairly handy — was also favourable, he said.

In 2019, Mr Pickles featured on 1 News’ "Good Sorts" segment, highlighting the work he did with his Mechanics Club children at the local Duntroon School.

Pupils had initially come to the garage once a week, but once it got too busy that became a bit of a health and safety issue, so he started going to the school.

"We repaired anything, pulled lots of things apart, every now and then we would put things back together."

The children learned how to weld, rebuilt motorbikes and learned many basic skills. For their last project, he got sheets of plywood, skillsaws and drills and they made go-karts.

On the day before he went to back to Burwood for surgery in late 2019, they lined up their dobbins at the top of the school hill, which was a highlight.

Mr Pickles went in for surgery expecting to be in hospital for six weeks, but it turned into 15 months as things "went a bit pear-shaped".

Covid-19 lockdowns, of course, interrupted Mrs Pickles’ ability to visit him, and with her trademark good humour and unflappable nature, she took the opportunity to "chuck out all sorts of things he didn’t need". "I was very busy," she said.

Mr Pickles said he was going well health-wise now. "I think they took a bit of puff out of me, I’m trying to get it back."

He had not done Mechanics Club since that stint in Burwood, but he intended to get it done once the garage was stabilised.

As for the long-term future of the garage? Mr Pickles said he had never been a long-term planner.

But in the meantime, he would continue to make the three-and-a-half-minute commute to work each day.

"If I get to the give way sign at the end of our road and have to wait for a car, I’m shot," he laughed.

Thank you so much for a truly lovely and inspiring story. Blessing be upon you and your wonderful community.