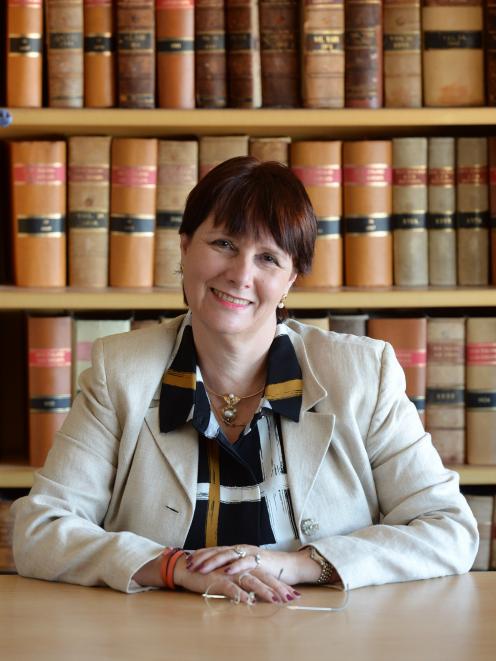 Kay Firth-Butterfield, the World Economic Forum’s head of artificial intelligence and machine learning, visited the University of Otago this week. Photo: Linda Robertson
Artificial intelligence is the way of the future, and visiting lawyer KayFirth-Butterfield is helping shape that future through her work at the World Economic Forum. Mike Houlahan reports.

Artificial intelligence is hard to define, but it is affecting everyone’s lives already and will shape the world’s future, a visiting world leader in the field says.

"I think a lot of people don’t realise what we call narrow AI is already in their homes and computers," Ms Kay Firth-Butterfield said.

An English lawyer, Ms Firth-Butterfield has a background in both law and international relations.

In the United States she became a professor and helped set up AI Austin, a non-profit organisation which encourages practical and responsible design, development and use of Artificial Intelligence — machines which can learn and make decisions without human guidance.

Last September she was headhunted by the World Economic Forum, and now heads its artificial intelligence and machine learning project.

In that capacity she advises world leaders and business executives on AI issues; last week she was in Davos for the WEF’s annual winter meeting.

"It is an amazing privilege to be able to actually create projects that will hopefully make a difference," Ms Firth-Butterfield said.

Ms Firth-Butterfield calls her part of the WEF a "do tank, not a think tank".

It works with together with organisations and governments on AI regulation projects. Three months are spent on planning and scoping and nine months on creating the project.

"If we are working with a country there will also be six months of piloting the regulation or governance structure we have come up with, and if that works well we hope it will serve as a model for other governments."

At the WEF’s San Francisco Centre of the Fourth Industrial Revolution, Ms Firth-Butterfield’s AI and machine-learning team sits alongside seven other AI portfolios — blockchain, drones, autonomous vehicles, medicine, the environment, e-commerce and cross-border data flow, and the internet of things.

"All of us have our specific subject areas, but the cross-cutting themes of the work we are all doing is ethics and values and social inclusion," she said.

"Whenever I look at a project I look at its impact on those three things."

Like many thinkers in this area, Ms Firth-Butterfield and her team find themselves battling to keep up with developments in such a fast-moving field, and how to ensure accountability, transparency, bias and privacy concerns are considered as the use of AI expands.

Those creating these new technologies might not have thought of the ethical and legal implications of their work, and governments might not have considered how best to regulate the field.

Greater education about AI and its implications was needed at all levels, Ms Firth-Butterfield said.

"One of our concerns is that the average citizen doesn’t understand enough about artificial intelligence to actually play a proper part in regulation or governance of the technology," she said.

"I think we see that also among business leaders who don’t know enough about the way AI could impact their business, and also how it may impact the brand if they do their artificial intelligence incorrectly — by which I mean irresponsibly and not ethically."

The regulation framework for artificial intelligence is pretty much a blank slate, with tools such as codes of conduct, protocols or global conventions few and far between.

"Not even around lethal autonomous weapons," Ms Firth-Butterfield said.

"I think AI will be of huge  benefit to humanity, but I absolutely believe the time is now for us to be mitigating the negative consequences.

"We need to go forward, but also understand the challenges as well."

While in New Zealand Ms Firth-Butterfield paid a visit to the University of Otago’s AI project.

The Dunedin-based, Law Foundation-funded initiative might seem light years away from the presidents, prime ministers and CEOs Ms Firth-Butterfield usually deals with, but she said national projects such as the one in Otago were vital for the development of a worldwide framework for the implementation of ethical AI.

"AI has its own specific challenges and benefits, and countries need to analyse those and say how will this work for us.

"Each country  needs to create its own artificial intelligence strategy ... and create its own centres of AI excellence, because at that point it will be possible to join in the global conversation."

affect will be humans will one day be replaced by robots. running advanced artificial. The PC will say welcome this as they live forever . They start with hybrids human .robot interface

Ms Firth - Butterfield is a thinker. Al do not, and will not, think. They are programmed and initiated by human beings. The quality of human intelligence, or lack of it, will determine the future.