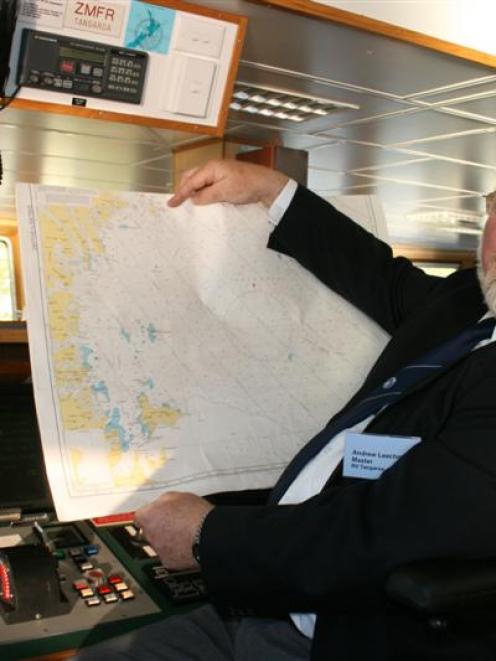 Captain Andrew Leachman with a map of the Ross Sea. Photo by Nigel Benson.
The most extraordinary continent on Earth is explored like never before this week when Expedition Antarctica brings it into New Zealand living rooms.

When RV Tangaroa set sail for the Antarctic in February last year, it was heading for the most inhospitable of seas.

It was carrying 44 leading scientists on a 50-day trip that would make history.

The aim of the voyage was to take part in a circumpolar survey by 13 nations to map Antarctic marine biodiversity for International Polar Year.

"There were 44 of our top scientists doing a census of Antarctic marine life in a pristine environment.

"Straight away, I knew there had to be a story in there somewhere," Quinn told Signal on a exclusive tour of RV Tangaroa in Wellington.

"It's a real road movie of the Southern Ocean.

I just basically watched and observed the scientists the whole time.

The footage includes close-ups of minke, orca, blue and humpback whales, as well as the ubiquitous penguins and seals.

There are also extraordinary images from the bed of the Ross Sea - it is as much outer space as under water.

A daggertooth fish looks like something out of Alien.

There are rare octopuses and never-before-seen sea creatures that don't have names yet.

And there are disappointing sights, too - the underwater camera picks up a beer bottle on the seabed.

"There were 20 different sampling devices, from nets to underwater cameras," Quinn said.

"It was a totally different perspective to see it from.

You go through various layers as you go down."

The film shows some very funny moments, too, such as the time when scientists wobble like drunken sailors as they try to walk to the servery in the cafeteria, with the ship lurching and rolling in the rough seas.

And there is genuine human tragedy.

A week into the voyage, skipper Andrew Leachman was contacted by Matamata police with the tragic news that Niwa oceanographer Dr Julie Hall's husband, Dr Trevor Atkins, had been killed while competing in the New Zealand Gliding Championships His glider had crashed on a farm at Waharoa, near Matamata.

Dr Hall had to make a heart-rending decision as to whether to return home or stay with the expedition.

The voyage took place in one of the Antarctic's worst ice years.

"I was all for not going, to be honest," Capt Leachman said from the wheelhouse of RV Tangaroa.

"We nearly didn't make it.

"They were the worst sea ice conditions in years.

"I didn't like the look of it at all.

"It was like fishing in a marguerita," he said of trawling cameras and scientific instruments up to 4000m beneath the Ross Sea.

The ice encountered on the journey was up to 70cm thick.

"I don't like to go much thicker than that.

"You've got to pick your way through.

"The trick is to escape before you get trapped," he said.

Capt Leachman is a veteran of eight voyages to the frozen continent.

He moved to New Zealand from Grimsby, England, in 1973 after he was recruited by the New Zealand Ministry of Agriculture and Fisheries.

He travelled to Bergen, Norway to pick up the $27 million state-of-the-art ship in 1991, when the 70m, 2282 tonne RV Tangaroa replaced the ageing James Cook as New Zealand's premier fisheries research vessel.

"There's nothing quite like a trip to Antarctica," he grins.

"Once you get below 65 degrees [south] you get into minus.

"Sea temperature is the major factor.

"This trip was fascinating and I really enjoyed the scientific side of it.

"When they'd pull up something new, I wanted to know about it."

The expedition was a collaboration between government agencies, the Museum of New Zealand, Te Papa Tongarewa, and the universities of Otago, Auckland, Victoria and Waikato and the Auckland University of Technology. - Nigel Benson