Alice in Wonderland behind the Iron curtain 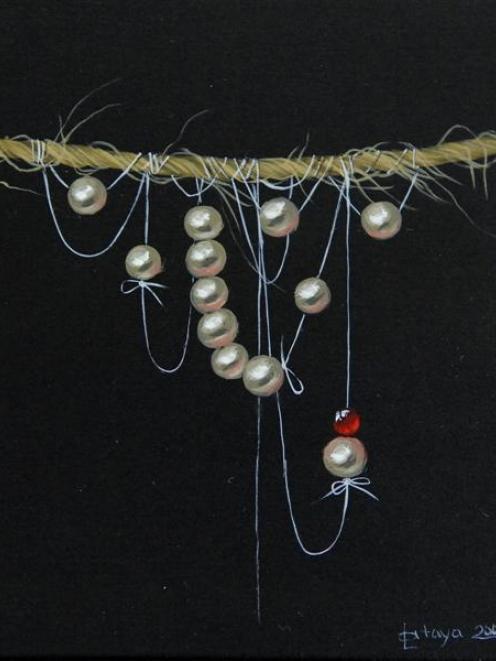 Pearls, by Leila Ataya
Come and visit Alice in Wonderland behind the Iron Curtain, where the fruit is poisonous and tiny robotic insects beetle about. Nigel Benson meets Leila Ataya.

The Russian artist has dipped into her own background for her latest solo exhibition, "Long Story about Life".

"Most of my current works depict a magical world, where illusion and reality blur," she says.

"The represented world is like a fly-agaric; so bright, attractive and beautiful, but filled with poison."

Ataya (28) has previously exhibited in group shows in Dunedin in 2005 and 2007, but this will be her first solo exhibition outside Auckland.

"This time it is a personal show and it's quite exciting," she says.

"I think it's a journey of my life in painting. From Russia to New Zealand. I came to New Zealand when I was 16 and I couldn't speak any English. It was very exciting, but it was also very hard. I love being here in New Zealand. It's very relaxed and beautiful."

The acrylic-on-board and canvas works featured in the 2006 edition of New Zealand's Favourite Artists by Denis Robinson.

"I did a lot of training as an artist in Russia when I was younger. Art education is more structured in Russia in some ways. It's a more traditional old-fashioned style," Ataya says.

"An apple you would paint and paint until you got it perfect. Here, you learn different ways of presenting objects. It's more about the conceptual. Even in your first year as a student here, there is pressure to present conceptual stuff.

"Most art in New Zealand is conceptual. It makes people think a lot harder. There's a good side to that and a negative side.

Ataya was just 16 when she was accepted into the Russian Arts College, in Moscow.

"I did a lot of different things, from ceramics to Russian decorative styles and icon writing. I also specialised in lacquer miniatures, which are decorative boxes. It's a traditional Russian style."

The following year she moved with her family to New Zealand and entered the Elam School of Fine Arts, at the University of Auckland, graduating in 2001 with a BFA in the discipline of painting.

The same year she won the Telecom Art Awards with her painting The Keys to New Zealand featuring on the cover of the 2001 Auckland phone book.

"My work has changed a lot from coming here," Ataya says.

"People in Russia say my work is not Russian anymore. Whereas, in New Zealand people see my Russian influence. It's not on purpose. Things just capture my attention."

In keeping with her iconic background, Ataya plucks tiny objects from her surroundings and twists them with metaphor.

"I like using pearls. Pearls are born in oysters and they're like tears, I think. The butterflies are partly mechanical and made with jewels.

"I want to show a different world in my paintings. All these things are recognisable to us, but like a parallel dimension, almost. They're like fairy tales," she says.

"I also use fruits, as they have always been looked at as more than just a source of food. They're intertwined and tangled with religion, life, sex and many other aspects of life and human nature."

Her paintings feature in private collections around the world, from New Zealand and Australia to England, South Korea and her native Russia.

"What I find interesting with my works is seeing how different people see different stories in them. It's interesting to me how people connect them to their own lives and experiences," she says.

"There is no final understanding to the works. It is the creative process of the viewer engaging with the painting through narrative.

"Through my paintings I create a visual story, which only the spectator can complete with the use of their own intellect, sense of humour and imagination."