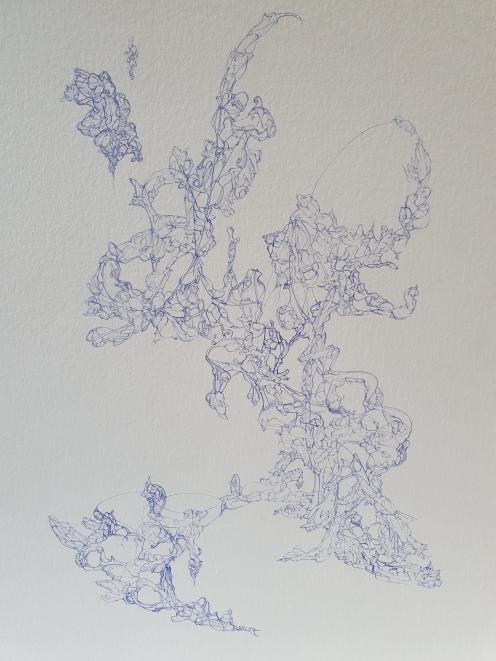 The particular alley that Motoko Kikkawa strayed into this time — and has stayed in for the past year or so — has resulted in fine-line drawings on watercolour paper made with a Bic biro. In Kikkawa’s hands (literally), this everyday, utilitarian pen is seemingly capable of a deftness and materiality more commonly associated with gouache, watercolour,or ink. Each of Kikkawa’s eight drawings (and one watercolour) is a distinct and intricate world caught somewhere between cloudscapes, root systems, reef topographies and octopus-like plants yet to be discovered. The forms in these primarily abstract worlds register as outlines of organic hollow shapes like cells, and amoeba that proliferate according to their own internal rhythm. These forms variously coil, cluster, or reach for one another by creating links resembling sinew.

The organic, elemental quality of Kikkawa’s untitled drawings is accentuated by two kelp sculptures hanging from the ceiling and a ceramic work covered in metallic spray. In ways that formally reiterate the shapes and relational exchanges in the drawings, one of the long strands of a kelp plant has been crosshatched over the others to form a lattice pattern. The strands loop back into themselves as do the sinewy, connective lines of Kikkawa’s drawings. If the kelp indicates a reference to the sea, the enigmatic ceramic work’s relationship to the earth is rendered (perhaps purposefully) with more ambivalence by the use of artificial metallic spray. 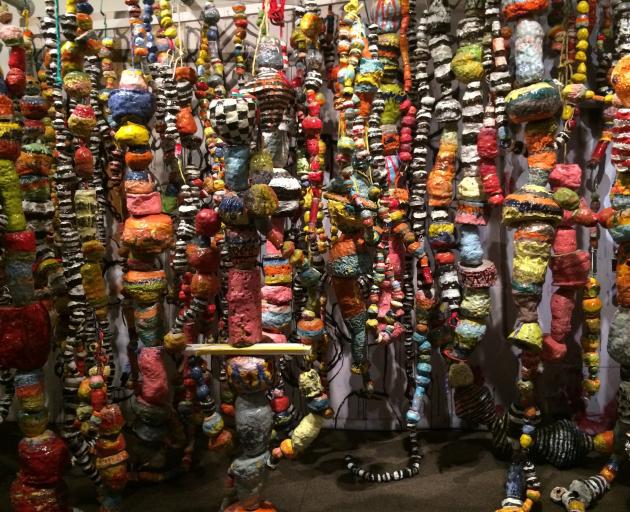 No. 9: work made in a number nine year, by Jim Cooper.

Jim Cooper's installation of suspended ceramic works exists in the productive terrain between the genres of painting and sculpture. Technically, these works are ceramic sculptures, but the scale, density, quantity and arrangement of work invite comparisons with abstract painting. In simple terms, the sheer profusion of large bead-like forms hung on rope start to behave like a canvas. This horizontal and vertical profusion also extends forwards, creating an equivalence of sorts with painting’s depth of field. As this sculpture/painting would be considered abstract, however, there is no intention of a discernible foreground, middle ground and background. Instead, the protrusion and recession of reds, oranges, pale greens, black and white creates a vibrant optical experience as the eye tries to settle on one area, only to be attracted by another. The effect of this optic vibrancy on the viewer returns an apparent kinetic dimension to the work.

Cooper is a supreme colourist, as these ‘‘number nine year’’ (numerology) works demonstrate. While the profusion of colours might initially suggest a haphazard approach, a closer examination reveals the artist’s considered use of complementary colours, particularly blues and oranges. Cooper primarily deploys colour in loose vertical bands or stripes that sometimes bleed into one another, though less so with the black-and-white painted works, which also include check patterns. Blending in colour-wise, if not formally, is a figurative sculpture: the number nine man? 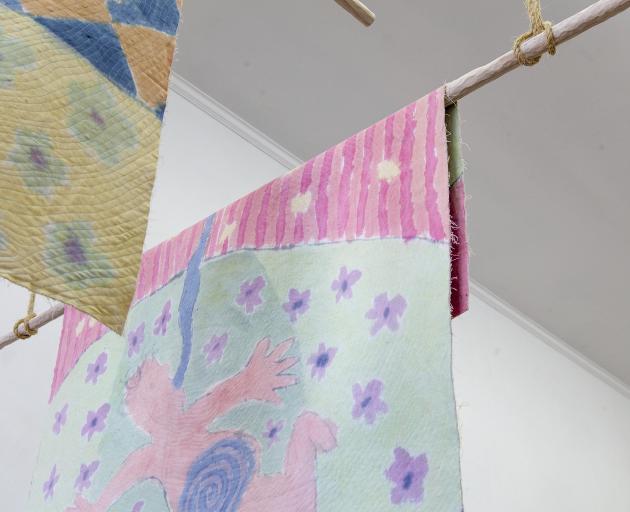 DUIRVIAS is a collaborative exhibition between artists, a tree and a memorial stone to people who died from Aids (and those who are currently living with HIV/Aids). The extent of this synergistic collaboration is evident in the text accompanying the exhibition by Connors, who writes: ‘‘I do not claim any of these works as my own.’’ This is in part due to an experience the artist had beneath a tree, which Connors describes as ‘‘transmissions’’, and reminds me — in terms of a shared relational encounter with a tree and subsequent relinquishing of authorship — of several lines from a poem by queer poet CAConrad: ‘‘I met a tree in Amsterdam and/stood barefoot beside it for twenty/minutes then left completely restored/yet another poem not written by a poet.’’

The works by Connors, Duffy and an online text by interdisciplinary artist Frances Duncan cohere around the attempt to convey, either first or second hand, the strange somatic and visionary experiences Connors had beneath a tree in Auckland. The hallucinatory aspects of Connors’ experience are expressed through five hand-dyed textile works that hang like skin or shrouds over whittled pine supports suspended on sisal rope, and finely detailed coloured pencil drawings. The flushed subject of the textile works is variously tethered, holds an orb of light, or flails their arms. Duffy’s video work amplifies the disorientation of Connors’ transmissions through multiple frames, screens, layered imagery, and sound.