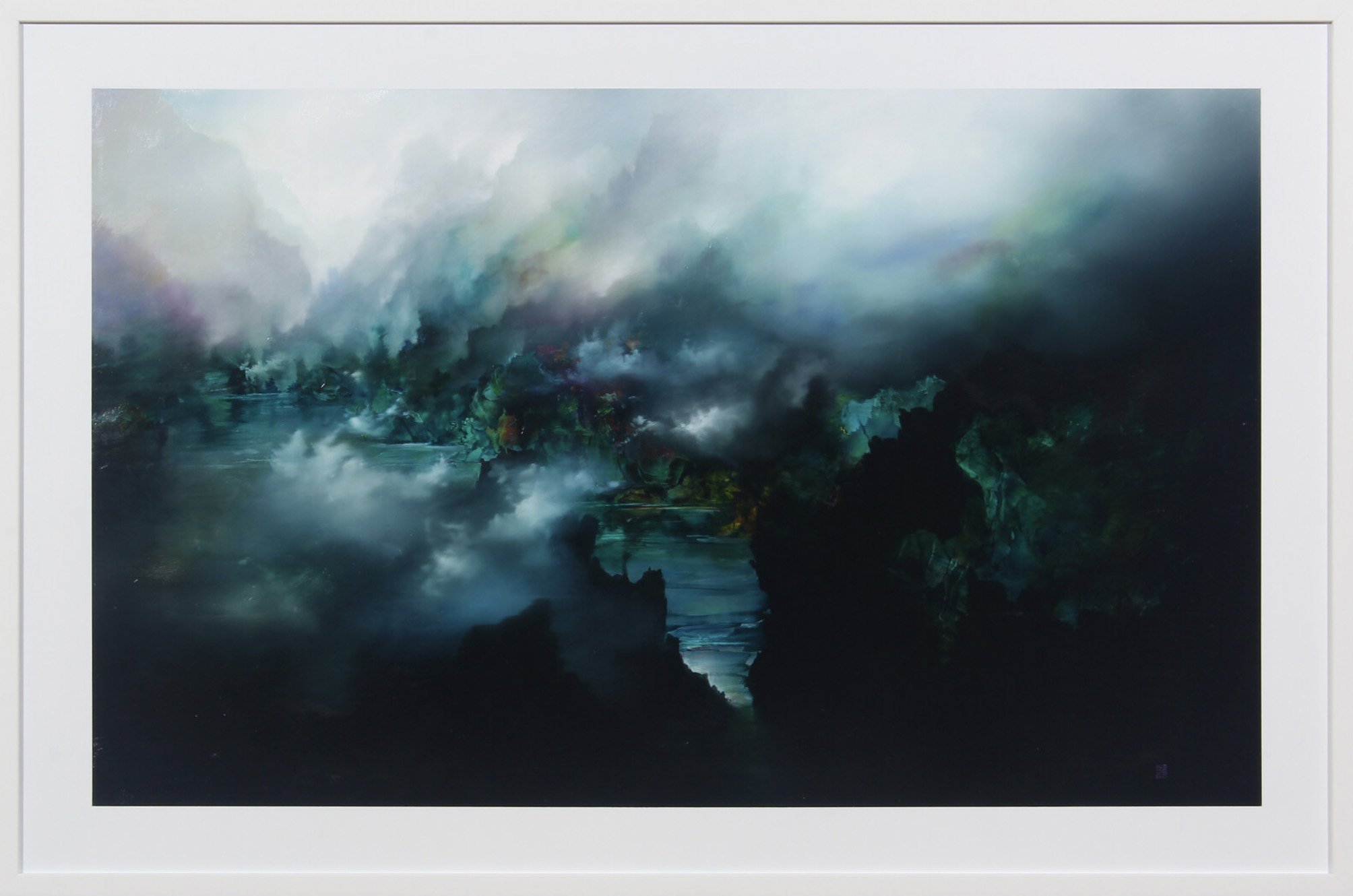 With works spanning multiple decades, Milford Galleries’ "Studio 9a" offers a curated snapshot of New Zealand’s unique art history. There is a strong focus on colour in the collection — the juxtaposition and interweaving of different tones, and conversely, the impact of the absence of colour. Simon Edwards’ Dark Oasis and Chance Landing are a symphony of the most subtle tonal transitions, countless shades of blue and green casting the scene with a mystical glow. Executed with technical perfection, the result is like stepping into a fantasy novel, the atmosphere only enhanced by the areas of negative space, where brilliant illumination falls into mysterious black shadow.

Advancing into the darker side — in more ways than one — Paul Dibble’s cast bronze Dancing with the Devil is similarly striking in its monochromatic black, as his long-limbed devil and hare are caught in motion, perpetually frozen in their jaunty, sinister partnership.

Neil Dawson’s multimedia feathers are simply beautiful, the radiating colour in each filament mirroring the glorious display found in nature, while the liberal use of gold leaf in Simon Clark’s Nature Culture series creates an ethereal glow, as if the works are lit from within. They might be panels from a grand, ancient monument, but the opulent is paired with the ordinary. In Nature Culture and Things That Are Not Broken, an old honey container, used as a makeshift vase, holds a vast profusion of wildflowers that seem to push out of the composition, butterflies still hovering around the cut blooms. 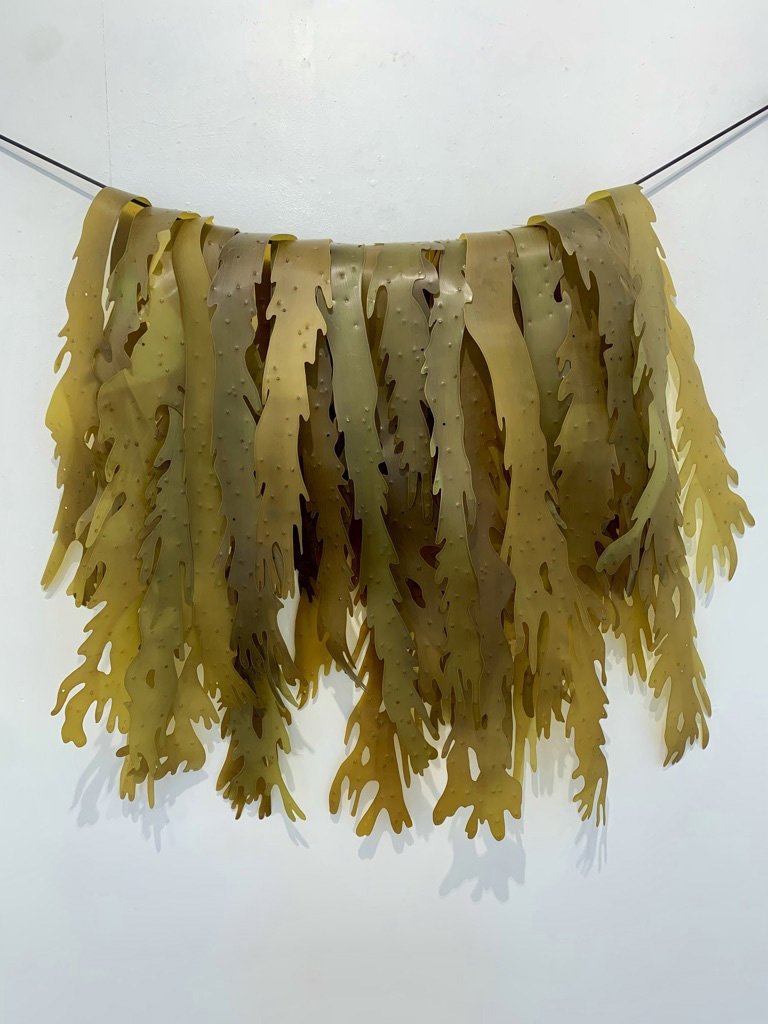 Although you couldn’t move much further inland than Cromwell’s Hullabaloo Art Space, the gallery currently evokes the sights and sounds of the coastline. As fronds of seaweed seem to move in a breeze, you half expect the shriek of seagulls and the tang of salt in the air. Andi Regan’s latest collection, "Sea Tangle", both builds on and diverges from her iconic cable-tie sculptures, exploring the possibilities of new materials in a cohesive, striking installation. Her meticulously hand-cut and dyed strips of nylon mimic the form of seaweed and marine life, with intricate precision and to eerily beautiful effect.

The works are impressive at a distance, but up-close, the sheer amount of detail is evident.

Every inch of the curling, writhing, rustling seaweed is highly tonal and textural. Small bumps and holes perforate the autumnal tones of Surge, while the flaxen ribbons of Sea Tangle have great depth, alight with winding veins of colour.

Regan often confronts the viewer with diametrically opposing media and subject matter, recreating the workings of Mother Nature with the most industrial and man-made of materials. The result is visually appealing as well as thought-provoking, a reminder of the continuing threats to the ecosystems of real-life coastlines and waters across the globe. 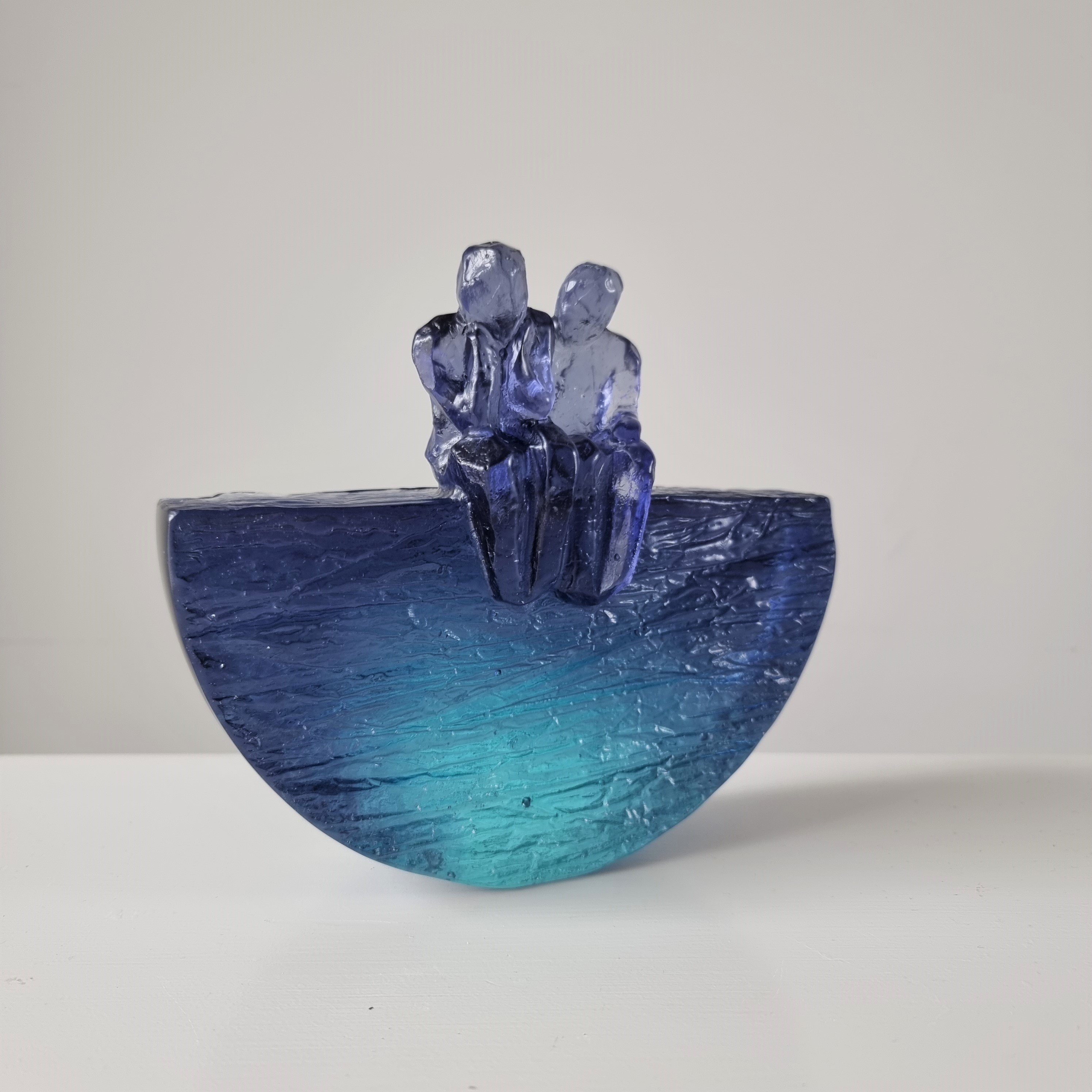 An acrobatic cat practises his gymnastics on a rolling barrel, twins lean into each other in a mirrored dance, and a figure balances on one hand high in the sky, the image of controlled strength and elegance. With her bronze sculptures, Melissa Young creates a little village of faceless inhabitants, each one sympathetic and distinguishable, bursting with personality despite their smooth-featured uniformity. The busy little figures are intent on their tasks, exuding single-minded concentration, as if they’re either unaware or uncaring of an audience. Young works with a very solid, static medium, but her creations bring life and energy into any space.

Nearby, Di Tocker’s own small figures sit, perched morosely on the edge of walls or luggage, heads bowed in contemplation. Born of cast glass, an incredibly adept hand, and a lot of sensitivity, Tocker’s subjects are effectively shadows — as if the artist has wrought molten glass like a pencil, drawing out the exterior shape, but filling in no details of eyes, nose, mouth, or expression. Yet, somehow, every piece manages to convey absolutely aching emotion. The palpable loneliness of a single figure hunched alone, literally on the edge. The comfort — sought and shared — between the Team of Two, coming through so clearly that the viewer feels they’re intruding on a private moment. Visually and structurally, Tocker’s art is very different from Young’s, but both artists possess the knack of communicating a great deal with a single line or angle. 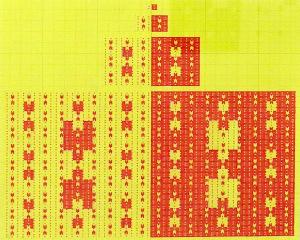