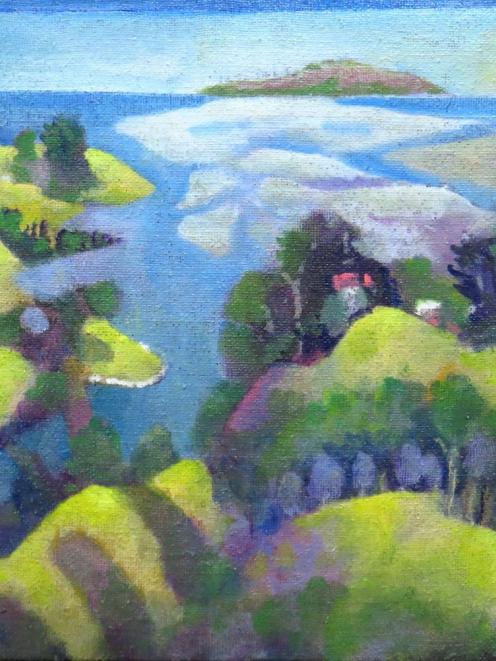 Rodney Hamel's landscapes on display at Moray Gallery have a lightness of touch and an airiness, which suits their views across the New Zealand countryside.

Hamel has taken his aerial approach, looking across the landscape as if from a light aircraft or drone to display the land laid out in a patchwork before him. In several works, notably Brighton with James K. Baxter's House, this has produced an intriguing forced perspective, as we seem to be simultaneously close to the house and towering above the river and beach. The scenes, many of them of coastal Otago, have a warm, friendly appeal which is largely the result of Hamel's seemingly paradoxical attention to detail and simplification of form. Figures rarely appeared in the works and when they do (as in his two Cambridge images) they are there to complement the subject rather than to be the main focus of the art. The artist has used his materials in an unusual way. With a palette of soft colours over rough hessian base, Hamel's works almost appear as gouache or watercolour painted on to thick, rough-surfaced paper. The artist has capably used a painterly approach with subtle shading and strong yet muted lines to produce fine, recognisable scenes in his homages to the countryside. 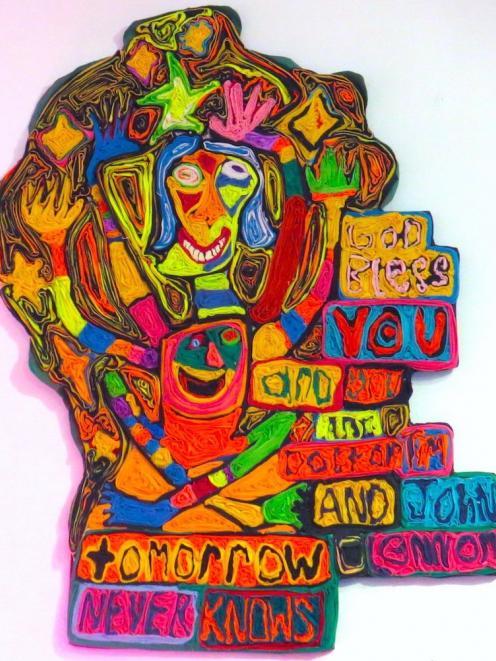 If you're going to Brett McDowell Gallery be sure to wear some flowers in your hair, because 1967 Haight-Ashbury has invaded the gallery. One can almost smell the patchouli, and don't be surprised to see the ghost of Jerry Garcia lurking amid the shadows of Jim Cooper's extraordinary psychedelic menagerie.

Cooper has made a career of creating sculptures based on 1960s culture, and his current exhibition, ‘‘The Cellophane Circus Presents Cut Grass’’ is no exception. Wild-eyed acid-drenched caricatures of people and their pets fill the gallery turning from the winter space to a hot day in the summer of love.

Cooper has expanded his sculptural practice to include not only ceramic works but also papier-mache. By using this material he has been able to skilfully create larger pieces, works too big to have been made in one piece in a kiln. This change has allowed for some dementedly happy individual works, such as his many-handed people and an appropriately named furry pink dog called Lamington. Surrounding the figures are a series of wall hangings, among them oversized strings of beads and individual two-dimensional pieces such as Tomorrow Never Knows. The latter provide suitable mantras and a perfect backdrop to Cooper's hippy paradise.

‘‘Midwinter Exhibition’’, Liz Abbott
(Koru Gallery)
Lockdown necessitated a change of direction in Liz Abbott's art this year. A series of works which she had begun at Bethune's Gully provided the start for her current exhibition, but later works consisted entirely of views from the immediate neighbourhood of the artist's home.

The Bethune's Gully works depict the eerie lighting of January 2020, when, as a result of Australian bushfires, southern New Zealand was bathed in an eerie salmon-coloured glow. These images are exemplified by the punningly titled Bark Ode and show a strong sense of line and colour.

More intriguing,however, are the lockdown works. These images predominantly depict the night streets of Opoho in bold shades of sepia and orange as seen under the glow of stark sodium lamps. The minimal palette and almost vicious lines give these oil works and pen sketches almost the feel of woodblock prints. 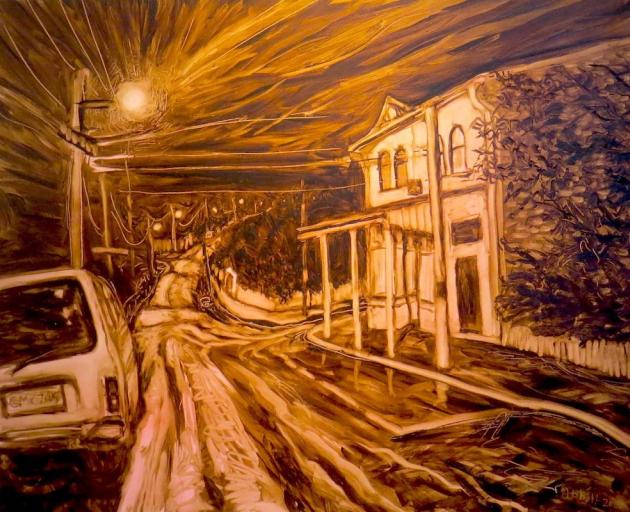 Abbott sees this exhibition, with its reportage-like emphasis on the recording of her immediate surroundings, as almost a continuation of an exhibition she produced at the Hocken Gallery over a decade ago. In that earlier display, Abbott created a series of paintings based on watercolour and pencil sketches by Victorian Dunedinite Fanny Brunton, who depicted the Otago landscape as it was, producing a time-capsule slice of Otago.