In this week's Art Seen, Robyn Maree Pickens looks at exhibitions from the Kawita Vatanajyankur, Nichola Shanley and Beth Caird 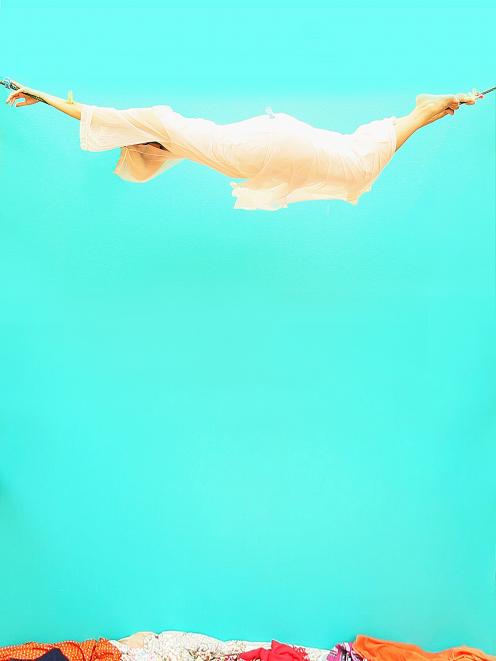 The main function of DPAG's Rear Window space on Moray Pl is to make art accessible to passers-by. With The Robes (2014) a video work by Thai artist Kawita Vatanajyankur - the curators have successfully extended Vatanajyankur's exhibition on the first floor of the gallery to the street outside.

While Vatanajyankur's performance-based video works within the gallery take place in fictional ''indoor'' settings, The Robes is an apt choice for the Rear Window, as it takes place in a fictional ''outdoor'' setting. I say ''fictional'' because Vatanajyankur's frequently gruelling performances of repetitive labour are intentionally abstracted from real world markers. In the case of The Robes, Vatanajyankur treats her body as a garment pegged to a clothesline.

The line is a sturdy rope, and the backdrop is an impossibly perfect and manufactured blue: digital blue. Yet this approximation of being a garment drying on the line against a perfect blue sky nevertheless corresponds with the world outside. Vatanajyankur drapes her body over the rope and clasps it tightly.

Inevitably the pegs, which pinch her skin, are ineffective, and she falls down over and over on to a pile of brightly patterned fabric. Vatanajyankur is concerned with female labour in developing countries, and perhaps in this work, the garment industry. 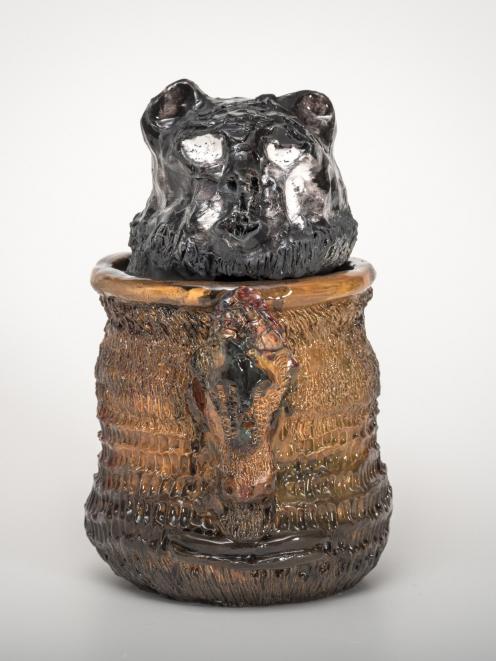 This is the second time I have had the pleasure of reviewing Nichola Shanley's extraordinary ceramic works. Even though I thought I knew what to expect, Shanley's utterly unique and quixotic works captured me completely, all 24 of them: vessels, jars, urns, bizarre sculptural forms, holders of one kind or another.

But improbable holders, unlikely holders of anything except their own decorative form and essence. Shanley melds archaic worlds such as Egyptian canopic (burial) jars with imagined worlds beyond recognisable historical time.

This fusion manifests as curious aggregations of grottos, coral, vines, and animal heads, such as Singing Pot (2018) where the vessel's stopper could be a turtle or plant-eating dinosaur, or Black Animal Head on Brown Body (2018) in which a bear-like head stares out with zombie-white eyes.

Shanley works with the most unforgiving form of clay ''porcelain'' but wilfully avoids exploiting any of its translucent properties. Instead the unimaginable whiteness is elaborately textured with tiny indentations and striated ripples, then richly saturated in a forest palette of dark greens, earthy browns and ruby reds.

You may not want to meet any of these creatures on a dark night, but they will hold your attention.

Beth Caird, Rules for leaving a small town
what should I do now, with my hands?, Beth Caird (Blue Oyster)

In the context of Beth Caird's exhibition, the answer to its title-as-question might be: ''to grieve'', as ''what should I do now, with my hands'' cycles through biographical and fictional grief. But this answer would in turn trigger another question: how do hands, and how do we, grieve?

How do we account for a person who is no longer with us? Caird's approach is formally, aesthetically, and physically expansive and generous in its meditation.

In formal terms, Caird structures her study of grief on the ancient Greek poetic form of ''epyllion'', which translates as ''little epic''.

The disparate text and video works speak to each other. And Caird speaks to, or with, Canadian-based Samoan and Pakeha artist Faith Wilson. Caird has opened up her exhibition to include a text by Wilson, in a way that feels generous and generative.

Both artists have connections to writer, art critic and film-maker Chris Kraus, whose synthesis of confessional, philosophical, and fictional continues to be influential.