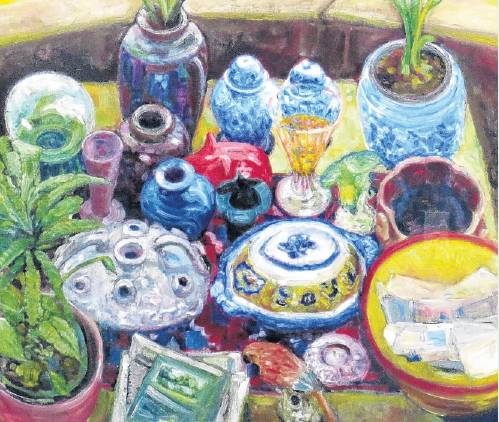 Annie Nevin's  paintings capture moments of time touched by warmth and gentle ease. Studies of interiors and their furnishings, the works reflect aspects of the lives of the inhabitants of the rooms without once showing the people themselves.

Though the oils are best categorised as still lifes, this is misleading, as many of the works are better considered portraits by proxy. We know the personalities of the owners of the vases, cushions, and statuettes indirectly by the presence of the objects themselves.

The artist’s love of haberdashery and the items associated within it comes through strongly in the devotion taken with the depictions of furnishings and fabrics.

While not intended as photorealistic representations, the sense and evocation of the interiors is clearly evoked. Nevin cites the influence of Grayson Perry’s sociological and anthropological observations of daily life, but artistically the style is more reminiscent of Frances Hodgkins’ studies.

The works are an allegory of the 2020 lockdown. Enclosed in our rooms, we created our own self-contained worlds, each of them unique reflections of our lives. It is to these personal spaces that Nevin’s exhibition is devoted.

Ironically, it is the one work created before lockdown began which depicts the only exterior space, showing the multitude of other houses, other lives, and other spaces that make up the world. 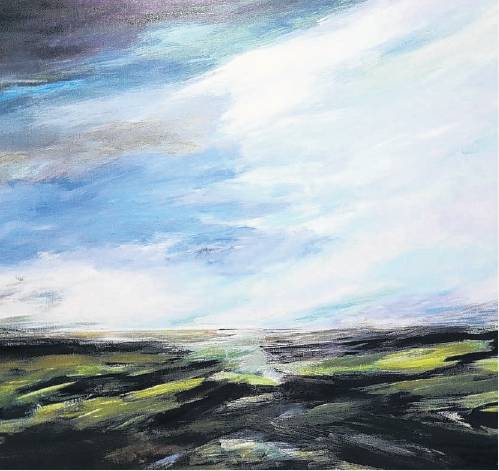 Sound of Rain Over Taieri, by Angela Burns.

Angela Burns has long displayed her ability to capture the atmosphere and light of a scene, rendering it in broad horizontal strokes of colour. In that way, the essence of a place is represented but the exact location remains tantalisingly mysterious.

In her latest exhibition, Burns has moved away somewhat from this sense of abstraction, producing works that are not only redolent of place but depict it in a more representational sense.

In several pieces in ‘‘Marking Light’’, such as Wild Sky Over Strath Taieri, location is clear in image and title.  This is not done to the detriment of the works, which continue to shimmer with impressionistic colour and delight with their broad, bold strokes.

In other works, light and colour prevail, appearing as patches and regions; Mist on the Estuary, Karitane is awash with green-golds and deep blues, and Edge of Summer is dominated by deep rich green.

The most impressive works in this exhibition tend to be those which fall between the extremes. Rain on Bay in particular is a piece where landforms are implied but not directly stated, allowing the viewer’s mind to fill in the blanks and to - in the artist’s words - ‘‘be inspired by the energy, dynamism, and movement within a landscape [which] transcend the tangible and the static’’. 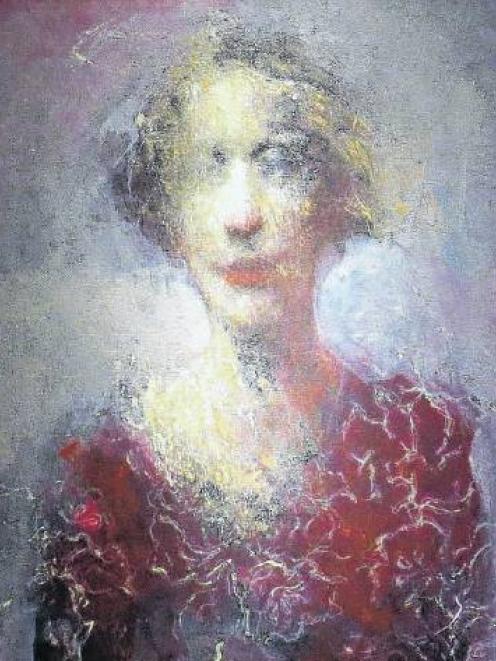 Viky Garden uses the self-portrait as a means of examining womanhood, both on a personal level and as a reflection of womankind in general.

In ‘‘Grit’’, Garden explores the mental and physical states accompanying menopause, using her self-images as a tool to examine its accompanying psychological, emotional and sexual changes.

The exhibition is poignant, emotional and sometimes brutal, yet above all, truthful. Gaunt faces stare from the canvases, each bearing witness to full lives which have taken a dramatic turn.

It is not the faces themselves which instantly draw the attention, so much as the way they have been created and displayed. There are no fine brush strokes - the paint has been applied using card and wood to spread it around the canvas jaggedly yet forcefully.

The canvas is equally jagged - the works hang from unstretched canvas which has been deliberately left with frayed edges as if to suggest the unravelling of personality.

Accompanying the main works are a series of ‘‘Grit Ikons’’. These small painterly pieces are extreme close-ups, often containing no more than the part of a face, each of which is tightly and ornately framed.

The resulting images, which bring to mind both orthodox church icons and Victorian photographs, are claustrophobic and suggest the impending breakdown/breakthrough which can accompany great life changes. 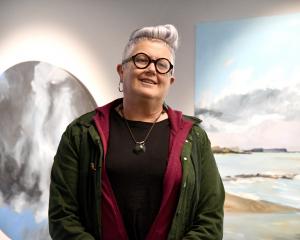 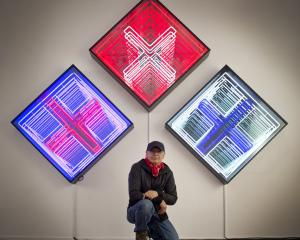