Jay Hutchinson latest exhibition at Olga Gallery continues his ongoing exploration of the urban environment with a sonnet to detritus. The artist has photographed litter he has seen on the roadside during his daily commute, and used these photographs as a basis for embroidered works on printed canvas.

Hutchinson has long been fascinated with urban life and the borderline between art and pollution. Some of his misspent youth was involved in tagging, the large and often baroquely embellished graffiti signatures often seen around a city.

As such, his move to professional art has seen him questioning the often arbitrary line between high and low art, and also has led him to the understanding that commercial branding is in itself a form of professional tagging.

Even after a product has been consumed, its logo-adorned wrapper will often be found as roadside litter while simultaneously continuing to advertise its product.

Hutchinson has subverted the idea of rubbish being an unattractive pollutant byproduct of commercialism by reclaiming it as art and presenting it in the gallery space using that most delicate and even genteel of media, embroidery.

What was literally throwaway has been elevated to something of commercial and aesthetic value, and this has produced a pleasing, thought-provoking and wryly witty exhibition. 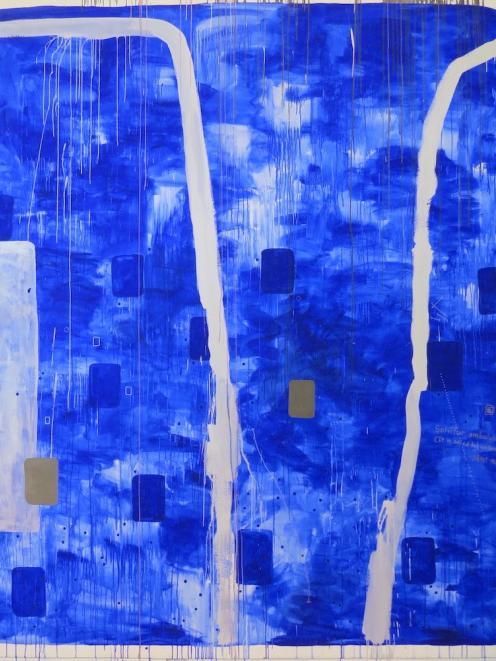 In ''The Falls'', Auckland artist John Reynolds has produced a flamboyant, yet ultimately intimate open letter to the late Colin McCahon.

The work reflects McCahon's waterfall images, in which white arcs curve over empty darkness. Over these, Reynolds has tried to map a mysterious blank in McCahon's life when the artist went missing, reputedly in a drunken haze, after getting lost in Sydney. McCahon's imagined journey is traced through 14 panels, some simply coloured and others featuring text relating to McCahon's and Reynolds' physical and philosophical wanderings.

Several McCahon themes are present, notably the late artist's use of stark white numerals. Indeed, the gallery's main exhibition space has just such a work currently on display. More importantly, Reynolds has riffed on McCahon's religious symbolism. The number of panels equals the number of Stations of the Cross, and the panel colours include a strong Marian blue.

The Stations of the Cross are directly referenced on a lower panel, alongside a map of Reynolds' travels in Dunedin. The work's title thus has a triple significance: McCahon's waterfalls, a lost (and possibly drunk) artist's stumbled walk in a strange city, and the three times that Jesus fell on the path to Calvary.

The work is a strong homage to McCahon and makes a powerful addition to the art gallery's Big Wall. 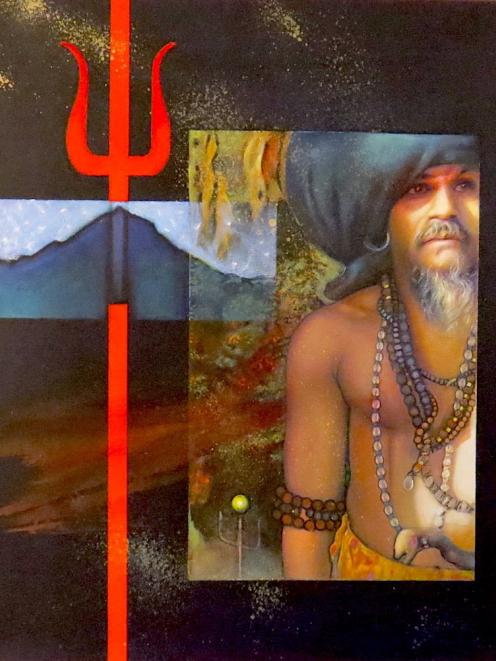 The tragic events in Christchurch earlier this month have sadly made Michelle Annand's exhibition at Robert Piggott Gallery more poignant than they might otherwise have seemed, though even out of that context, the works are an impressive cosmopolitan amalgam of cultures across North Africa and Asia.

Using the traditional religions of countries ranging from Egypt to Nepal as a starting point, Annand has created a group of works, each juxtaposing daily life, tradition, and history.

Perhaps the most impressive feature of the works is the way the artist has been able to successfully combine various styles within individual works. Several of the pieces include geometric and gestural abstraction alongside photorealistic and impressionistic representationalism, all without the artist skipping a beat.

Quite a number of the images, many of which are placed as panels within the larger canvases, would stand up in their own right. Among these are images of a smog-heavy Delhi (in Breathe Delhi) and a fine portrait of a Shaivite priest (in Holy Mountain of Tiruvannamalai, Shiva/Parvati).