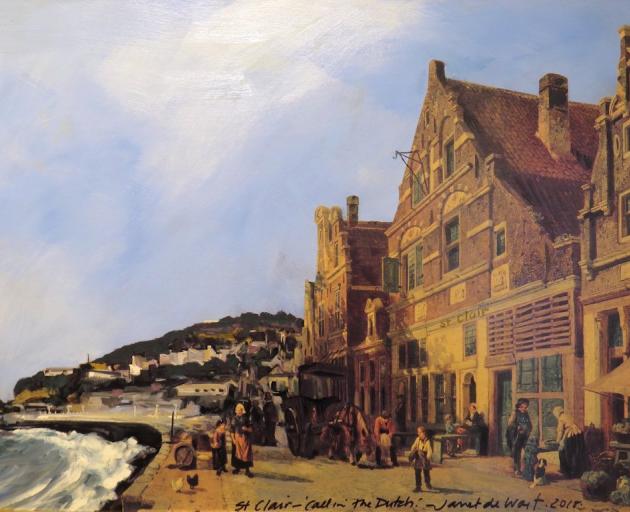 Janet de Wagt has produced a multi-layered exhibition that is at once tongue-in-cheek, poignant and attractive, and in doing so has - in this reviewer's opinion - produced one of the city's exhibitions of the year.

Starting with a group of reproduction prints of old master paintings, De Wagt has embellished these works with paint to produce works no longer set in Enlightenment Europe, but now set deep in the heart of 21st-century Otago.

In doing so, she has posed a series of thought experiments on the relationship between today's Otagoites of settler stock and their European ancestors.

Each work has been coupled with a panoramic land or seascape, tying the images even more thoroughly into present-day Otago. The reproduction works, presented in gilt frames, sit comfortably alongside these unframed vistas, the gilt acting as if to circle and draw more attention to the characters and buildings within the borrowed works.

Several of the pairs have been formed into environmental comments by the artist, focusing on such concerns as global warming and protection of the New Zealand environment.

This postmodern, post-Banksy subversion of the original paintings is audacious yet almost totally successful, making for a delight of a display. 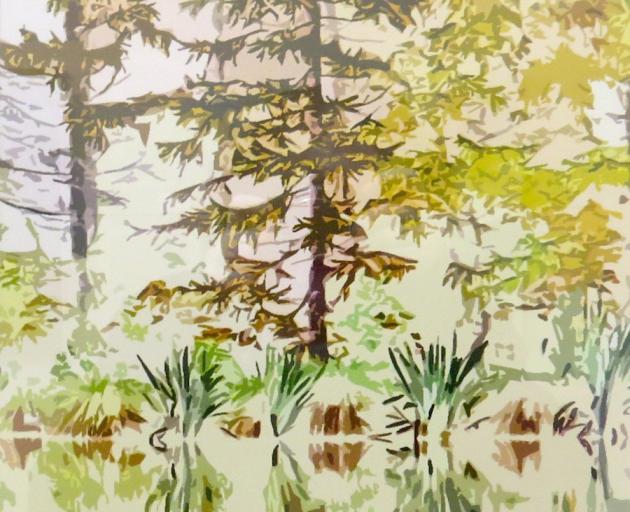 As the name suggests, ''Paint and Pixels'' is two exhibitions within one, showing both photographic manipulations and paintings by Jenny Longstaff.

Longstaff's photographic work makes considerable use of computer programs such as Photoshop. By skilful use of these tools, the artist creates kaleidoscopic patterns from single images. Photographs in which complex patterns and strong contrast are present provide the best sources, notably in images such as Frosted Ferns.

Other fern-related images, such as Fated to Fade, have been tiled to create strong rhythms reminiscent of tukutuku panels. Traditional styles are also invoked by the almost tapa-like repetitions in Longstaff's ''Net Knit'' series.

Alongside these works sit the paintings, many of them also based on photographic originals. The majority of these pieces have a vague stained-glass feel to them, with areas of colour separated by thick black lines. This is at its strongest in the ''Plant Series'' of works such as Succulents. Three works stand out from the paintings: the map-based Breathing Space and two meditative - and far more naturalistic - studies of lakeside trees.

The artist has given extensive information about her thought processes in creating the works, which is fascinating, but perhaps removes a little of the air of mystery from the pieces.

Rachel Hope Allan's exhibitions are not for the squeamish. Her last exhibition at Robert Piggott Gallery dealt with the thin line between life and death in the context of a car crash. Her current exhibition looks at human exploitation - sometimes with sincere motives - of animals.

The artist's research has taken her to zoos, museums and abattoirs. She has explored with her camera the aspects of scientific categorisation and fetishisation of living creatures and their mortal remains. In doing so, she has produced a series of daunting, visceral images.

Many of the photographs are heartbreakingly sad. Zoos, though their intention is good, are still all too often places where animals slowly go mad in cramped conditions, separated from their own kind and their need to roam free. Other images, showing displays of dead museum exhibits, also provide food for thought.

Most startling, however, is the fact that it is often difficult to separate the two groups of images: zoos become a form of museum, with the exhibits alive but in a drawn-out dying process. Rachel Hope Allan's images give us serious pause for thought as to whether such living displays are still needed, and if they are, how they can be improved to give animals dignity and wellbeing.