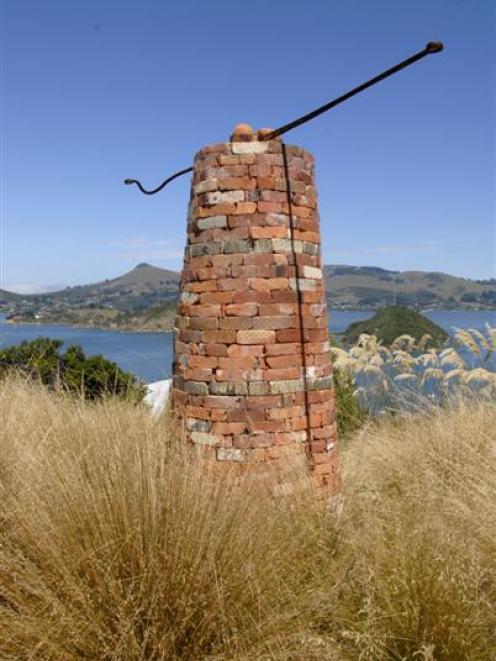 Brick Column, by Russell Moses. Photo by Gregor Richardson.
Outside of the public institutions, Dunedin galleries seem to take long exhibition breaks over summer, so roll on February and the return of regular exhibitions.

In the absence of new work to discuss, we will focus on a local highlight that deserves to be better known and is perfect for a visit on a lazy summer's day.

You can even take a picnic lunch with you to enjoy at Hotere Garden Oputae at Port Chalmers.

The award-winning native garden features four impressive sculptures in one of our most picturesque locations.

It is also a permanent reminder of the conflict between the aims of big business and those of the wider community.

In the late '80s, debate raged over Port Otago's plan to destroy Observation Point, where Ralph Hotere's studio was located.

It was eventually demolished in 1993 and the resulting garden, which opened in late 2005, formed part of the settlement between the two parties.

As a result, two of the works feature dates, that of original creation and that of reconstruction, as all four works had previously been displayed at Hotere's Observation Point studio.

The works are linked not only by their association with Hotere, and this contested location, but also by their engagement with environmental concerns.

Each work inspires consideration of the natural environment and human impact upon it.

Appropriately, the first sculpture you encounter is Ralph Hotere's Black Phoenix II (1991, pictured at right), which like its namesake, arose from the flames.

Its arced form uses part of the hull of the fishing boat Poitrel, which was burnt in a fire at Careys Bay boat-building firm Miller and Tunnage in 1984.

Hotere has added two stainless steel panels emblazoned with textual references to its origins and his now familiar personal iconography.

Red glints through the work in the sunlight where small pieces of red stained glass have been attached to the back of the sculpture.

Turning to the left, we see Chris Booth's Aramoana (1982), an imposing sight.

In form it is reminiscent of a ship's mast and rigging, minus the sail. The vertical central pole bears its name, carved into the wood.

The horizontal beams that project outwards in various directions feature long strings of shells and other beach symbols, further highlighting the specificity of place.

The reference to the vessels that brought us here and that remain central to the life of Port Chalmers is melded with an environmental message.

This piece, too, responds to an important local ecological fight with which both Booth and Hotere were involved.

The plan to build an aluminium smelter at Aramoana so appalled many citizens of the area that they declared their independence and created passports, stamps and other symbols of their dispute with the State.

Shona Rapira Davies, who is of Ngati Wai descent, often references Maori mythology in her work and this piece (left) is no exception.

In They do cut down the poles that hold up the sky (1989), she depicts a male figure standing on his head, with his legs pushed up into the sky, evoking the Maori creation myth in which Ranginui and Papatuanuku are pushed apart by their son Tane, god of the forest.

The title, with its use of the pronoun "they", makes comment on the ecological crimes of Pakeha settlers, who decimated forests in their seemingly endless quest for arable land.

Brick column (1991), by Port Chalmers artist Russell Moses, is a round tower-like work constructed from recycled bricks and a long rusty rod, which balances precariously across the top.

The initial sense of uniformity one gets from the tower is quickly displaced as the viewer notices the individual features of the bricks.

Bricks are symbolic of the land from which they are made but also of human attempts to shape and control that land.

The tower evokes a sense of balance and harmony but also impermanence.

Moses seems to embrace this transience, so at odds with the history of human endeavours.

You are sure to leave Hotere Garden Oputae feeling exceedingly lucky that Ralph Hotere has chosen to share his remarkable collection with the community.