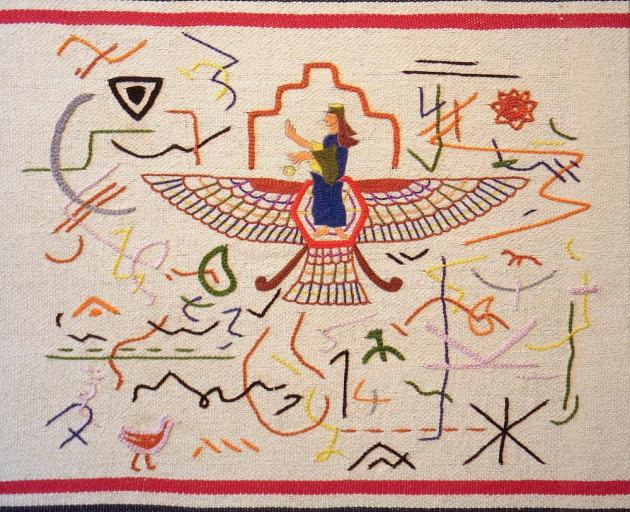 A Bildungsroman is a story of a protagonist’s journey from adolescence to adulthood, from uncertainty to self-assurance. It is a perfect title for Areez Katki’s exhibition at the Otago Museum’s Skinner Annex.

Katki’s bildungsroman is a geographical and metaphysical trip from the artist’s Auckland home to his birthplace in India and from there to his ancestral homeland of Iran. The artist has soaked up influences from the West and East, presenting the results as embroidered panels that speak to his genealogy and to the cultures and societies he has immersed himself in along the way. The panels are interspersed with photographic mementos of the artist’s travels.

Katki’s images are created largely with traditional motifs and fabrics. Many of the works feature symbols taken from Zoroastrianism, an ancient religion still practised in Iran and India. The works celebrate this religious heritage, but also memories from the artist’s childhood. They also reference the politics of gender and sexuality in countries with strict religious codes. As a gay man, travelling within Iran was not without its dangers, and the artist is keenly aware of this repression and also of the generally subservient roles of women throughout the region. These threads combine in Katki’s art to create work that is attractive and has a subtle but strong political message. 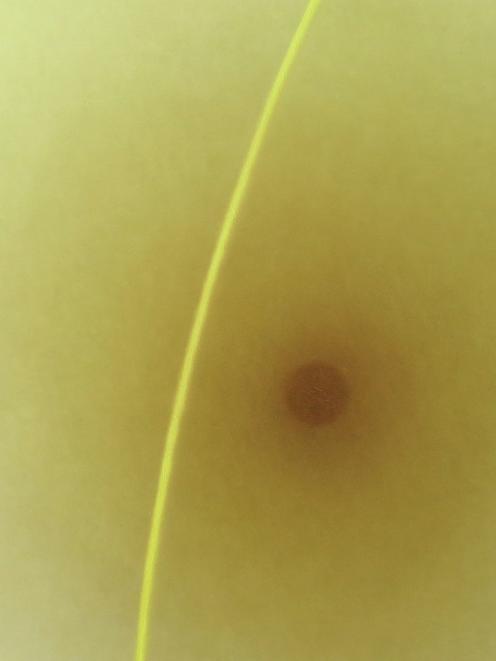 Eliot Coates’ abstracts, painted in suffused colours on an aluminium backing, glow from within and create a sense of calm with their subtle soft colour shifts.

One of the intriguing features of Coates’ work is the strong feeling of depth that the artist is able to create from slow, almost imperceptible gradations of colour and tone. The soft, gradual changes of the works also give the feeling of looking at a tiny section of a far larger image, as if under a microscope, and that there is somehow the possibility that if we were to draw back to a great distance, some larger picture might resolve into understandable form.

The colour-field paintings have no obvious centre, no point to which the eye is instinctively drawn, yet their internal rhythms and depths are enough to create a contemplative effect. As with traditional Japanese Zen gardens, the minimalist aesthetic can create subconscious associations between the areas of light and shade, form and line, causing the viewer to feel a sense of calm. The aluminium base enhances this by producing the illusion that the paintings are lit from within. Walking past the works affects the way in which light is reflected back from this substrate, causing them to appear to subtly change their tones. 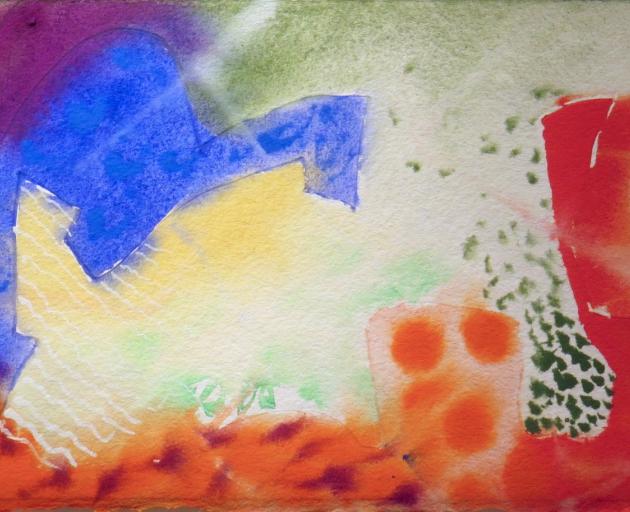 Abstraction is also the order of the day at Fe29 Gallery, but the subtlety of Coates’ soft colour fields is replaced by strikingly bright coloured forms. Angus de Lange’s work, created using strong areas of gouache paint applied to thick wet art paper, has a confidence of line and a strength in its use of colour.

While the seemingly arcane internal language of de Lange’s images might make ‘‘reading’’ the individual works a hard task to the casual viewer, there is enough brightness and energy to create an enjoyable exhibition. The abstracts are complemented by a group of small ceramic and sculptural works, among them a series of fine glass forms by Emma Camden.