Roel Schouten, of Ravensbourne, has long dreamed of turning his self-taught craft skills and love of beautiful handmade objects in to a full-time profession. Seven weeks in lockdown and Level 3 have given him all the time and incentive needed to get moving. Now people from throughout New Zealand are responding enthusiastically to his creations.

Since childhood, Schouten (47) has loved making things. A musician, he has also always been fascinated by musical instruments of all kinds. And then there is the constant flow of creative ideas. 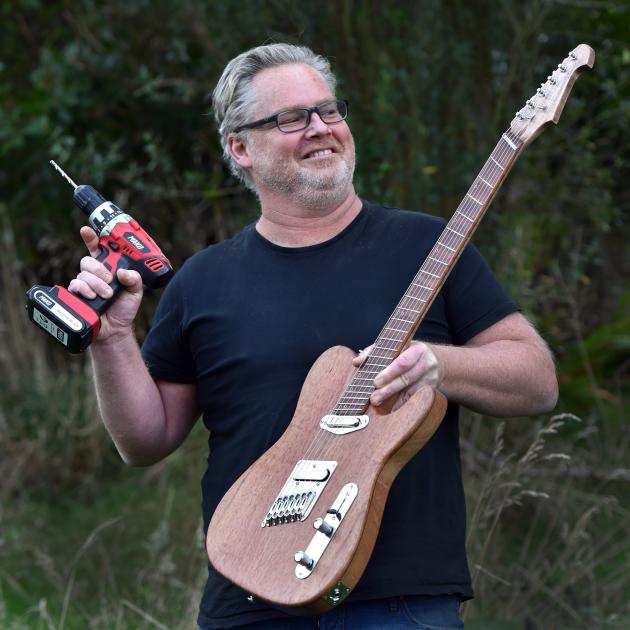 Roel Schouten, of Dunedin, who enjoys crafting beautiful things from wood, has been busy in his workshop since orders started flooding in during the Covid-19 lockdown. PHOTOS: PETER MCINTOSH

"I’ve got so many ideas bubbling away that I’d like to develop," he says.

During the past decade, he has dabbled in a number of creations — kinetic sculptures, wooden drums and handmade guitars — and even sold several through galleries. But a need for a steady income, an interest in wildlife conservation and the distractions of life have kept him from pursuing the full-time craftsman goal.

When the Covid-19 pandemic hit, Schouten was working as a tour guide for Dunedin-based tourism operator Elm Wildlife Tours. As visitors hastily departed and borders closed, the season was cut short. Without a job, living on the Government’s emergency response wage subsidy, Schouten found himself on his own in a Level 4 lockdown.

It was not long before he began pulling out his tools and materials and making things.

The kinetic art is primarily wooden, jointed whales that, with the aid of wires and handles, "swim" through the air or through a paua shell ocean. 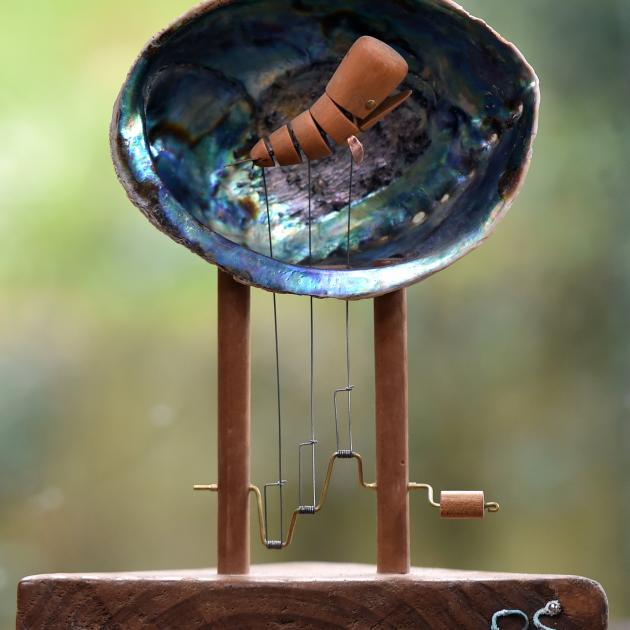 Schouten’s kinetic art, such as this wooden whale ‘‘swimming’’ in a paua ocean, has been garnering a lot of online attention in recent weeks.
"I’ve been doing the kinetic art for about eight years. My friend Blair Somerville, who is known as The Last Gypsy and lives in the Catlins, showed me how to make the whales. And I’ve developed the idea from there."

Other works include a rotating kina shell lamp.

Cajon drums, which one sits on to play, have been used in flamenco music since Spanish explorers adopted the idea from Indians native to Peru.

"Those two there," he says, pointing to the distinctive box-like seats in the corner of the room, "were made from an old rimu chest of drawers".

Schouten prefers to use native timbers, sourced from another friend in the Catlins as well as from demolition yards and discarded furniture.

His first musical instruments were cigar box guitars, a natural choice given his enjoyment of the blues.

Schouten’s latest electric guitar, completed last week, is a modified kit based on a well-known design but with his own modifications and one-off treatments.

The back is rimu and the front is burly red beech. The fret board is curly beech and the frets themselves are angled to create a multi-scale fingerboard.

"I like the creation process. It’s really cool to see an idea turn into something real," he says.

"And I get a real kick from seeing people using and enjoying something I’ve made, whether it’s a wooden whale or a guitar."

At the end of April, a friend invited Schouten to join an online group where he posted photos of his products.

The response has been huge. Hundreds of enthusiastic comments have flooded in.

So, too, have the inquiries and orders, from throughout the country.

The response has taken Schouten by surprise. He has had to order in more supplies and has been holed up in his basic, basement workshop ever since.

"I think it’s awesome. It’s great that people are wanting to get behind the whole push to support New Zealand-made.