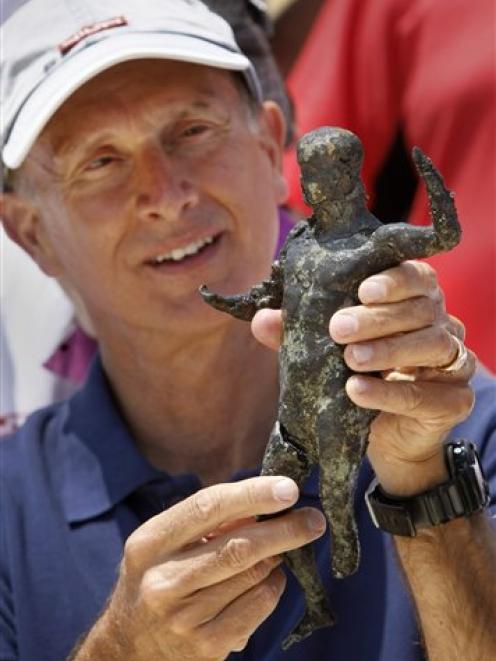 French underwater archaeologist Franck Goddio shows a recently excavated bronze cult statue found in the Temple of Isis, onboard the Princess Duda research boat, anchored in the harbor of Alexandria, Egypt. Photo by AP.
Was Cleopatra a conniving temptress who seduced her way to the top, or the target of recorded history's most effective negative political campaign?

A splashy exhibit making its world premiere at The Franklin Institute in Philadelphia makes a case for the latter, using recently discovered artifacts to illustrate two archaeologists' search for the truth - and the tomb - of one of antiquity's most maligned figures.

Cleopatra: The Search for the Last Queen of Egypt, features many never-before-seen artifacts from a pair of ongoing Egyptian archaeological expeditions. It remains in Philadelphia until January, when it begins a tour of five not-yet-announced American cities.

The show employs theatrical lighting and sound, 17 video screens documenting archaeologists uncovering some of the 150 artifacts on display, and a four-minute video providing an overview of Cleopatra's life and loves in a style that looks and sounds like a trailer for a slick action movie.

"We're using ancient objects to tell a modern-day story about the search for Cleopatra," said John Norman of Arts and Exhibitions International, the company that organised the show.

The first of the exhibit's two sections showcases the discoveries of French underwater archaeologist Franck Goddio, whose 20-year Egyptian expedition so far has uncovered Cleopatra's palace, two ancient cities near the coast of the ancient city of Alexandria, and 20,000 artifacts and counting.

"These are the most important, the most beautiful of what we found," Goddio said.

The artifacts range from tiny gold coins to a pair of towering eight-tonne granite figures. All were raised by Goddio's team from submerged ruins near the coast of ancient Alexandria, where Cleopatra was born in 69 BC and where 39 years later, the legend claims, she chose a suicidal bite from an asp over capture by the conquering Romans.

Visitors will see, through a glass walkway under their feet, artifacts long hidden under the harbour's sediment after earthquakes and tsunamis submerged ancient Alexandria more than 1500 years ago.

"We have found less than one per cent of what is there," Goddio said. "I need three or four centuries to complete the entire excavation. I'm trying to stay in shape."

In the second portion are never-before-seen finds of Zahi Hawass, secretary-general of the Supreme Council of Antiquities in Cairo. Hawass, whom visitors may recognise from his appearances on archaeological documentaries, describes in a brief video his quest for the lost tomb of Cleopatra and her lover, the Roman general Mark Antony.

Hawass believes an artifact trail of sculpture, jewellery, mummies and subterranean shafts is leading his team tantalisingly close to the resting place of the ill-fated couple.

"As each new treasure is discovered, it could be the one that holds the answers to the mysteries surrounding her life," Norman said.

Beyond the historic items, the show examines the mystery and enduring legend of the iconic queen who remains a figure of fascination thousands of years after her reign.

Cleopatra is an enigma in part because the conquering Roman general Octavian - later known as the emperor Augustus - ordered all images of her destroyed, so little evidence exists of what she looked like. Roman writers also posthumously painted her as nothing more than a cold-hearted seductress of Julius Caesar and Mark Antony.

"What we do know is that she was extremely intelligent and very devoted to her country and her children," said David Silverman, an Egyptologist and curator at the University of Pennsylvania Museum of Archaeology and Anthropology.

Attitudes toward women at different periods in history also changed how her story was told, and wildly contradictory portrayals of her in literature and art over the centuries have further clouded our view of her. The artifacts in the exhibition provide a peek into her times and the ongoing search for the real Cleopatra.

"We know about Cleopatra through pop culture, we know her as Elizabeth Taylor," said exhibition designer Mark Lach, "but one of the reasons this is so special is that now, here, you're seeing her world."