Finding the way to paradise

Artists (from left) Mike Nock, Harold Anderson and Ewan McDougall at a rehearsal for their upcoming concert. PHOTO: SUPPLIED
They bonded over comments on United States President Donald Trump and now the creative collaboration between  Dunedin artist Ewan McDougall and American musician Harold Anderson is about to come to fruition. Rebecca Fox talks to Anderson about music and his love for New Zealand.

It is also the year American musician Harold Anderson becomes a citizen of New Zealand.

He had immigrated to New Zealand in 1984 with his then Kiwi wife, living in Auckland before shifting to Dunedin.

``Dunedin was quite an adventure.''

They lived in Tomahawk Rd and enjoyed walks on nearby beaches and golf links as well as its close proximity to Otago Peninsula and its walks and wildlife.

``They're such gorgeous spots.''

It was also special culturally. He did his master's degree in music composition at the University of Otago.

``We got to spend time with the likes of Ralph Hotere and were lucky enough to interact with some really great New Zealand artists, especially musicians.''

He moved back to the United States and taught music at Dartmouth University, before returning to New Zealand in 1999 when he was made an Otago University Mozart Fellow.

By that time New Zealand had gotten into his blood. 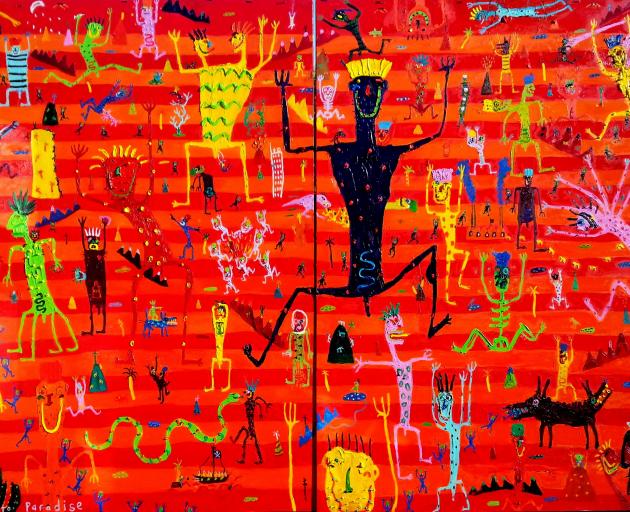 The work that started it all — The Way to Paradise (2015), by Ewan McDougall.
Anderson was based in Maryland during that time to be near his ailing mother and has remained there, continuing to teach music at tertiary level until he retired two years ago.

One of his projects is a concert inspired by Dunedin artist Ewan McDougall's painting Return to Paradise.

The pair had been corresponding on the internet through social media sites when McDougall posted a picture of Return to Paradise.

``It's almost like a music manuscript, with different figures dancing on the grid.

``I decided to translate it into music.''

He spoke to McDougall to get his interpretation of the painting.

``A major feature of the painting itself is it is very whimsical but also serious.

``It reflects Ewan's orientation to painting, whereas for me, music is my way to paradise.''

The music has been written to allow for improvisation to be mixed with set pieces.

The pair have arranged for the music to be performed in Dunedin and Auckland by a range of classical and jazz musicians, including Anderson and New Zealand jazz pianist Mike Nock.

McDougall's painting will be on display at the concerts.

When asked if he had done similar projects in the past, he said, ``I'm very old ... I don't think so, not in recent memory''.

He has created music keyed to visuals before - such as a concert in the 1980s where the music complemented a poem by Cilla McQueen, who was also a Robert Burns fellow in the late 1980s.

``It was mapping one sensory realm to another, but it wasn't nearly as dense or extensive as this - it's bordering on epic.''

Anderson said he was looking forward to returning to New Zealand, ``especially given the current political horrors in the United States''.

``I lived in New Zealand during a really formative part of my life, so I think I'm a hybrid American-Kiwi - maybe more Kiwi than American in some of my values.''