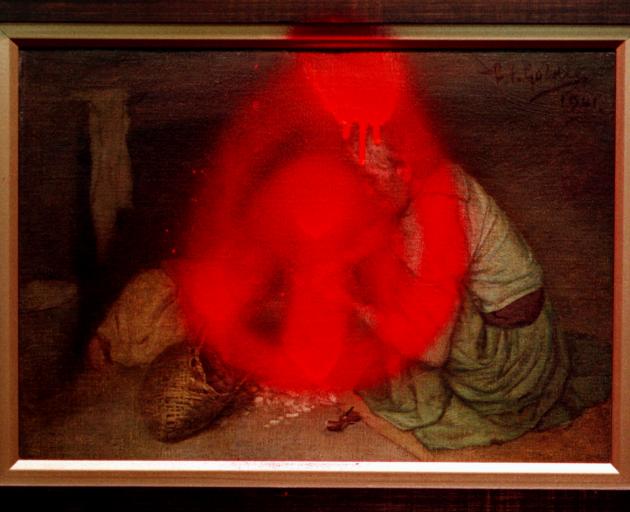 The vandalised Goldie, attacked at the Dunedin Public Art Gallery. Photo supplied.
Money, mystery and intrigue - art crime has it all, but in reality it can have devastating and emotional consequences. Rebecca Fox discovers New Zealand, including Dunedin, is not immune.

A Goldie is stolen from a bedroom wall, another work by the top New Zealand painter is vandalised in a gallery, and a group of paintings becomes embroiled in an international dispute over ownership.

These are just some of the art crimes to have taken place in Dunedin.

Art historian Penelope Jackson, author of the recently released Art Thieves, Fakers and Fraudsters the New Zealand story says Dunedin is not unusual as there are very few places in New Zealand untouched by art crime of some form.

The term art crime covers many sins, including vandalism, theft and forgery as well as wider issues arising from advances in technology.

It also covers ''art'' in many forms, from the traditional painting and sculpture to medals and even church vestments.

In the few weeks prior to her book being released, cases of art crime being reported included the theft of pounamu from a dealer gallery on the Kapiti Coast, vandalism of a statue of Captain Cook in Gisborne, the theft of church vestments from St Peter's in Wellington, and there was a debate over ownership of Maori paintings after they were stolen from a boardroom.

And that is just the art crime that is reported. Jackson says much goes unreported because of the fear of copycat crimes.

So any thoughts people might have about New Zealand not having an ''art crime'' problem were naive. 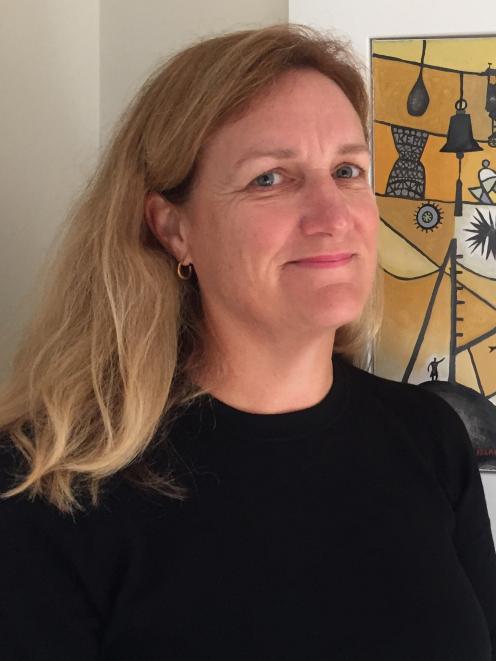 ''Perhaps it is not as much as you might see on an international scale, especially in Western Europe, but it is ongoing.

''You realise wherever there is art, there is a back story about crime as well. Art is used for laundering money, it is used instead of cash, used to exchange.''

Jackson, as an art historian, has always been aware of art crime, especially in relation to the art stolen during conflicts such as World War 2, but it was not until she met and became involved with the family of painter Edward Bullmore in the early 2000s that she realised how alive and well it was in New Zealand.

Bullmore, Southland born and Canterbury trained, developed his career in London alongside the likes of Ralph Hotere and Pat Hanly but died suddenly in 1978, aged just 45, leaving behind a large body of work.

That work was entrusted to the care of Bullmore's younger brother Maurice, who would also become the sales agent for some of the works.

That included a personal family work being sold to Te Papa though documents clearly indicate it was not to be sold.

''It is one of the most private of works that is in the most public of collections.

''That it happened within a family people find pretty shocking.''

Her experience with the Bullmore case sparked her interest in New Zealand art crimes and she began to research the topic, realising after some time she had more than enough to fill a book.

She has also spoken internationally on the topic, including at the 2014 Association for Research into Crimes against Art conference in Amelia, Umbria, Italy.

''People are already telling me more stories. There is enough for volume two. I always knew that. It certainly isn't a definitive book.''

One case she came across that really ''touched'' her involved the portrait of a Maori woman by Charles Frederick Goldie, one of New Zealand's most well known and controversial painters, that was stolen from the wall of a Mosgiel home in 2008, possibly during an open home.

As a result of the circumstances of the theft, the insurers did not pay out and the family was left to deal with the loss of a painting that had been in their family for more than six decades.

''It's always awful when someone takes art. Replacing art is problematic. Yes, you could buy another Goldie but it is not going to be the same Goldie given to your in-laws a decade ago by Goldie himself.

''There is a sentimental value you just can't put a dollar figure on. It's horrific it has never been found.''

A Goldie was also involved in another Dunedin art crime - this time a random act of vandalism. In 1998, a man entered the Dunedin Public Art Gallery, walked up to a 1941 Goldie on loan from a private collection and spray-painted a red peace sign on it.

The painting was able to be restored and the man was apprehended. Vandalising art is a crime under New Zealand's Summary of Offences Act, Jackson says. Although while the works instantly lose market value, the penalty is community work or a fine of $2000 or less.

The other Dunedin case to feature in the book is what Jackson calls the Macchiaioli Affair, a case involving an ''unfortunate set of circumstances'' regarding art sourced during wartime.

While stationed in Italy during the war, Dunedin bookkeeper Arthur Fraser bought a series of eight paintings by artists of the Macchiaioli School, sometimes known as the Italian Impressionists.

He returned home to New Zealand with the works and, after his death, his sister Dorothy Fraser inherited the paintings. Thirty years later, she offered them to the Dunedin Public Art Gallery for a modest sum which they accepted after researching the provenance of the work.

In 1996, the Pananti Gallery, in Florence, asked to borrow the works for an exhibition they were holding. Sending works overseas was something New Zealand galleries had little experience of at the time but in due course they were sent accompanied by a staff member.

However, the works were stalled at a Rome airport and stayed with Italian customs as the gallery discovered the works were listed on a register of stolen paintings from World War 2.

A legal battle ensued, attracting considerable attention, and in the end two works remained in Italy and three returned to New Zealand.

''What was really an act of generosity, kind of turned out to be soured.''

Otago gets another mention in the book in relation to an incident in Queenstown in 2007. A Ralph Hotere painting with an asking price of $14,500 was stolen from a dealer gallery in broad daylight while the owner was out back answering a phone call. While a $5000 reward for its return was offered, it has never been found.

Jackson has illustrated her book with an exhibition at Waikato Museum, ''An Empty Frame: Art Crimes of New Zealand''.

The title comes from the elegant gold frame on show that once held the painting Psyche. In 1942, Psyche mysteriously disappeared from the Robert McDougall Gallery but the frame remains in pristine condition in the collection of Christchurch Art Gallery,

The exhibition also highlights the art crimes of Hamilton; such as bronze sculpture Molly Macalister's Little Bull, located in Hamilton Gardens, being the target of vandals in 1968; Julia King's 2010 award-winning oil painting, Ohiwa Dunes, being stolen from Waikato Hospital in 2012; and The Portrait of Te Haho, purchased in 2001 by Trust Waikato, being identified in 2012 as having been painted by someone other than the esteemed artist Gottfried Lindauer.

Jackson hopes all of the cases in the book, many of which are unsolved, will highlight the issue in New Zealand and underline the need for national registers of lost art and public art.

Art crimes are difficult to solve and, as police resources are always stretched, often don't get the priority victims might like. But there are other ways to approach it, Jackson believes.

In other countries, police forces have dedicated art crime teams whose members are specialists from the art world and are called in when needed.

Galleries are a lot more vigilant and have increased technology and security to ensure the safety of their exhibits, especially around public holidays and other events when criminals commonly target galleries and museums, she says.

She also urged people to be more open about the subject so there are more people looking out for works that have gone missing.

''Wouldn't it be great if some of the missing works turned up or it turned up more information?''

The onward march of technology is bringing its own challenges, as selfie sticks cause people to behave in a risky manner around art, and better copying and printing technology allow legitimate works of art to be copied more convincingly.

The book uses the example of a woman who paid $7500 for Orange Glass by Peter Siddell only to discover it was a digital print on canvas with some brushwork added over the top.

As part of her exhibition, Jackson sent a photo of a work from the museum to China to be copied. The original and the copy are now on display for visitors to choose between. In a similar exercise in the United Kingdom, only 25% of visitors picked the original work.

''I just had to send an email with a jpeg and within three weeks they were back at the museum. It was scarily easy.''

After the exhibition, the copy will be destroyed but what to do with fakes that are in personal and public collections is a dilemma, as putting them on the market is in itself a art crime.

Some countries have a policy of destroying them but New Zealand does not.

All of these cases mean people spending significant amounts of money on art need to do their homework before they purchase, Jackson says.

''Prevention is a really important thing. If you were buying a car for $15,000, you'd go for a test drive, get a mechanic's check, go through the owners' records, the log book, do all the checks.''

In a similar way, potential art purchasers need to do their homework to quiz dealers and auction houses to make sure there are no gaps in provenance.

It is also important for people who own art to look after it properly, Jackson says, make sure they have it well documented photographically, including a record saved away from their home.