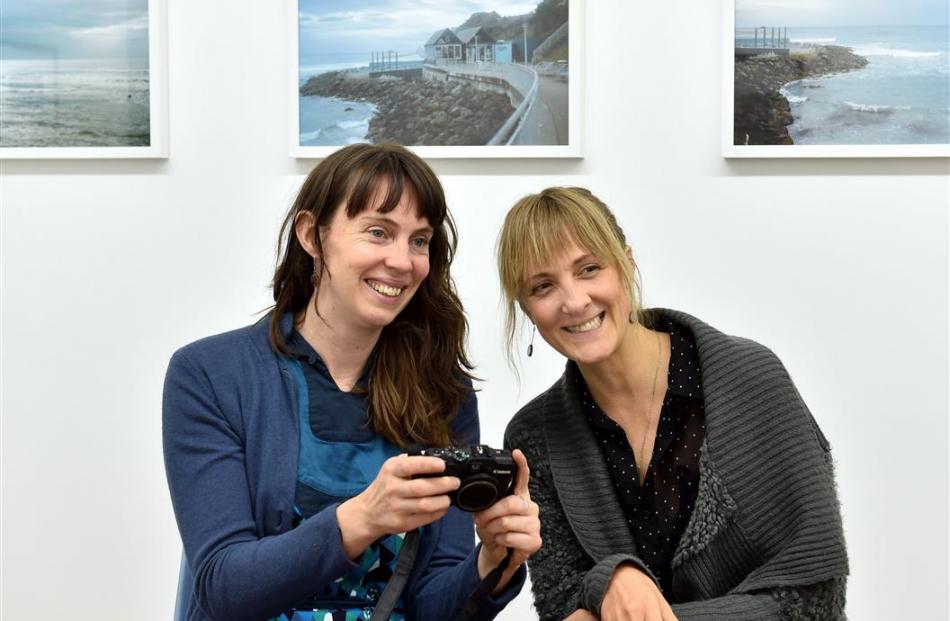 Public artist and designer Beth Ferguson (left) and Zero1 American Arts Incubator programme director Kate Spacek while in Dunedin scoping out their art and science projects on climate change. Behind are photographs of Dunedin coastline by Ngahuia...

There is a role for civic infrastructure to have a creative component, American public artist and designer Beth Ferguson says. 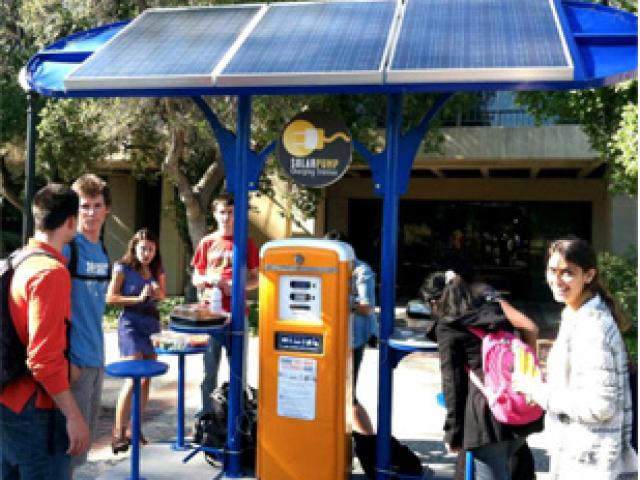 Known in the United States for developing a solar powered charging station in the style of a 1950s gas pump, Ferguson is one of two artists chosen to come to Dunedin as part of a Zero1 American Arts Incubator's project.

The project, funded by the US State Department's Bureau of Educational and Cultural Affairs, has sent artists to countries such as China, the Philippines, Laos, Cambodia and Vietnam, to inspire creative ideas for community engagement around important issues through art programmes.

The bureau directs Zero1, a non-profit organisation from Silicon Valley, to different countries and US embassies select the location and the issue.

In New Zealand, the embassy selected Dunedin and its climate change issues.

After a rigorous selection process Zero1 chose Ferguson, founder of Sol Design Lab and Assistant Professor of Industrial Design at The University of California, Davis, and University of Texas research scholar, and designer-architect Sara Dean, California College of the Arts assistant professor in graduate design, to come to Dunedin.

‘‘It was serendipity, what an amazing fit they are,'' Zero1 programme director Kate Spacek said.

‘‘We want to use our various backgrounds to find creative solutions.''

Spacek and Ferguson visited Dunedin last month to speak with community groups and organisations to ‘‘scope'' out their month-long project which will be completed as part of Dunedin's International Science Festival.

Dean and Ferguson are developing a Climate Kit as part of the project and are collecting tools used for climate fieldwork from scientists, artists, designers and citizens.

The kits will be enacted and exhibited, along with a catalogue of the full tool collection, in Dunedin.

The pair also plan to research archival material such as historical photographs showing coastal change along with information on the impact on species such as the yellow-eyed penguin as well as collect climate data on weather and air quality through sensor technology and anecdotes.

‘‘We want to get a holistic picture of the changing climate, to use community wisdom and resources and then see how the exhibition could benefit.''

Ferguson's success with her solar charging station project had led to discussions with a utility company about installing permanent ones.

‘‘That is over five years' work ... but that project is now an emergency meeting place for those who need to charge cell phones and connect.''

It showed that by merging the creative and science ‘‘unexpected results can have a big impact''.

While in Dunedin the pair will lead a five-day workshop helping people learn digital and new media skills so they can use them to discuss the issues that effect them around climate change.

The aim was for Dean and Ferguson to teach art-based approaches and share their skills with the participants.

Then participants will be divided into four groups with each getting a small grant to propose their own idea for a public work addressing a facet of climate change they care about using the skills they have learnt.

Each group will then present their idea to a panel of community leaders and then the American artists will help ‘‘facilitate rapid prototyping'' to help the projects come alive.

The projects will then be exhibited at Otago Museum in August alongside the work the two artists had developed during their stay in the city.

While the artists left after 28 days, it was supposed to be a beginning, not an end, she said.

‘‘The project teams will be required to think about new strategies and ways to sustain their initiatives so the community could engage and contribute.''

Zero1 also planned to continue the exchange of ideas ‘‘virtually'' by showcasing participants work in the US.

‘‘That makes it a real cultural exchange of sharing stories and creativity, as it's a global issue.''