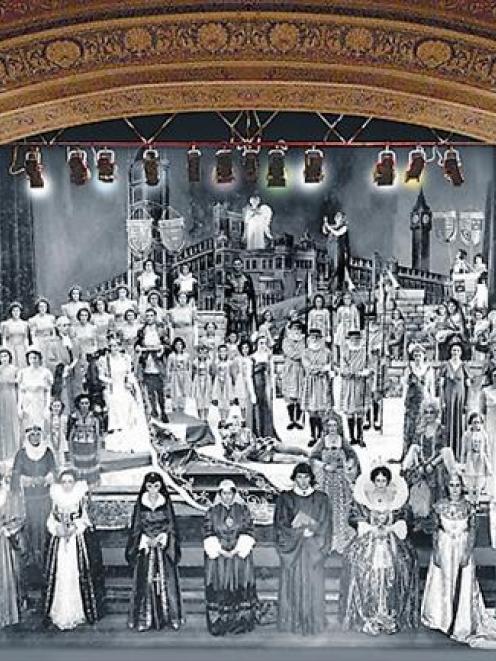 The cast of the 1935 Repertory production of A Man's House. Photo supplied.
The Dunedin Repertory Society celebrates 75 years of breaking legs this year.

It's all drama at the Playhouse Theatre. Nigel Benson talks to veteran director Natalie Ellis.

Theatres are amazing places. They breathe and sigh like living things.

They are often even more fascinating when they are empty, having absorbed the plays, the backstage conversations of actors and the whispered hush of audiences like cooking smells in a kitchen.

One such is the Playhouse Theatre, in Albany St, the home of the Dunedin Repertory Society.

"Rep", as it is colloquially known, plied its trade at His Majesty's Theatre (now Sammy's) and the Mayfair Theatre before moving into the 170-seat Playhouse in 1971.

It bought the theatre for $9000 from the Southern Theatre Trust, the sale including an extensive range of costumes and props considered at the time to be among the best in New Zealand.

The Playhouse had earlier been graced by the splendidly-named Southern Comedy Players, from 1957 till 1968.

"The Playhouse has always had a good feeling. Rep has given a lot of people a chance to display their talents over the years," director Natalie Ellis said.

"It's very good for people to be someone else, I think. It's liberating."

The Dunedin Repertory Society was established in 1934 to produce amateur theatrical productions to a professional standard and now holds at least two major adult productions and three children's shows a year.

It marks its 75th anniversary this weekend with the J. B. Priestley comedy When We Are Married.

"We wanted it to be something that was a celebration. Something really entertaining and good value," Ellis said"We've already sold out the first night and the bookings aren't even open yet."

It will be the third time Ellis has been involved with this play, after performing in it in Mosgiel in the late 1970s and at the Playhouse in 1988.

"Why I like this play so much is the characters do such a lot through the play. The characterisations are marvellous. It's very true to life."

When We Are Married was one of the first productions staged by Rep, when it put on a lavish production in His Majesty's Theatre in 1940.

It was wartime and "just what was needed as light relief at this darkest point of World War 2", according to reports of the day.

They were the golden years of theatre.

"By the time television arrived in the '60s, the huge crowds they got were dwindling," Ellis said.

Although not everyone was enamoured with the newfangled technology.

"People are sick of television," society president Ruby Hannan told the Otago Daily Times, soon after Rep had moved into the Playhouse Theatre in 1971.

"Judging by the response to recent local productions of live theatre, the future looks happy."

Dunedin has long had a strong theatre tradition.

Dunedin Mayor Peter Chin has performed there and Dunedin film-maker Robert Sarkies (Scarfies, Out of the Blue) cut his dramatic teeth at the Playhouse.

Even Dunedin coroner Jim Conradson pops up in When We Are Married, which may be handy if anyone dies on stage.

Real-life husband and wife Bert and Liz Nisbet also return to the stage.

"I was in the Dunedin Operatic and Dramatic Society production of Oliver with the Nisbets at the Regent Theatre way back in 1974," Ellis said.

"A big part of theatre in Dunedin is the people. I've been very fortunate to work with a wide variety of people; like Elric Cooper, Patric Carey, Graham Clifford and Rob Guest," she said.

Ellis has also appeared in New Zealand films, including Out of the Blue and Angel at my Table.

She directed her first repertory show, The Rape of the Belt, at His Majesty's Theatre in the early 1960s.

She charmingly declines to reveal her age.

"I'm a great believer in technique and remembered experience. Getting all the cast working in the same direction," she said.

"We sit down before the play and talk about the play and the characters. I'm always very keen that they bring out the sub-text. That's really important."

You can become a Dunedin Repertory Society member for just $15 per annum, giving you 50% discount on all ticket prices.