Platt goes beyond the wardrobe 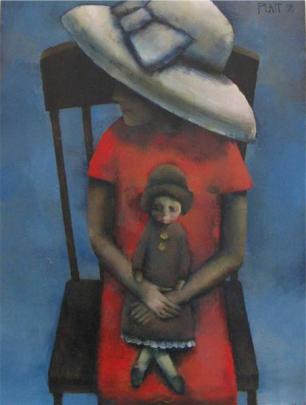 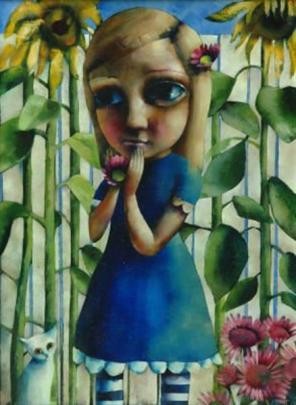 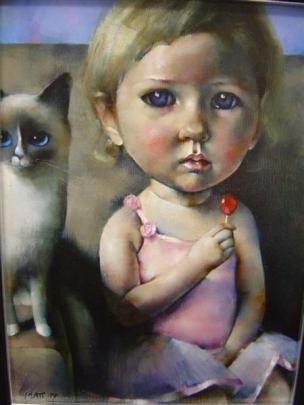 Her baby dolls look nice and safe. Until you look into their eyes. Nigel Benson meets Suzy Platt.

Suzy Platt's paintings could be windows into a dolls' house.

But it's not a happy house.

Despite - or perhaps, because of - the dark nature of the works, they are finding enthusiastic buyers in New Zealand and internationally.

While still a developing artist, the 35-year-old has a growing profile, with her works sought-after by investment art groups, international buyers and local art speculators.

Platt draws on herself and her daughters as muses, painting wide-eyed figures with quizzical expressions.

The young girls look as though they have just been scolded, or are preparing to ask a favour they know is unlikely to be granted.

"We wrap the people we love in cotton wool," she says.

Many of her works blend her observations and imagination.

"[There's] excitement, as if she's fidgeting in her chair. Something else she wants to explore," Platt says of The Orphan's Doll.

"Actually, [she] reminds me of a girl in my daughter's dance class - full of energy and always exploring, fidgeting.

"I think I captured the energy of a child in the bright, vivid colours. Next to each other, they seem to move."

The oil-on-canvas works shorten the distance between the bookends of childhood and adulthood.

Platt's latest exhibition, "Trinkets", is a selection of recent works and opens at Gallery De Novo this weekend.

It is her first exhibition since she relocated her studio to Mosgiel from the old King Edward Tech building in Stuart St.

"Her work is reminiscent of 20th century artists like Modigliani, Matisse and Picasso."

Kerr has updated a booklet she wrote last year to mark the 10th anniversary of Platt's career, which is being re-released in conjunction with the exhibition.

"The strength of her art is it's getting richer with story-telling. There are a lot more characters appearing, which is really interesting," Kerr says.

"The fascinating thing about her work is you have no idea where she's heading. I wonder if she even knows. She's done so many things. I think she's in this huge experimental mode and I don't think this is a conclusive series.

"The warmth of objects, feminine wiles and a host of small companions cross into the play space of the imagination.

"The dolls are almost secondary characters, or a reflection of the bigger girl. There's certainly a mystique about them. There's a feeling of isolation. All these young girls seem isolated," Kerr says.

Platt is the granddaughter of Sir Peter Platt, who was Blair Professor of Music at the University of Otago from 1957 to 1975, and is credited with laying the foundations for the music department.

Sir Peter was born in Sheffield, England, and was a pupil of English composer Ralph Vaughan Williams.

Together with Maurice Joel and Walter Sinton, he established the Dunedin Civic Orchestra in 1966, which went on to become the Southern Sinfonia.

Platt says her grandfather was a strong influence on her career and she has based a series of works, "The Harlequins", on classical music.

Her varnished paintings and strong brushstrokes play tricks with the light and give the illusion of being accompanied by an unheard classical music soundtrack.

Platt's profile has expanded since her works featured in the National Portrait Gallery and Affordable Art Fair in London last year.

"When Heidi and Princess was exhibited in the portrait awards, that was the beginning of her exposure over there," Kerr says.

She has also exhibited in the Fairfax Contemporary Art Gallery in Chelsea and is represented by galleries in Melbourne and Auckland.

"Trinkets" opens at Gallery De Novo at 5.30pm tomorrow and runs until September 26.