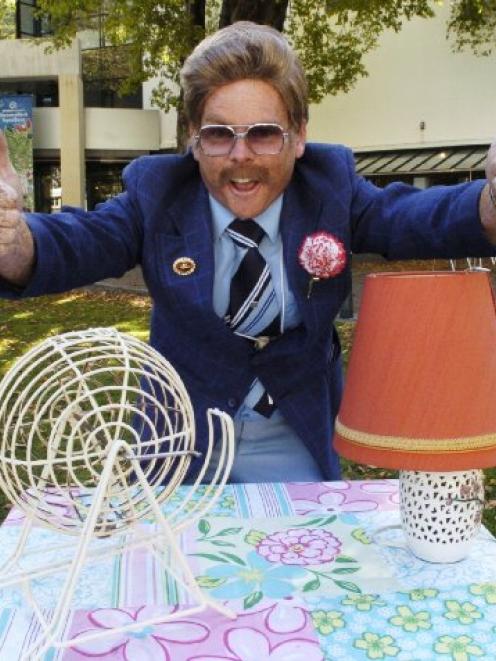 Shay Horay at the Otago Muesum Reserve. Photo by Gerard O'Brien.
Shay Horay - even his name elicits a giggle. Kathryn Nevell looks into some funny business.

The comic performer Shay Horay is in Dunedin for the Fringe Festival, where he stars as super-kitsch bingo caller Keith Preene - a man partial to a Rheineck with a Rothmans chaser.

In contrast, Horay orders a Stella Artois, without flinching - ironic on a day when a festival discussion forum was held on the financial plight of artists.

Horay (29) is one of the lucky few who knew what he wanted to be from a young age and went ahead and did it.

As a 12-year-old in Geraldine, he realised the stage should be his workplace, and pursued that career after finishing high school.

When you split your pants accidentally on stage, and are happy for the extra laughs, you are entitled to conclude you are cut out for the job.

"You have to constantly work at it.

"It takes quite a long time to get to the level of making a living out of it.

"I have done the hard yards... Any other job, if you had been working for 12 years you'd be on a fairly good wicket,'' he says.

The hard yards started aged 18 when, in a harsh application of the showbiz adage "the show must go on'', he went on stage immediately after hearing his beloved grandfather had died.

"We drove past his house about 10 minutes before he died, and I had said, `Nah, we'll stop in later'. My mother rang me at the place. What you want to do is go into mourning, but you have to postpone that because of your job, and the bottom line is that he would have wanted me to do that.''

At the Dunedin Fringe Festival, he is flat out splitting time (not pants) between his comedy bingo show Golden Goose this week, an appearance in Heavenly Burlesque as Rubber Band Boy last week, with the Saturday in between spent in New Plymouth filming for children's television show What Now?

Being busy is good news in his business.

"Otherwise, you're doing the working-in-a-café thing.'' And how often has he done that?

The turning point came about six years into his career when he invented Rubber Band Boy.

It seems covering your face in rubber bands until you resemble an Egyptian mummy is a bit of a crowd-pleaser.

"Basically, I had done the World Buskers Festival [in Christchurch] about six times. I decided to go overseas to Glastonbury. When you are hanging out with the dudes who you used to aspire to, and all of a sudden they become your peers, you start thinking... I am doing all right".

As to exactly how much he earns, Horay says he's doing better than the average wage. In fact, he's about on a par with an early-career school teacher.

But when asked to choose between fame or fortune, he chooses fame (after mulling it over for several minutes and changing his mind twice).

"It's not, for me, about the money. My job is making people laugh and allowing people to have a good time. Everyone needs a few extra laughs in their day.''

His advice to performers trying to make it? "You've got to be diverse with it. That's the way to stay busy. Don't just do TV, or just do live performance. It's not an easy path but if you want it, eventually you get there.''

Later this year, he will perform at the Glastonbury Festival in England, and the granddaddy of the lot, the Edinburgh Fringe Festival.

He seems more excited about Glastonbury and starts jumping around like a Jack Russell at the thought of 180,000 people knee-deep in mud.

It's a far cry from running quiz nights in Christchurch with rockabilly oddball Lindon Puffin. (Do any of these lads have normal names?)

For Horay, success means being able to support his family while continuing to perform, and he is confident he can do that.

"I just got engaged; thinking about having a sprog. To be able to do what I do and support my family - it is possible... [but] I don't think anyone, no matter what their job is, can afford to buy a house at the moment,'' he says.

"She squeezes herself into a box under half a metre in size.''

Horay's character Keith "the Numbers'' Preene is a 65-year-old man who enjoys calling bingo and, in his spare time, exercising in the nude while smoking.

The character is based partly on his grandfather and partly on an ex-girlfriend's landlord.

The audience plays bingo throughout the show, and there is a chance to win a meat pack, kindly supplied by Jon's Retail Meats. (Who said butchers don't support the arts?)

Horay has been a bingo aficionado for some time and hopes to introduce a younger generation to the game while giving the older set a chance to let rip at a night of bingo madness.

Golden Goose plays at the Fringe Lounge, until Saturday at 7.30pm.