The sky's the limit for young director 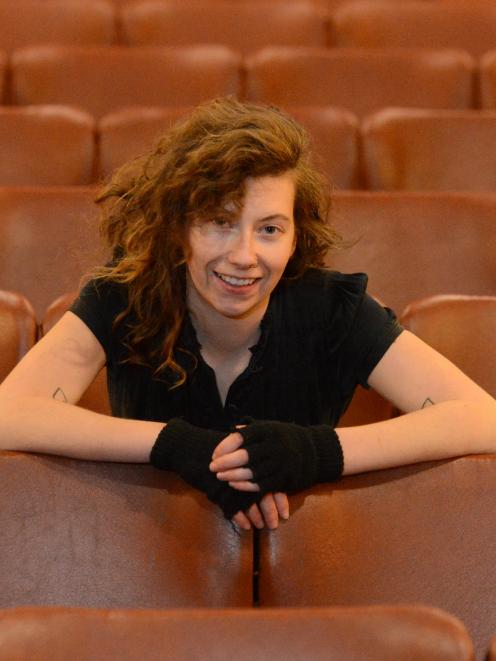 Emma Feather Shaw, who will direct Glitter and Spit at the Athenaeum Theatre from August 6-15. PHOTO: LINDA ROBERTSON
She works three jobs, directs plays, performs in cabarets and organises new ventures. Rebecca Fox finds out how Emma Feather Shaw finds time for it all.

From getting up on stage in her undies and corset with her hairy legs on display to starting her own production company, she gives it all a go.

At just 24, she is determined to make things happen for herself now rather than looking to see what she can do in the future.

''People get so focused on what they want to do in the future. Why don't they do it now? In Dunedin there is a lot of DIY. You just do it.''

She returned to Dunedin late last year - she graduated with a bachelor of theatre studies degree from the University of Otago in 2011- after travelling. Ms Feather Shaw has visited 17 countries in the past few years, keeping active in performance and circus circles along the way.

Now she is back doing what she loves, directing a play for The Globe Theatre.

''I love organising things. I love all the little bits and pieces which come into it - finding the set, finding the frocks, I really love spreadsheets and the satisfaction of crossing something off the `to do' list - like finding a tutu in an op shop.''

Directing for her was like being the ''trial audience'': being able to see the changes needing to be made so the audience got the most from the experience, she said.

''You are the only eyes from out there in the audience that can tell them what is working and what's not.''

She first directed a play for The Globe, Duncan Sarkies' LovePuke, after she graduated.

This year The Globe had a gap in its schedule and approached her to see if she would be keen to fill it. Because of repair work to the theatre, productions were being staged in the Athenaeum or the Playhouse Theatre, which changed what they could put on it the spaces, she said.

''I love the Athenaeum. It's kind of run down, but has so much character. There is plants growing out of the walls.

''It isn't that much different, I remember, to a few years ago directing at The Globe and at the end of the night having to pull tarpaulins over the chairs in the auditorium to stop the rain coming through the roof.

''So working in the Athenaeum is my kind of theatre.''

She decided any work she did needed to be contemporary and from a New Zealand writer, something that appealed to the younger student demographic in the city.

''We need to really kind of target them.''

Given that she had directed a piece on sexual assault earlier this year, she wanted to give her ''heart and soul'' a break from handling heavy topics.

''I was really set on a comedy, getting some comic relief for myself.''

After a suggestion from The Globe's Rosemary Beresford, New Zealand playwright Robert Lord was chosen, only he had written about 20 plays.

''OK we've picked a playwright, he's got this deep connection to Dunedin ... he died here in the early '90s.

''But what play?''A play called Glitter and Spit stood out but it had a running time of only 45 minutes, so she came up with the idea of a double bill, enlisting fellow theatre programme graduate Brownyn Wallace (The Cape) to direct Balance of Payments.

''The description of the characters sold me on Glitter and Spit; the contrast between this woman sitting in a wheelchair in a tutu and this person who gets changed into these odd outfits.''

Robert Lord did satirical pieces on political issues of the day, which was what Balance of Payments was based on, she said.

''It's a family piece. The parents, the son, the vicar and the clients. The parents ''dispose''of the clients of their son. I kind of see it as looking at a dysfunctional family.

''It's ridiculous. Hilarious. But it makes you think what is wrong with this world?''Earlier this year, she started production company Feral Grace Productions and had put on two plays this year, as well as cabaret and poetry nights.

''I love curating, producing and directing. I'd love to be an artistic director of a theatre.''

But she also wants to keep learning and would love to teach, having been inspired by her Logan Park drama teacher the late Denise Walsh.

''I see a lot of her in myself in the way I direct: the big ideas, the ''you know what I mean da, da, da'' as I can't get the words out. I catch myself doing that, I call it my Denise moments.''