THE AIR THAT WE BREATHE
Kara Douglas
Redust Publishing

Between the years of 1943 and 1966, Wittenoom Gorge in Western Australia was home to one of the worlds largest and most profitable crocidolite (blue asbestos) mines, with 20,000 miners and their families living in nearby Witenoom town.

Despite numerous warnings about the dangerous levels of dust at the mine - the blue cloud surrounding the site was apparently used as a landmark by local pilots - nothing was done to protect them from (or even warn them about) the the risks of asbestos exposure and more than 2000 former residents have died of asbestos-related diseases since the mine's closure. 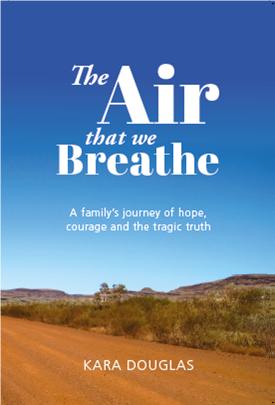 Despite extensive remediation the area remains the most contaminated site in the Southern Hemisphere yet the story of Wittenoom is known by very few, the town having been literally and figuratively been wiped from the map.

In The Air That We Breathe, Dunedin-born writer Kara Douglas examines this forgotten history from the perspective of an ordinary family in order to ‘‘inform, expose, raise awareness and educate people the dangers of asbestos’’.

Like many of the mine workers, Abele and Maria Moretti are an immigrant family lured to Australia by the promises well-remunerated, and the first half of the book describes their arrival and their early years at Wittenoom. Despite initially struggling with the isolation, suffocating heat, and the inescapable dust that leaves indelible stains of Outback red and asbestos-blue on every surface, they eventually find their place in the community.

By the time their daughter Luciana is born Wittenoom has come to feel like home, and when forced to leave 1970 they do so with regret, unaware that that they carry much more with them than mere memories.

The second half of the book is set two decades later when Abele, after being diagnosed with asbestosis, is persuaded to sue Australian Mining Ltd (AML) and its parent company for negligence. A precedent-setting case that will expose a decades-long history of corporate greed and legal malfeasance, it is the first step towards seeing justice done for other survivors from Wittenoom, but it is a pyrrhic victory that  will do nothing to heal the damage already wrought on the Moretti family, with both Abele and Luciana dying shortly after the trial's conclusion, leaving Maria to continue the fight for justice alone.

For Douglas, this history is all to close to home. Her birth father, who lived in Wittenoom, died of mesothelioma at 53, and, although fictional, the novel represents the culmination of a decade of research. Abele is the main narrator, his first-person account interspersedwith those of his daughter, the manager who oversaw the mine in its final years, and the lawyer for the defence, for whom the case unexpectedly assumes a personal dimension.

This diversity of voices encapsulates all the main players on both sides of the story andI can understand why Douglas has chosen to approach the material in this manner. The novel's emotional impact is undeniable, particularly in the earlier sections where we, as readers, know more than the narrator does. It is hard to suppress a shiver of horror as we hear about tailings that line Wittenoom's streets and the banks of the river where the townsfolk swim, or hear Abele describe working in dust so thick he can barely see, then citing the yearly chest X-rays the miners receive as proof of AML's concern for their welfare.

But the illusion of hearing his and Luciana's personal testimonies is punctured when we are given access to their dying thoughts, a shift in focus that feels uncomfortably voyeuristic. And although Abele is highly sympathetic and well developed, some of the other characters, particularly the mine manager (whose utter disregard for the interests of anybody other than himself borders on Trumpian) are less fully realised and I cannot help thinking the story would been just as effective as a work of non-fiction. But this is a minor criticism and The Air That We Breathe is story that needs, and deserves, to be heard.