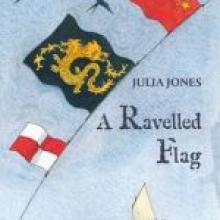 A RAVELLED FLAG <br><b>Julia Jones <br></b><i>Golden Duck
The second book in the "Strong Winds" trilogy is more enjoyable than The Salt-Stained Book, as some of the first episode's nasty characters are developed as actively conspiring against our heroes Donny and Skye, with the (topical) motive of exploiting illegal immigrants.

In A Ravelled Flag, Donny and his growing number of allies are still battling the school and social services, but what first appeared to be immovable bureaucracy is gradually revealed to be criminal malice. As required of all juvenile fiction, the baddies are foiled but are still around, their comeuppance to be looked forward to in the concluding volume, Ghosting Home.

In this, her second book for children, Julia Jones continues with abundant allusion to Arthur Ransome's Swallows and Amazons characters as well as many other works, particularly R.L. Stevenson's Treasure Island and Longfellow's Song of Hiawatha; the writer's skill is evident in the constant references not being too leaden in their effect.